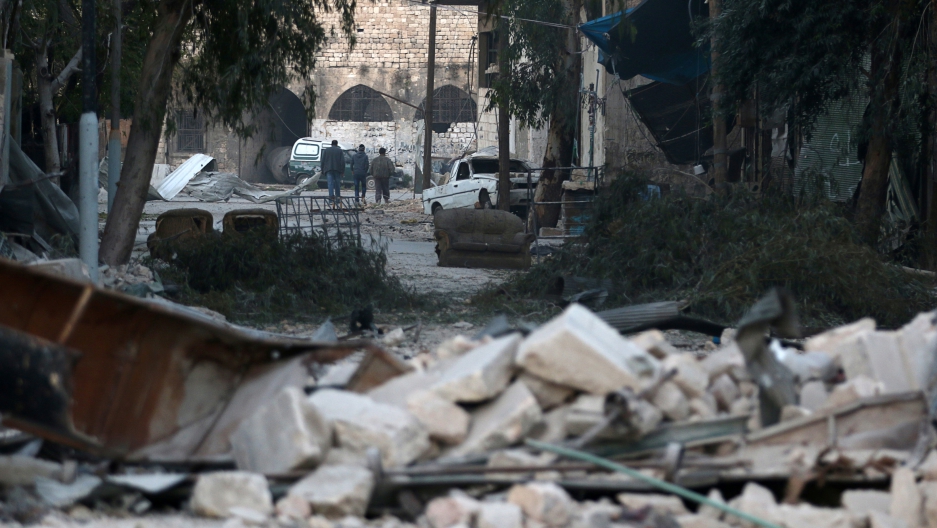 People walk near rubble of damaged buildings, in the rebel-held besieged area of Aleppo, Syria November 19, 2016.

There are no longer any functional hospitals in eastern Aleppo; only 30 trained doctors remain. As Syrian and Russian fighters continue to bombard rebel-held parts of the city, a quarter of a million people there are left without access to hospitals, and the siege shows no signs of abating.

“Civilians are literally being targeted and killed,” said Dr. Rola Hallam, a British Syrian doctor and CEO of CAN-DO, a public health non-profit. “275,000 people do not have access to any health care whatsoever.”

Hallam said the Syrian regime and Russian forces are pursuing a deliberate and intentional campaign to attack hospital and health-care facilities in order to drive the population out of Aleppo. More than 200 people have been killed in the past four days.

United Nations Secretary General Ban Ki-moon condemned the bombardment as a war crime in a statement issued Sunday: “The secretary-general reminds all parties to the conflict that targeting civilians and civilian infrastructure is a war crime. He calls on all sides to immediately cease any such attacks. Those responsible for these and other atrocities in Syria, whoever and wherever they are, must one day be brought to account.”

While the US has been sharply critical of the attacks, it has been unwilling to take concrete action. Though some officials have supported direct military intervention, Reuters reported last month that “US officials said they consider it unlikely that Obama will order US airstrikes on Syrian government targets.” President Barack Obama has been reluctant to involve American forces in the conflict, partly because it brings the US one step closer to a direct confrontation with Russia. Obama may also have an interest in preserving his legacy as an anti-war president.

During his recent visit to Peru, Obama predicted that rebels in eastern Aleppo would eventually fall to Syrian President Bashar al-Assad. "Once Russia and Iran made a decision to back Assad in a brutal air campaign ... it was very hard to see a way in which even a trained and committed moderate opposition could hold its ground for long periods of time,” he said. “I am not optimistic about the short-term prospects in Syria.”

Remaining doctors, nurses and aid workers have continued their work and are reportedly treating patients in basements, homes, and any other available spaces. But there are no facilities where surgeries can be performed. “We need an urgent humanitarian corridor to allow more equipment and supplies in,” Hallam said.

In addition to medical supplies, the UN warns that citizens trapped in Aleppo are only about 20 days away from starvation. The Syrian government has refused to allow food deliveries, offering only truces to the rebels. Currently no aid is being allowed into the eastern part of the city.

Hallam believes the Syrian government’s strategy is to starve out eastern Aleppo. “It’s a medieval tactic and it’s been used in so many wars beforehand,” she said.

Hallam called on the UN and its member states, including the US, to intervene in the conflict, though she doubted they would. “This is our Rwanda,” she said, “It’s a disgrace to the international community.”

President-elect Donald Trump has typically avoided taking a stance on the bombing of Aleppo, instead emphasizing his commitment to “knock out” ISIS.

If you want to help the sitution in Syria, here are a few organizations you might consider.