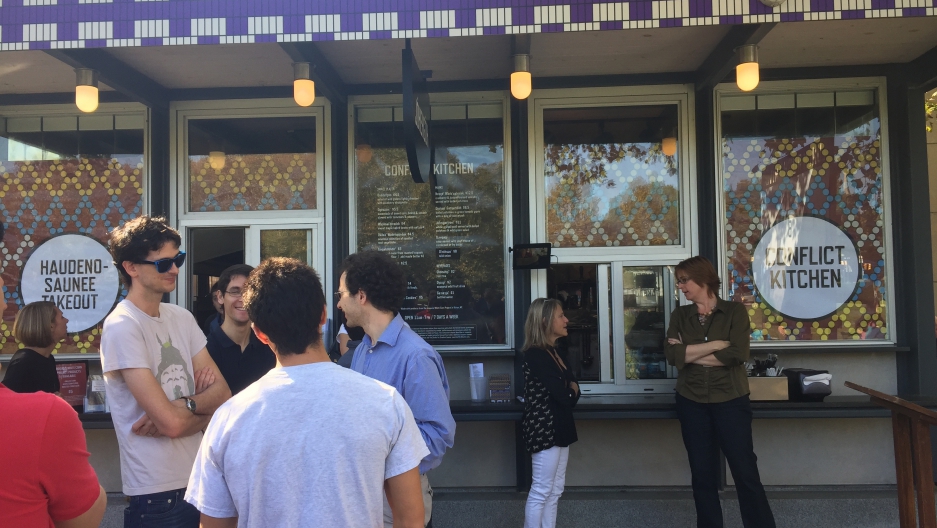 In Pittsburgh, Conflict Kitchen is a small takeout restaurant that serves food from countries with which the US is in conflict.

Back in 2010, Dawn Weleski and her friend and collaborator, Jon Rubin, were sitting around talking about politics — and food. “We were naming cuisines that Pittsburgh didn't have to offer,” Weleski says. “We thought, ‘There’s no Iranian food or Afghan food, and do people in Pittsburgh even know the difference between the two?’”

They quickly realized they were naming cuisines from countries with which the United States is in conflict, and Conflict Kitchen was born.

The idea is simple: Foods and flavors, like cultures, are complicated. Maybe, Weleski and Rubin thought, there was a way to inject some empathy for countries that are often unknown to Americans or make them feel anxious — through street food.

As they developed the project in 2010, there was plenty of tension between the United States and Iran, over Iran’s nuclear program. So, the first cuisine from Conflict Kitchen was Iranian.

It was simple, just one item on the menu.

“We served Iranian 'koobideh,'” Weleski explains. “Koobideh means 'ground,' so it was a ground meat that we made into a sandwich. We called it an ‘Iranian hamburger’ for the average Pittsburgher that never had Iranian food.”

The project exploded, attracting plenty of media attention and customers.

Six years in, the restaurant has featured eats from North Korea, Afghanistan and Venezuela. Right now, they are doing something new: Haudenosaunee food from the Iroquois Confederacy, which is comprised of six Native American nations fairly close to Pittsburgh.

The restaurant is small, a square kiosk with a takeout window that faces a big, public plaza in Pittsburgh.

The project is also an art project; its stall gets renamed and redecorated with each cuisine. Currently, the stall is patterned in white, yellow and blue diamonds.

Around noon, a long line starts to form a half-circle in front the restaurant. Dozens of people, many students and faculty from local universities, scan the menu of juniper-braised venison and quail and sides of cornbread and succotash.

For Blaine Siegel, head of outreach and education for Conflict Kitchen, the crowd is an opportunity for a guerrilla trivia show. Siegel set up a white board and, as people join the line, he yells out trivia questions.

“For a prize, how many federally recognized nations are there within the entirety of the United States?” Siegel calls out.

People call out answers or quickly try to look up the answer on their phones.

While the idea of serving food from countries all over the world doesn’t sound so controversial, Conflict Kitchen has faced its share of opposition.

“I think the version that we did that received the most organized efforts against it was our Palestinian version,” explains Jon Rubin, one of the co-founders.

Rubin says he expected some kind of pushback when they started selling Palestinian food, but the vitriol took him by surprise.

“We received a death threat that we had to close the restaurant for a week,” Rubin remembers. “And it was really quite sad, especially for our local Palestinian community to see that their food, their culture and their stories were being challenged as hate speech.”

Rubin says that he was also surprised by how much their customers loved the Palestinian fare. He thinks it was probably the most popular menu they’ve ever done, and they plan to do it again in the near future. (As well as Syrian food to highlight the war and conversations about refugees.)

Rubin says for some in Pittsburgh, Conflict Kitchen has become a culinary version of "The Daily Show," a place where they look for answers when they have questions about the world.

“[People] are curious about something, and they think we will provide a different entry point to know about the culture or that country than they might find elsewhere,” explains Rubin. “And I think in a small way, we are expanding the level of knowledge within our community.”

That’s definitely happening in line. People keep guessing how many federally recognized Native American nations are inside the United States. After several minutes and dozens of numbers, someone lands on the correct answer, 567.

The winner is rewarded with a free drink. Everyone else learns a bit more about a culture they might know little about.