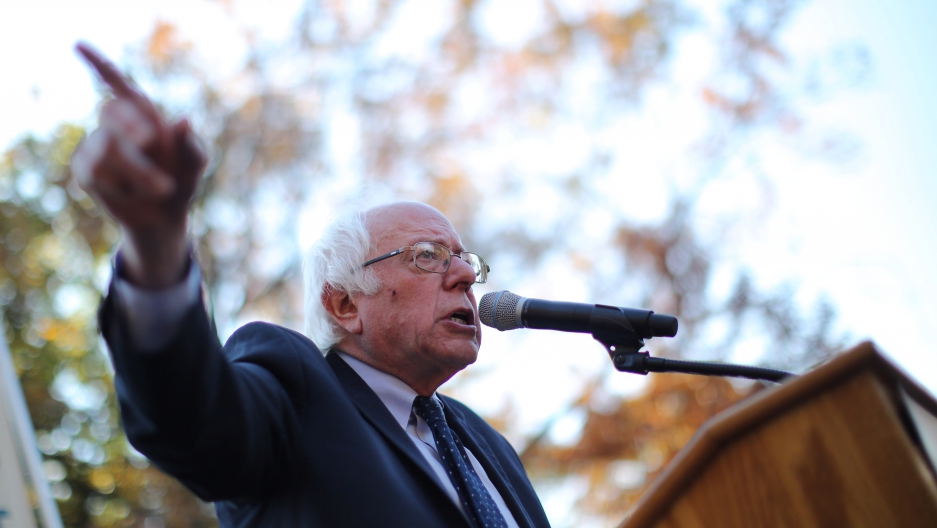 Former Democratic presidential candidate Senator Bernie Sanders (I-VT) speaks during a Capitol Hill rally to promote a people's agenda and a common commitment to stepping up grassroots mobilizations for economic and social justice and equality November 17, 2016.

Six months ago, Senator Bernie Sanders still had a pretty decent shot at becoming president. By focusing on political corruption, income inequality and the threats facing Americans in the next 10 to 15 years, his campaign especially emboldened young people looking for a fresh new perspective on their futures.

That wasn’t enough, though. And, as Sanders points out in a recent interview, ultimately the 2016 election came down to a war of personality, not policy, which was a war he just couldn’t win.

“We had the misfortune about speaking about the real issues impacting the real American people,” Sanders said. “That’s not a good way to get media coverage.”

In his new book, “Our Revolution: A Future to Believe In,” Sanders lays out 10 concrete things Americans can do to fight corruption and carry on the message that inspired so many people to join his side during the primaries. On his list is fighting corporate media and recognizing the power advertisers wield over journalists. That can impact not only the information the public receives, but also the outcomes of elections.

Sanders points out that President-elect Donald Trump sees this media coverage as something he can manipulate and bend to his interests, as evidenced by his recent tweet storm about "Hamilton" and "Saturday Night Live," as well as his treatment of journalists who refuse to meet with him off the record.

“Trump, who is nobody’s fool, understands that if you say outrageous things, you’ll get the media all over the place,” Sanders explains.

The lack of coverage surrounding climate change also greatly concerns Sanders, who points to a clear path as to why the media avoids such a crucial topic.

“Climate change, according to the scientific community, is the great global crisis that we face,” says Sanders. “Yet there is unbelievably little coverage of climate change, and I believe that has a lot to do with the fossil fuel advertising and the special interests that dominate television.”

To fight this type of bias, Sanders recommends holding journalists accountable, and that citizens share information directly — via the internet or interpersonal discussions — to avoid being beholden to whatever CNN or CBS might be saying.