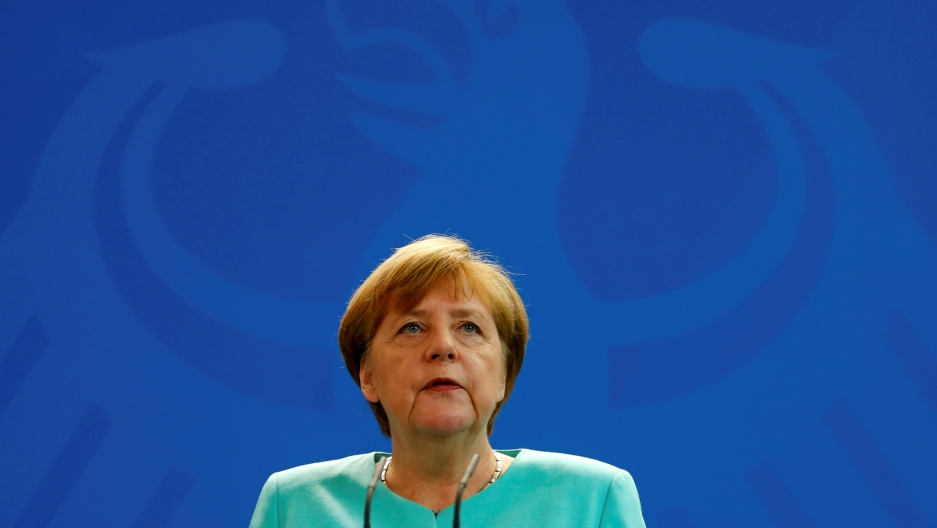 German Chancellor Angela Merkel is shown here giving a statement in Berlin, Germany, on June 24, 2016, after Britain voted to leave the European Union in the EU BREXIT referendum.

German Chancellor Angela Merkel said Sunday she would seek a fourth term in next year's election — to defend democratic principles in the face of looming threats at home and abroad.

Predicting her toughest campaign to date, Merkel said the forces of populism, as well as the uncertainty created by poll triumphs for Brexit and Donald Trump, meant she had a duty to serve her country.

"We are facing struggles in Europe and internationally for our values and our interests and, simply put, for our way of life," Merkel, 62, told reporters at the headquarters of her Christian Democratic Union (CDU) party.

"This election will be more difficult than any before it, at least not since national reunification" in 1990, she added, citing a strong "polarization of our society."

Merkel, the EU's longest-serving leader, said she had "endlessly" weighed her choice and knew that in "distinctly difficult, even insecure times," many leaders were looking to her as a source of stability.

Some commentators have suggested she should be considered the new "leader of the free world," to which she responded, "I am indeed honored but I also find it grotesque and even absurd."

Speaking to German television channel ARD, she vowed to seek a "strong Europe" after Britain voted to leave the bloc.

She has governed Europe's top economic power, which does not have term limits, since 2005.

Another full four-year mandate, which pollsters say she is likely to win, would tie the post-war record set by her mentor Helmut Kohl, who presided over the 1989 fall of the Berlin Wall.

Merkel is the first woman, the youngest person and the only candidate who grew up in communist East Germany to lead the reunited country.

A pastor's daughter and trained physicist, Merkel is popular among Germans who see her as a straight shooter and a safe pair of hands in a crisis.

However, her decision to let in more than 1 million asylum seekers over the last two years dented her support.

It also revived the fortunes of the right-wing populist Alternative for Germany party (AfD), which has harnessed widespread anxiety about migration.

Nevertheless, observers said the recent seismic shifts in global politics were likely to drive traditionally risk-averse German voters back into her arms.

"Merkel is the answer to the populism of our time," said Saxony State Premier Stanislaw Tillich of the CDU, welcoming her candidacy.

"She is basically the anti-Trump," he told the newspaper group, Redaktionsnetzwerk.

More than half of the electorate — 55 percent — want Merkel to stay in office, up from 42 percent in August, a poll for Bild am Sonntag newspaper showed.

While the globe braces for potentially radical changes in US leadership under Trump, Britain is wrestling with the fallout from the Brexit vote, and France is facing a presidential poll in May that could see far-right candidate Marine Le Pen snatch victory.

Underlining her relative strength, Merkel gathered outgoing US President Barack Obama and the leaders of Britain, France, Spain and Italy at her chancellery Friday for talks on the fight against terrorism, climate change and the strategic threat posed by Russia.

Obama praised Merkel as an "outstanding partner," adding that if "I were German and I had a vote, I might support her."

Misgivings about Merkel's refugee policy were blamed for a string of CDU state election defeats and sparked an open revolt by its Bavarian sister party, the CSU, which demanded a strict upper limit on incoming asylum seekers.

A survey Sunday showed that 33 percent of German voters backed Merkel's conservatives, down nine points from the last national election in 2013.

The AfD and the opposition Greens were neck-and-neck with 13 percent and 12 percent respectively, according to the independent opinion research institute, Emnid.

It is still unclear who will carry the SPD's banner into the race, with party leader Sigmar Gabriel potentially facing a challenge from European Parliament President Martin Schulz.

News website Spiegel Online said the CDU would have to "motivate and mobilize" supporters who might be suffering from "Merkel fatigue."

"Even though there is no Trump in sight in Germany, the US showed that the unimaginable can become real," it said.