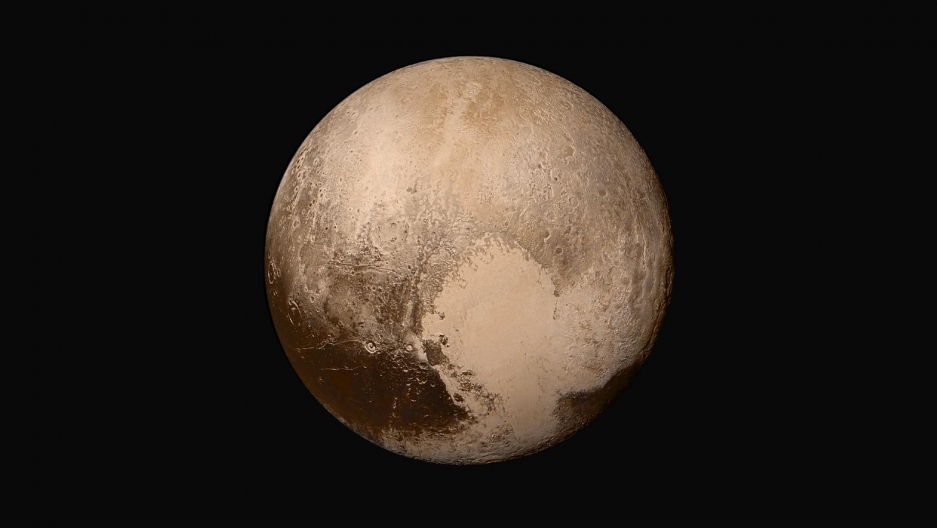 This is an image of Pluto in true color, created in 2015 using data from the New Horizons spacecraft.

In science, a picture is worth a thousand data points. And recently, our glimpses at two very different worlds got much, much clearer.

For starters, scientists at the University of California, San Diego, have developed a method for adding color to the meticulous images created by electron microscopes — which magnify specimens by millions of times, until now only in black and white. Also on the subject of amazing imagery — but on a much larger scale — researchers with NASA's New Horizons mission just finished collecting the most detailed images of Pluto ever, sent by the spacecraft across 3 billion miles of deep space.

Nick Stockton reported on both milestones for Wired. In his piece on the new electron microscope technology, he writes that until now, looking for a specific virus in a microscopic image would be like flipping through a "Where’s Waldo" book that had only black and white pictures. (Waldo would be awfully hard to find without some color to lead our eyes to him.)

The problem with color, Stockton tells Science Friday’s Ira Flatow, is that some things are just too tiny for photons, the smallest bits of light, to resolve. “[The photon] breaks down at about 0.2 micrometers, which is about 1/1,000 the breadth of a strand of hair,” Stockton says. “Beyond that, light really doesn’t work, it doesn’t diffract.”

And with no light, there are no bright hues. Stockton explains that to get an image on a molecular level, scientists have to use electrons, which are much smaller and don’t pick up the spectral information that includes color. “They only pick up shape and texture and contours,” he adds.

The regular electron imaging process involves treating specimens with heavy metals like lead. “Electrons like to bounce off of that stuff,” Stockton says. Then scientists bombard the specimens with electrons. “The resulting image is more like a shadow casting than a photograph,” Stockton writes.

To add color to electron microscopic images, scientists first create a normal, grayscale “base layer” image. Then, Stockton says, they clean the specimen and repeat the process, this time treating it with "rare earth metals" called lanthanides (which are also in lithium ion batteries). Lanthanides are “picky,” he notes, and only stick to certain types of molecules — allowing scientists to focus the new image on objects of interest. “Say they want to look at a certain peptide going through a neuronal synapse … or a type of virus,” Stockton says. “They will concoct a lanthanide that will only stick to those.”

“It helps them do detective work on the on the images they're looking at, so they can pick out, ‘OK. This is where all this virus is,’” Stockton says.

And while some scientists are busy peering at newly colored molecules, others are celebrating images of the dwarf planet, Pluto, that have taken over 15 months to appear in the metaphorical darkroom wash. On Oct. 25, the final packet of data from New Horizons’ flyby of Pluto arrived safely on Earth, for a total of 6.25 gigabytes collected.

The images, transmitted across 3 billion miles of deep space — at the achingly slow speed of 1,200 bits per second — are by far the best pictures of Pluto that we’ve ever had. But Stockton says that getting them was a chore. When he spoke with Alice Bowman, the operations manager for New Horizons, she told him it took 500 data drops to score those six-odd precious gigabytes. Each one involved about eight weeks of planning because every piece of data on New Horizons is indexed using information about when and how it was collected.

“They had to say, ‘OK, we want the piece of data that was collected at, you know, 342,265,863 seconds after New Horizons left Earth, and the probe was tilted 'x' degrees this way, 'y' degrees that way, and the Ralph imager was on or the LORRI imager was on,” Stockton says. (Ralph and LORRI are two of New Horizon’s three cameras.)

What’s more, waiting up to 15 months for any kind of image seems a Herculean test of fortitude, but Stockton adds that mission scientists weren’t even sure what the images were going to be. Their patience was rewarded.

“They just knew it was going to be aimed at what Newtonian physics told them where Pluto would be, and then they got them back, and we get these wonderful things like ice volcanoes and you know, a giant beautiful heart,” Stockton says.

Sounds well worth the wait.