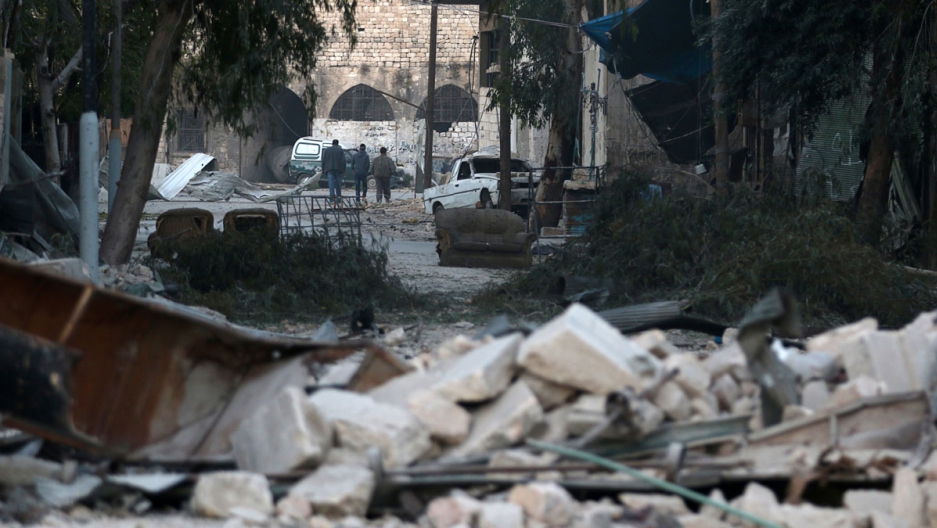 People walk near rubble of damaged buildings, in the rebel-held besieged area of Aleppo, Nov. 19.

The UN's envoy, Staffan de Mistura, met with Syria's Foreign Minister Walid Muallem in Damascus on Sunday for talks on the escalating violence in Aleppo, but was rebuffed on a truce proposal that would allow the opposition to administer the city's rebel-held east.

International concern has been growing over the fighting, after Damascus launched a ferocious assault in Aleppo last Tuesday, using air strikes, barrel bombs and artillery fire in a bid to recapture the east of the battered city.

On Sunday, rebels retaliated with a barrage of rockets into the government-held west of the city, killing at least eight children at a school in the Furqan neighborhood, Syrian state media said.

State television showed bloodied, weeping children being treated in a local hospital, and an AFP journalist saw students being rushed from the school and comforted in the aftermath of the attack.

In the east of the city, another AFP journalist said streets were deserted, with only ambulances and rescue workers moving through battered neighborhoods.

The Syrian Observatory for Human Rights, a Britain-based monitor of the war, said on Sunday that 54 people had been killed in the previous 24 hours, most of them civilians.

That brought to 103 the number of civilians killed, including 17 children, since the regime renewed its bombardment of Aleppo, it said.

The Observatory also reported heavy fighting between regime forces and rebels as the army sought to gain ground in the Bustan al-Basha and Sheikh Saeed neighborhoods of the rebel-controlled east.

More than 300,000 people have been killed in Syria since the conflict began with anti-government protests in March 2011. Successive international attempts to find a peaceful resolution to the war have failed.

De Mistura arrived in Damascus on Sunday for talks with Muallem and other Syrian officials.

Speaking afterward, Muallem said he had rejected a proposal for a truce deal that would recognize an autonomous rebel administration in east Aleppo.

De Mistura has recently floated a proposal to halt fighting in Aleppo, under which jihadist forces would leave and the government would recognize the opposition administration in the east of the city.

But Muallem said that was a non-starter.

"We told him that we reject that completely," he said. "How is it possible that the UN wants to reward terrorists?" he asked.

The regime assault has forced the closure of hospitals and schools, destroyed rescue worker facilities, and left residents cowering in their homes.

"The Syrian regime and its allies, Russia in particular, bears responsibility for the immediate and long-term consequences these actions have caused in Syria and beyond."

It says it is not involved in the current assault on Aleppo, concentrating its firepower on opposition and jihadist forces in neighboring Idlib province instead.

But Damascus and its allies have made clear they want rebels expelled from eastern Aleppo, which fell from regime control in mid-2012.

More than 250,000 people remain in the east of the city, which has been sealed off since government forces surrounded it in mid-July.

No aid has entered east Aleppo since then, and the government siege has led to food and fuel shortages, while sustained bombardment has forced schools and hospitals to close.

In mid-October, Russia said it was halting its strikes on Aleppo, and organized a series of brief ceasefires intended to encourage civilians and surrendering rebels to evacuate the east.

But few did so, and the UN said the short windows were insufficient for security guarantees for aid deliveries or evacuations.

The renewed bombing has particularly affected medical and rescue facilities in the east, with shelling on Friday destroying one of the last hospitals in rebel-held Aleppo.

Staff were also forced to evacuate the east's only children's hospital because of repeated attacks.

Among those killed in the overnight bombing Sunday were a couple and their four children who died in a barrel bomb attack in the Sakhur neighborhood, the Observatory said.

Activists circulated footage they said showed the children, in which the four siblings lay lifeless on a stone floor, among them a little girl with her hair in pigtails wearing a blue dress with a cartoon animal on it.