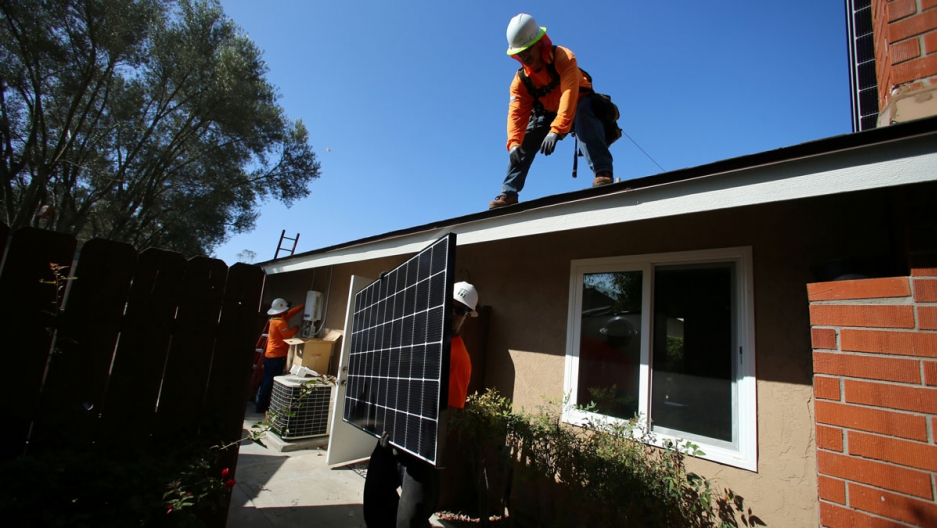 Tesla solar panels would replace the typical solar panel array, like this one being installed on home in Scripps Ranch, San Diego, California. Elon Musk wants to merge the two companies.

Elon Musk, the co-founder of Tesla motors and SpaceX, has announced a new line of attractive roofing tiles that can capture energy from the sun.

Along with a home battery, called the Power Wall, and a Tesla electric car, the new roofing tiles could form a complete personal solar power system for an individual residential home.

To achieve his vision, Musk is pushing for a merger of two companies in which he's the largest shareholder: Tesla and the home solar company, SolarCity.

“Fundamentally, the Tesla and SolarCity merger is [about] bringing together a lifetime value solution,” says Nat Kreamer, CEO of Spruce Finance and chairman of the National Solar Energy Industries Association.

The challenge Musk will find with a merger, according to Kreamer, is that, while consumers like technology bundles that give them more value — especially ones that are good-looking and easy to use, as Tesla and SolarCity have demonstrated they can deliver — do consumers want to buy all these things at the same time?

"Do you buy solar tiles and replace your roof when you choose to go solar? Will you go solar when you decide to buy a car? If you bought a car and a roof, will you then buy solar later? It's really about consumer buying behavior, and whether or not consumers will buy bundles at the same time, I think, is an open question, frankly, for the residential solar market, in general, but specifically for the Tesla-SolarCity vision," Kreamer says.

The new tiles are attractive and look just like the roofing we are all most accustomed to, which is a big advantage. “The benefit of the Tesla solar roofing is that you really can't tell the difference,” Kreamer says. “It really, I think, opens up a segment of the market to consumers who are both image-conscious — thinking about what their home looks like — but also really looking to save money with clean affordable solar power.”

In the last 10 years, prices for solar energy have dropped 70 percent, Kreamer notes. Today, solar power is the lowest-cost form of energy, globally. Additionally, Tesla, a number of startup companies and many, very large, global power and electronic manufacturers are beginning to offer better storage solutions. The most robust market for residential energy storage today is Australia, Kreamer points out, and the reason for that is twofold.

Many companies are supplying that market, and they include names like Panasonic. “I think you're going to see that it's a very competitive market for storage, globally, and that we, as US consumers, will benefit from the cost declines of that competition and see storage become economical much sooner than I think a lot of people thought," Kreamer says.