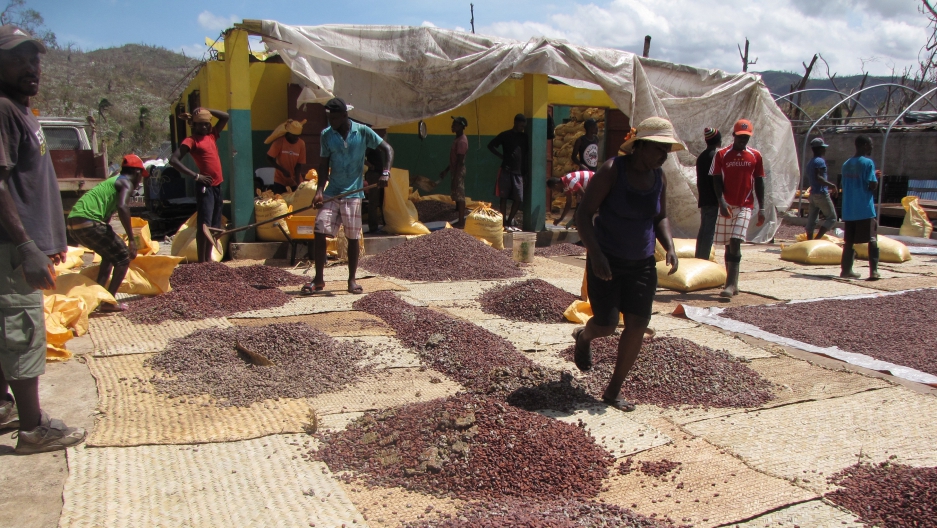 Members of the cacao co-op CAUD (Coopérative Agricol Union Développment) spread cacao beans out in the sun to dry in Dame Marie, Haiti.

If you’re into chocolate, and you’ve shopped at Whole Foods in the last couple of months, you might have seen Taza Chocolate’s stone ground Haiti bar. It hasn’t been easy, but cocoa production in Haiti has been on the rise in recent years, with more being exported.

The Haitian cacao beans Taza buys come from that country’s northeast region, which was unharmed when Hurricane Matthew passed by last month.

However, Haiti’s other big cacao-growing region was devastated.

In the fall, in Haiti’s far southwest, carpets of cacao beans can be seen along roadsides, drying in the sun. This year is no exception. They lend a splash of normalcy to the wreckage left by Hurricane Matthew.

In October, in the town of Dame Marie, I visited the processing plant for southern Haiti’s largest cocoa cooperative, known by its French acronym, CAUD. Behind a gate, men and women emptied sacs of russet cacao beans onto the ground and spread them flat. The building behind them was covered with a ragged tarp, and nearby greenhouse frames had been stripped of their covers. 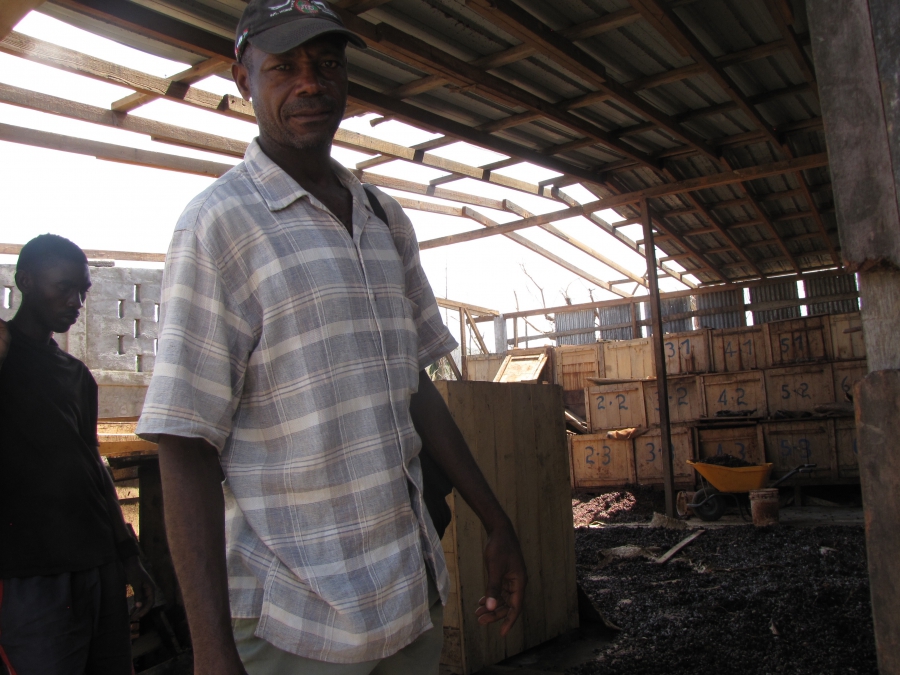 Jean Marie Francois, the vice-coordinator for CAUD (Coopérative Agricol Union Développment) stands in the coop’s storage facility, whose roof blew off in the hurricane.

Manager Jean Marie Francois told me the storage building’s roof flew off in the storm. “We had 200 to 300 60-kilo sacs of cacao that had already been dried, sorted and prepared for export,” he said. “It all got soaked. We’re trying to dry it out, and we’ll see if the quality’s been affected.”

Either way, it was the last large batch of beans the cooperative would see for a long time. Almost all of the cacao trees here were severely damaged or destroyed, with branches ripped from trunks or roots wrenched from the ground.

I drove the 10 hours here from Port-au-Prince with staff from Root Capital, an American nongovernmental organization that supports agricultural enterprises around the world, including CAUD. They told me business was booming, and that this drying and fermenting facility had just expanded. CAUD recently surpassed a thousand members and was selling to the high-end French chocolate company, Kaléos.

“CAUD was what we call a success story,” said Patrick Dessources, who heads Root Capital’s Haiti team. “They changed the community landscape just by providing a market and some kind of financing for the farmers.”

He introduced me to Paulonne Durette, the co-op’s lead purchaser, who told me that before the storm she was buying thousands of pounds a day from local growers.

“Every day it’s a pleasure for me to buy a few pounds of cacao from each person and give them some money,” she said. “We always have money to give them, and that makes me happy.”

“Cacao was our master in Dame Marie, but now ... ” Durette hesitated. “We say we’ve been abandoned, without mom or dad, because now we have nothing.”

Durette said the co-op had a ripple effect on the local economy.

Cacao is not the only devastated crop. Most others — breadfruit, yams, plantains — were also virtually wiped out. But cacao was special.

Jean Marie Francois, the manager, told me, “Cacao is the main product that makes it possible for people to send their kids to school.”

For many in this region, cacao means education. It’s a cash crop that’s harvested in time for parents to pay for tuition, books and uniforms each year.

In front of the processing plant, I met Donal Reilly. He’s with Catholic Relief Services, which also supports the co-op. He came in on a US military helicopter and had been driving around, meeting with farmers. He said things were looking grim, from air and land.

But then I found a more optimistic take. 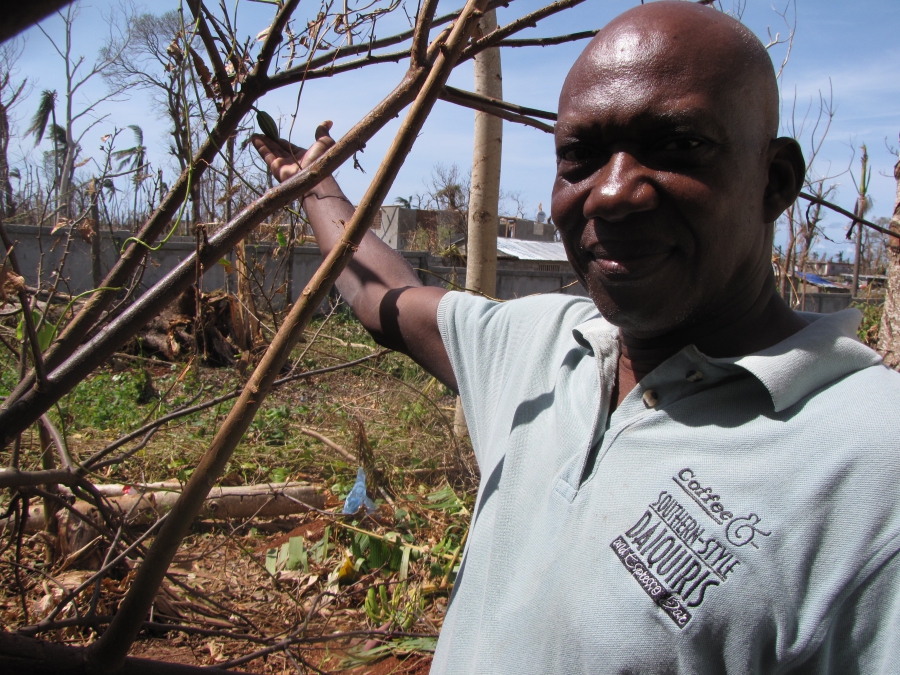 Jean Frido Forestal is the cooperative’s treasurer. His office is shrouded in a tangle of downed trees, but he seemed totally unfazed.

“It’s true a lot of trees were destroyed,” Forestal conceded, “but those just broken can bud again, after it rains. If you graft a tree, it can bud and make shade for the garden.”

Forestal insisted it won’t take four years for cocoa production to get back on track. He remembered how quickly trees rebounded after Hurricane Allen in 1980.

“I think we can use this bad luck and take the opportunity to make improvements,” he said, “because this is an ideal moment, a propitious moment.”

Let’s hope he’s right — not just for the sake of the local economy, but for the environment, too. Cacao trees love the shade of other trees, so investing in cacao means investing in diverse forests. That’s something deforested Haiti needed before Hurricane Matthew struck last month, and something it desperately needs today.

A previous version of this story misspelled Donal Reilly's name and the name of the French chocolate company Kaléos. 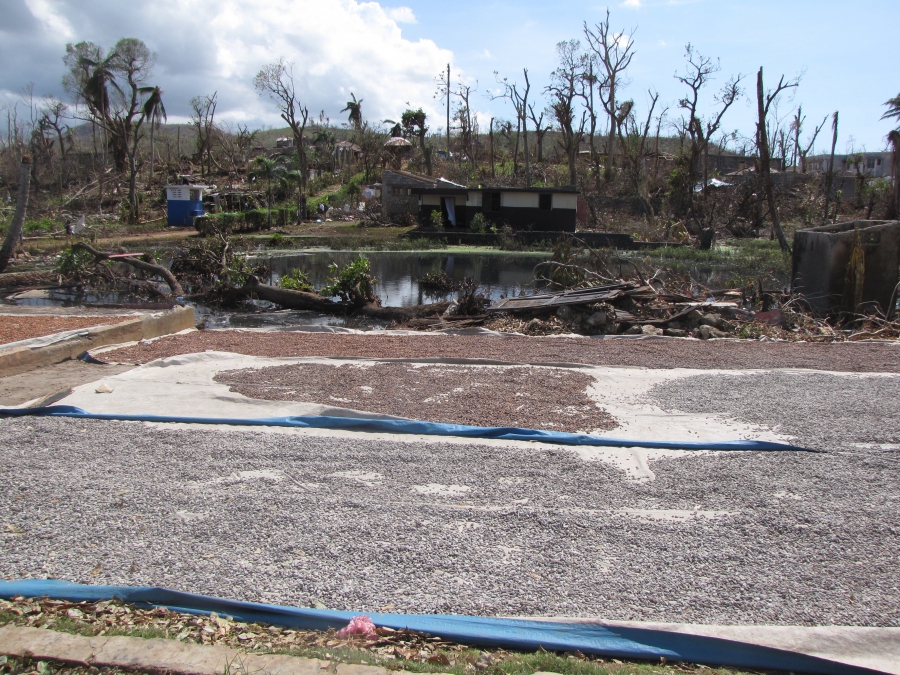 Cacao beans dry in the sun next to the road outside Dame Marie.