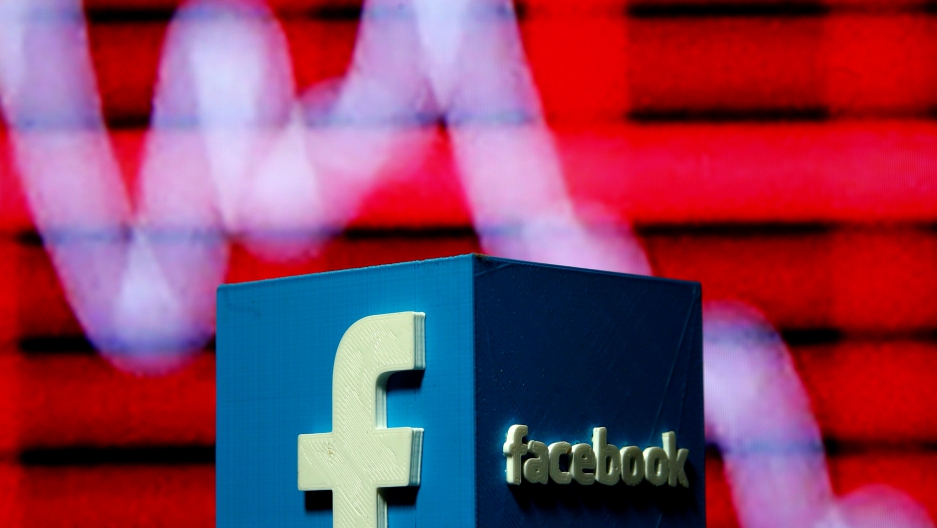 A 3-D printed Facebook logo is seen in front of a displayed stock graph in this illustration taken on Nov. 3, 2016.

I've been spending more time than I'd like at the dentist lately. The mortgage on an accident in a sixth-grade swim practice has come due, and some of those damaged teeth need work.

As a Washington journalist, people jump at the chance to yak about politics with me. And like many dentists, my friendly "Dr. Brown" (not his real name) loves to chat. Dr. Brown is a news junkie, and when I'm in his office, he starts the debate right up. I'm always prepared for an indictment of the mainstream media, very affably delivered.

None of that is unusual, and it's not onerous, as far as I'm concerned. But as the presidential campaign drew more intense, I started to detect a shift in Dr. Brown's chosen topics. What had once been legitimate gripes about Obamacare or Israeli policy had changed. Dr. Brown was increasingly concerned about the criminals in our very midst.

As I sat in his chair a few weeks ago, awaiting an X-ray, Dr. Brown brought up Hillary Clinton's emails, and how the FBI had failed to recommend an indictment. This was definitely an issue in the campaign. Dr. Brown thought he knew why the FBI and its overseers at the Department of Justice had failed to act.

"Loretta Lynch," he said. "The attorney general is in trouble herself. She can't afford to stick her neck out on this."

"Well, she took the Fifth Amendment for paying off a ransom to Iran in the nuclear deal. The whole thing was illegal. Too much coming down on her."

Huh? Had I missed something? Had Lynch ever faced questions that would even lead her to invoke her right against self-incrimination?

"I'm sure that's not right, doc," I said. "You know what the Fifth Amendment is for. It's to protect you from implicating yourself in a crime. I'm pretty sure that never happened." Dr. Brown insisted that the Iran nuclear deal was so crooked, and the $150 billion paid to Iran was so corrupt, that Lynch had to protect herself from jail.

I took out my phone and Googled. It took about 12 seconds to find out the truth. For starters, I told him, while lots of Republicans called the $150 billion "ransom," those were, in fact, frozen Iranian assets that were freed up under the terms of the deal. That's just spin. But far more important, Lynch had never invoked the Fifth Amendment or even come close. What she did do was tell opposition lawmakers that she was through answering what she viewed as hectoring questions about a part of the deal they opposed.

When GOP Rep. Mike Pompeo received that news, he quipped that the attorney general had, essentially, "taken the Fifth."

I held up my phone and showed Dr. Brown an article explaining the truth, along with a few others. Together they showed how a congressman's quip had morphed into a false conspiracy theory. "See," I said. "That's false. It never happened."

But Dr. Brown immediately shifted the conversation to another scandal: Clinton needed heavy doses of stimulants to function on the campaign trail during the day.

"Doc," I said. "What do you read?" He told me he spends his copious news time with Fox News, but also lots of time on NewsMax, InfoWars, Facebook and other websites.

This study on the power of fake news in the election was still weeks away. Most of us didn't realize the impact of false news stories on readers. But it dawned on me right in Dr. Brown's chair. This an account of the conversation that followed:

Me: Doc, I want you to know I respect your choices, and I don't care what your political views are. But I'm worried about what you're reading as news.

DB: Absolutely, I do.

Me: Well, suppose you looked in my mouth, and it was riddled with decay. And before you could intervene, I said, "Eh. You mainstream dentists have your own biased point of view, but you don't really know what you're talking about. I read on the internet that the best thing I can do is gargle with Coca-Cola twice a day. So that's my program!" You'd be horrified, right? You'd think I was dangerously misinformed.

Me: Doc, I'm a professional journalist. I worked hard to get where I am in my career. I care about the truth, my credibility depends on me getting it right for my listeners, and I take it seriously. Most important, I believe with all my being that truth and accountability are critical to the health of our democracy and our country. Do you believe that I take my profession as seriously as you take yours?

Me: Doc, I need to level with you. The news you're reading, the stories you're telling me. This isn't about point of view. They're false. Doc, you're gargling with Coke. And it's bad for you.

DB: Well, I understand what you're saying, but people really don't know the truth about ...

Me: Doc, I'm not sure you're hearing me. I'm not criticizing your politics. I'm letting you know, as a guy who spends his career on this. That story about Loretta Lynch's Fifth Amendment plea. It's false. Hillary's uppers. There's no evidence for any of it. Doc, this is my professional advice. What you're reading isn't helping you. You're gargling soda.

At this point, Dr. Brown chuckled to break the tension. He assured me that, in fact, he consumes news from across the spectrum, on cable, in the papers, even public radio!

"But you know what my real concern is Todd," he said.

Dr. Brown then told me the shocking truth about how Clinton's aide, Huma Abedin, shows all the signs of being an al-Qaeda terrorist mole, embedded right in the heart of a presidential campaign. And he told me the horrifying details as he — very deftly and with great professional care — fixed my teeth.

Dr. Brown is an unscientific case of just one man, one voter. But my chat with him stunned me. And it should caution against the tempting belief that fake news is a hazard to the uneducated, or the politically causal, or the inherently credulous. Dr. Brown went to top-notch schools, practices in a wealthy section of Washington and makes plenty of money. He is not a "white without a college degree" that helped turn the tide in the election. Meanwhile, Donald Trump, soon to be president of the United States, is bringing to the White House his strategy of attacking and poisoning professional journalism that (mostly accurately) reports on his flaws as well as his successes.

The sugary-sweet false news Dr. Brown swishes with daily is causing decay. I can't say how much, but I can say it isn't healthy. That sugar-water is free, delicious and addictive. And, as hard as I tried, sitting in his chair, there was no rot I could point to that Dr. Brown was willing to see.