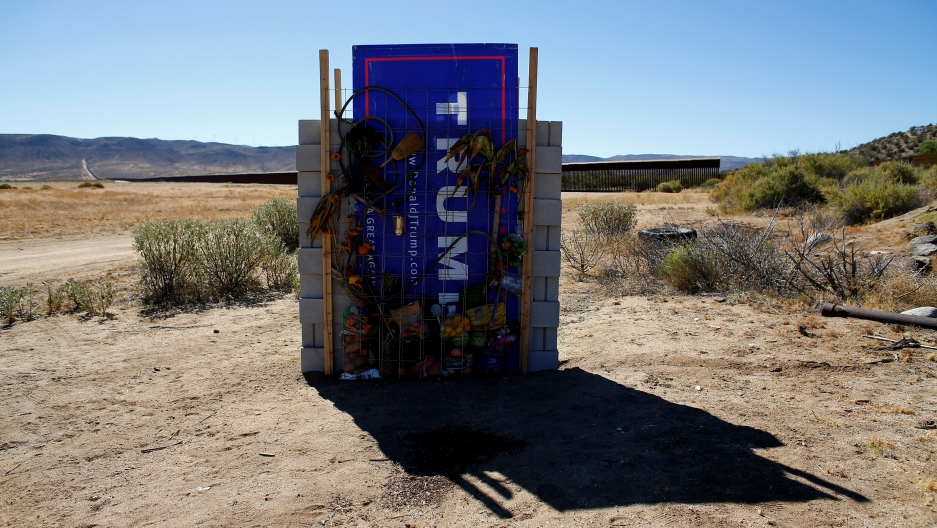 A version of President-elect Donald Trump's wall, created by artists David Gleeson and Mary Mihelic, is pictured next to the US-Mexico border in Jacumba Hot Springs, California, on July 12, 2016.

President-elect Donald Trump has made many promises — and a few threats.

Often, the latter are directed at Mexico.

For example, he's promised that Mexico will pay for the border wall he says must be built. His idea to do that is to stop people in the US from sending money back to their families in Mexico. The wire transfers known as "remittances." They are a big deal for the Mexican economy. Some $24 billion flow into the country through remittances.

Like many of Trump's plans, though, he's not provided a lot of public details.

But last April, Trump’s campaign said he would broaden a provision of the Patriot Act to make it more difficult for undocumented immigrants to wire money.

“The plan outlined on Trump’s campaign website invokes Section 326 of the Patriot Act, which presses financial institutions to verify the identity of customers who seek to open accounts,” Miriam Valverde wrote for PolitiFact last summer. “Trump says he would introduce a 'proposed rule' to include money transfer companies in the definition of financial institutions. He would also redefine "account" to include wire transfers. The desired result: No immigrant would be able to send money outside the United States unless they show documentation proving their legal status.”

Can Trump do this?

“The contention by the Trump campaign has been that this is a regulatory modification to the underlying law, and therefore it doesn’t require going back to Congress,” says Michelle Mittelstadt of the Migration Policy Institute, a nonpartisan research group based in Washington DC. “But shutting off the majority of this flow would undoubtedly cause some very significant efforts to turn this back.”

The political reaction in Mexico has spanned from mild to fierce. Fernando Belaunzaran, a politician for the left-leaning Party of the Democratic Revolution, tweeted: "Trump's victory is the antithesis of the fall of the Berlin Wall."

If remittances do become tougher or costlier to send, any decrease in the amount sent home will hit Mexico's poorest hardest. Remittances are often a lifeline, making it possible for families to buy everything from school supplies to food. It could also mean the money goes underground. “You know, people are going to find a way to send money to their families,” says Monica Campbell, an editor for PRI's The World in Mexico City.

Campbell adds that if the plan does go through, people will be angry. “I’d hate to see what happens if you cut off that money,” she says. “But what could happen is you’ll have people decide to go north. So this could backfire greatly. If Trump thinks that cutting off remittances is going to stem the number of Mexicans going north — that could absolutely be the reverse.”