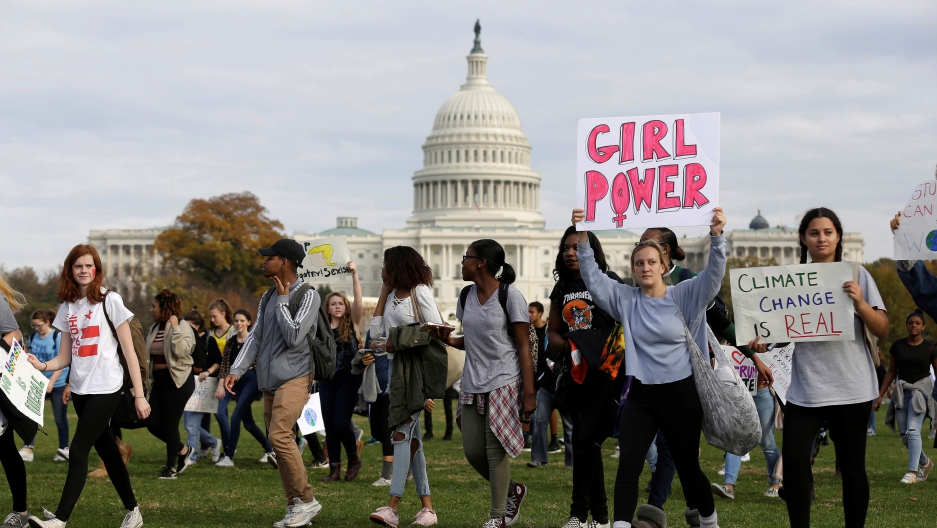 Students gather in Washington DC to protest the election of Donald Trump.

In the midst of the Civil War, President Abraham Lincoln made Thanksgiving an official holiday, hoping that the day would help to “heal the wounds of the nation.”

Now 153 years later, after one of the most divisive elections in history, we probably need this day more than ever.

However, some millennials, particularly the more liberal ones, are choosing to opt out of the festivities this year — their wounds too fresh. Their fears about the consequences of a Trump presidency, as well as a general disdain for family members who voted for him, are still very real.

Christina Heiser, 28, is a New Yorker who only lives a few miles from her parents in Queens. This year she’s skipping Thanksgiving with them to avoid what she considers to be inevitable, and painful arguments.

“After this election, I decided I couldn't go home to my parents’ house on Thanksgiving,” said Heiser. “As a woman (and as someone who has close friends who are LGBT, minorities, etc), I'm too upset about the outcome of the election to be around my dad, who is a huge Trump supporter.”

Like many millennials, 63 percent of whom did not vote for Donald Trump, Heiser is concerned that people in her father’s generation are too quick to look past the racist and sexist rhetoric spouted by their president-elect, and don’t stop to consider the real impact his words have on women and minorities.

“[My dad] says the reason he voted for Trump was because Trump is an ‘outsider’ and will ‘get rid of the corruption in Washington.’ He also believes Hillary is a ‘criminal,’ — but he forgets some of the things Trump really stands for.”

Ben Breier, 30, is another millennial who won’t be returning home this Thanksgiving or Christmas. In lieu of gifts or a plane ticket home to see his conservative family members, he’s made donations in their names to Planned Parenthood.

“I actually don't know how to tell them that I'm not coming home. So I haven't yet,” said Breier. “I spoke to my cousin, who is gay and in Los Angeles, and he's also trying to figure out what to do in the wake of this. Our extended family is incredibly politically divided.”

Being politically divided is nothing new for American families, and these divisions are often compounded by age, demographics, and what happens when young people start making decisions on their own. However, this year these rifts seem to be particularly intense because this election cycle made us all hyperaware of the deep-seeded racism and misogyny in this country.

“My boyfriend (who was a big Hillary supporter like me) said he would purposefully pick a fight with my dad over the election the next time he sees him, so I decided it'd be best for all of us to not to be together on the holiday,” says Heiser.

READ MORE: This turbulent election has millennials seeking support from each other

However, not all millennials want to avoid these confrontations — in fact, many embrace the dialogue. In The UnConvention Facebook group, which has been an ongoing collaboration between PRI.org, 92Y, and Mic, many people scoffed at the idea of skipping the holiday because of disparate voting records.

“I'll be at Thanksgiving because my family is small,” wrote Katherine Speller, 24.  “And, like I've been doing over the last few days, I'll be pushing conversations about the white nationalists, climate deniers and evolution deniers being appointed to cabinet positions; I'll be encouraging constant awareness of the various hate crimes inspired by our president-elect's rhetoric and will be reminding them that their queer daughter/granddaughter/niece who loves them is still here and not shutting up. I expect that people who voted Trump be willing to stand and be counted for what they believe.”

“If any of my family does support Trump, I don't plan to berate them for it, or write them out of my will,” wrote Charlotte Cohn, 22. “I already decided that I wasn't going to act angry or condescending towards Trump's supporters any more. Instead, I'd like to talk to them on a person-to-person level, to understand why they voted the way they did. Only through engagement and civil discourse can we confront the problems of bias, discrimination, and white nationalism in America.”

While some millennials will be avoiding the tensions, and others embracing it, there is, of course, a third option: surprise. Kelly Helfrich, 30, said she never goes home to Arkansas for the holidays, but she did hear a story recently that made her feel a bit better.

“My conservative grandpa led a dinner prayer that ended with, ‘I hope Donald Trump finds God because he is clearly is not a Christian. God save us all.’”