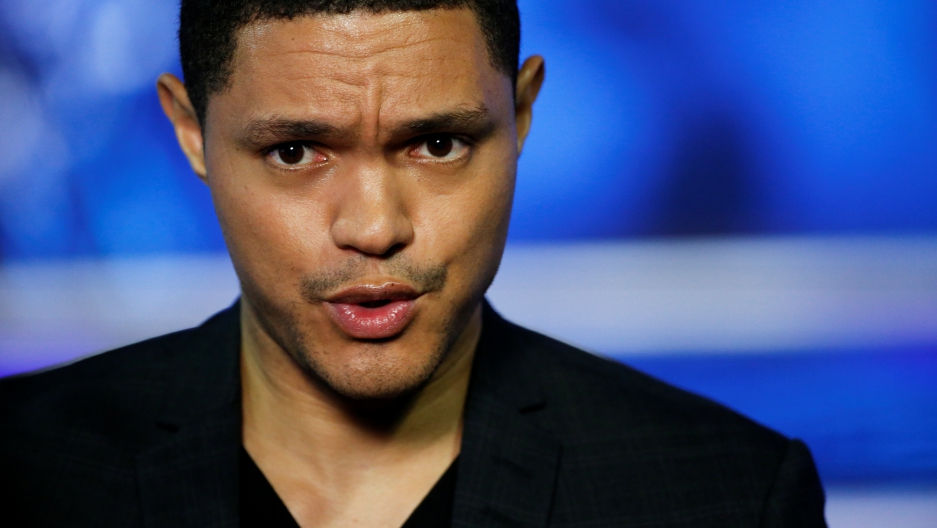 The host of The Daily Show Trevor Noah's new memoir is called Born A Crime: Stories from a South African Childhood.

Comedian Trevor Noah can't recall the moment himself. But he says the scene in the Johannesburg delivery room when he was born was more than a bit uncomfortable.

"I came out and there was just an akward pause," recounts the host of The Daily Show. "All of these doctors are standing around, and there is this black woman and she has just given birth to a child that does not look black at all. And everyone's looking around basically for the culprit in the room."

'Trevor Noah still doesn't get it'

Weeks after interviewing Noah, The World's host Marco Werman spoke with BuzzFeed reporter Tomi Obaro about her essay on Noah's failure to speak for the black experience in America.

This was 1984 apartheid-era South Africa. Noah's mother was black, his father white. And since miscegenation laws criminalized sexual relations between races, the birth of a biracial child broke the law.

Noah's illegal start is just one of many stories about race and identity he recounts in his new memoir "Born a Crime: Stories from a South African Childhood."

In the book, as he grows older, he concludes that "racism exists, and you have to pick a side. You can say that you don't pick sides, but eventually life will force you to pick a side."

Asked by The World to unpack that sentiment, Noah took pains to explain that "taking sides" for him is not a battle cry.

"In the face of misogyny, or the face of racism you are reminded of the side that you are on, whether you chose it willingly or not," he says. "As much as we are humans, a lot of women in this [US] election had to go 'No, I'm a woman, and this is what I'm choosing and this is the side that I'm coming down on.'"

Noah says he learned quickly as a biracial child that he would rarely experience the advantages of South African whites. Still, some members of his family offered him special privileges because of his father's racial classification.

"According to the law, I was a person who was superior to half of my family because they were black and I was half white," he recalls. "In my mind I assumed they were treating me like that because I was like a really cute kid. As a kid you don't ever think to yourself that anything positive you're experiencing is because of a political bias that's been put in place."

When Noah met with his Swiss-German father as a boy, the two stayed indoors to avoid public scrutiny.

"Being with my father in public was pretty much exposing the crime that you have committed as a family," he says. "That's the equivalent of doing a line of coke on the sidewalk."

Noah's Xhosa grandmother was especially worried that officials would discover her grandson's background and place him in an orphanage or with biracial parents.

During his adolescence, Noah and his father grew apart. But years later, after the comedian's career took off, he tracked down his father with the help of the Swiss Embassy.

His father had been following his stand-up appearances, and had kept scrapbooks of his son's achievements. That gave Noah a profound sense of belonging.

"When we are chosen by our parents that becomes the foundation of how we see ourselves in the world," he says. "That was a surreal and beautiful moment for me."