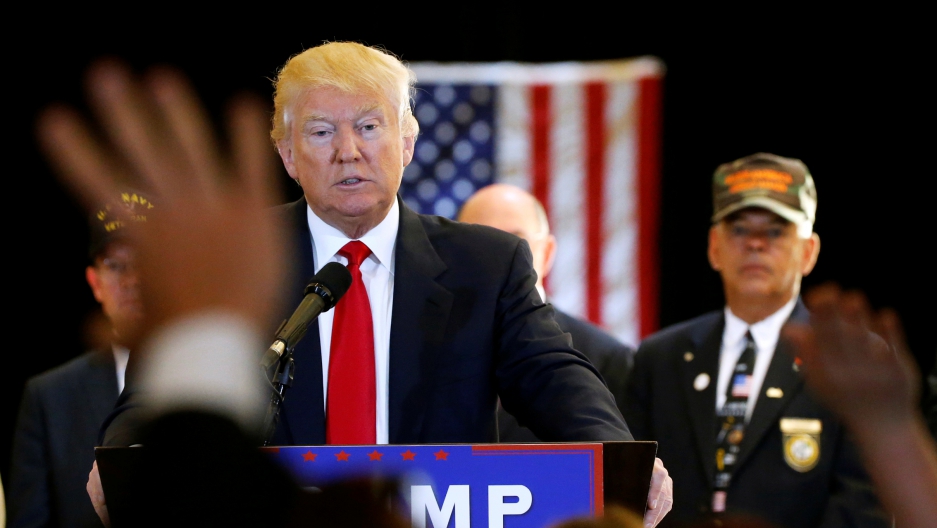 Donald Trump addresses the media regarding donations to veterans foundations at Trump Tower in Manhattan, May 31, 2016

Veterans Day 2016 came the same week as a significant and divisive election. Veterans, like other groups of Americans, were divided in their voting.

We reached out to more than a thousand vets. Many offered strong opinions.

Others wanted to make sure the new president does something about health care for veterans. Phil Moyart of San Jose, California, wrote, "Make America great again, reform the health-care delivery services of the Veterans Administration."

There were also notes of concern.

Brian McGough is a combat-wounded veteran who served in the initial invasions of Afghanistan and Iraq.

"I did not see the election going the way it did," he says. "It kind of makes me a little upset about how my views of America are different than the views of America that are coming out right now."

McGough, who has fought for the right of women to serve in combat, worries that President-elect Trump's views might result in limiting opportunities for women in the military.

"It's important to remember that there are a lot of veterans out there who are now feeling like they don't belong in this country," McGough adds. "There are veterans of color, veterans of different religious preferences, gay, lesbian, bisexual, transgender veterans who now feel threatened in their own country. And for me that's very concerning."

Afrita Davis is a sergeant in the Army reserve. She is a black woman, and says Veterans Day can be difficult for her.

"I've been serving for almost 14 years and I've had one tour of service in Iraq," says Davis. "I'm always feeling marginalized, because 'your' veteran — the person that you know who served — doesn't look like me. And so there's always this fight to be seen and to be recognized on Veterans Day, for me, personally."

But this year, the day is particularly hard for Sgt. Davis.

"For this election to compound, you know, a candidate who has been so divisive against communities of color, I really don't have a whole lot of words," she says. "It's just really difficult to be in this fight and being recognized as a veteran only to be further marginalized and set aside as a black person."

Afrita Davis is not alone in her concern about marginalization under the next commander-in-chief.

Another vet, who wrote to us from Ellwood City, Penn., expresses bitterness.

"I'm a veteran with mental health issues, and we just elected a man that thinks I need to just toughen up. ... I wish I was born with a silver spoon in my mouth. I'm neither proud of my country nor my service today. I just want to wake up from this nightmare."

But Dean Castaldo, an eight-year military veteran, points out that the men and women in the armed services — more than a million — represent a cross-section of America.

And regardless of their differences, Castaldo says, they all work together as a team.

"I think the American population can learn from that, and take that on board," he says, "and everyone should, metaphorically speaking, raise their right hand and pledge to be part of something bigger themselves, and say, 'I'm an American first, and let's just all come together and work as a team and continue to do great things.'"

Castaldo says being optimistic is essential in a time of uncertainty.

"If you look throughout our history, we've endured much more difficult times," he observes. "We've gone through civil wars, and world wars and great depressions that the current population — we couldn't ever even imagine. And yet, here we are. You know, we'll be OK."