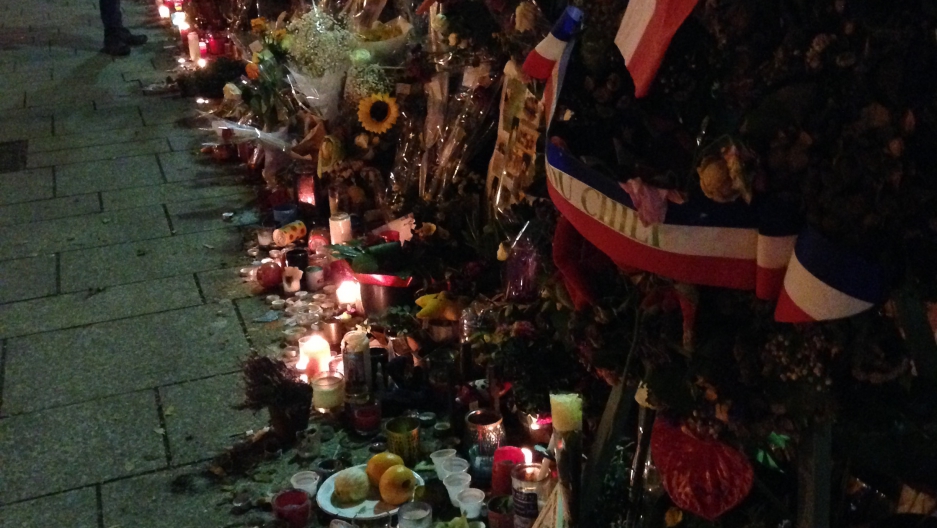 This is a snapshot of the scene outside the Bataclan in December 2015.

Almost immediately after the coordinated terror attacks in Paris that killed 130 people — this Sunday marks the one-year anniversary — ad-hoc memorials appeared in and around the city. At the sites of the violence, Parisians, and other mourners from all over the globe, left behind bouquets, photos and personal notes addressed to the victims, along with messages of solidarity with France.

The memorials were attended to, and they continued to evolve throughout the winter and into the spring.

Now, the city is working to hang on to the myriad heartfelt mementos and to share them virtually. Earlier on, the City of Paris Archive was hesitant about disrupting the collective grieving. However, when it became clear that the elements were taking a toll on things, the city decided to intervene. Teams returned to the sites again and again to collect the items that have now become a permanent part of the archive's collections.

The remembrances came in many different forms, and people used whatever they had. “We were a little astonished to find messages written on metro tickets, on business cards, on hamburger wrappings and on postcards,” said archivist Audrey Ceselly. “We felt that there was a sense of urgency. You are there, you leave a note.”

She and other archivists similarly felt an urgency to their work, sorting through everything, trying to salvage items that had already begun to deteriorate.

This was the first time Ceselly had collected documents off the street. She and her colleagues made more than a dozen visits to the memorial sites, carrying away the last of the items from the Place de la Republique in August.

Selections from the archives

Back at the archive, they spread the documents out to dry, then had them disinfected to kill paper-destroying microbes and they cataloged every object.

“We rarely work with contemporary documents, about events that we are still 'living,'” said Ceselly.

It was emotionally difficult, and Mathilde Pintault, Ceselly's colleague, said she tried to stay focused on the effort at hand.

“We wore two hats,” Pintault explained, “of Parisians but also archivists who already do this work. I wanted to participate in this collection effort as a professional but also because I was convinced that it was fundamentally important for the history of Paris, as a citizen.”

While the Archive will keep all of the paper items — including books and some large banners — a selection of objects, like a painted guitar at the Bataclan, went to the Carnavalet Museum of Paris history.

The Archives’ items have all been scanned, and now workers are sifting through the images to see what can be shared online. Because of privacy concerns, some of the most poignant items left at the scene, like photographs of the victims, will be left out of the internet archive.

But here are a few of the messages:

"At the concert, on the terrace, in the stadium. Thinking about you a lot. We love you very much."

Memorials at the site of one of the attacks, December 2015

A previous version of this story incorrectly spelled the names of Audrey Ceselly and Mathilde Pintault.