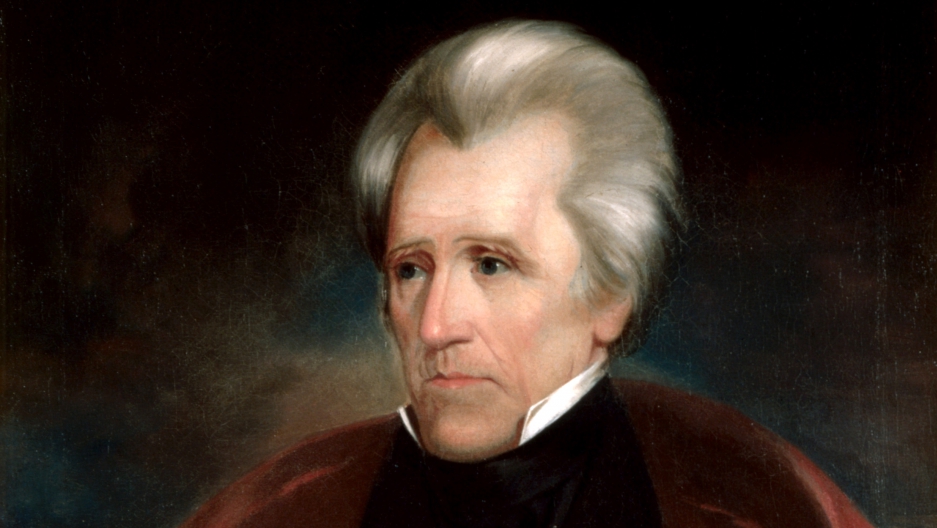 Portrait of Andrew Jackson, the seventh president of the United States by Ralph E. W. Earl

A lot of people have been saying the triumph of a man like Donald Trump is unprecedented in American history. But then you have to remember Andrew Jackson.

"This is like Andrew Jackson's victory. This is the people beating the establishment. And that's how he [Donald Trump] posited right from the beginning, the people are rising up against a government they find to be dysfunctional. And yes, it's a defeat for the Democrats, but this is a defeat for some Republicans too," he told MSNBC.

Old Hickory. The hero of the Battle of New Orleans. The champion of the common man. Bloody Bloody Andrew Jackson, seventh President of the United States, from 1829 to 1837. Father of both the Democratic Party and, arguably, the father of modern politics.

Let's start with the hair. We all know Jackson’s face from the $20 bill. But take a look at that big unruly shock of hair. It was red (at least till he got old).

Despite his own great wealth, he championed the grievances of “the little man,” the ordinary farmer and mechanic, against what he called “the aristocracy of the few” — the established political elite of the east coast cities.

This elite was personified for Jackson by his rival, John Quincy Adams, a cosmopolitan diplomat and, as the son of President John Adams, a member of a political dynasty.

Jackson shocked and overthrew establishment politics after coming to power in 1828.

It was in part revenge for the election of 1824, when Jackson was, in his mind, cheated out of the presidency. He had won the most votes in the electoral college. But the elites saw him as a vulgar outsider, and denounced him as being of dubious moral character, unfit to govern. Adams colluded with Speaker of the House Henry Clay to put himself in the White House. Clay in turn became Secretary of State. Jackson saw that as “a corrupt bargain.”

Jackson was also the victim of the first deliberate smear campaign, in the 1828 election. Yes, he technically had been a bigamist, but it was unintentional. Yes, he had butchered his enemies on the battlefield, but there was no evidence to support his opponents’ claims that he did unnatural things to the bodies of his enemies, or cannibalized them. Jackson’s wife died just before his inauguration, and he blamed the death on the shock she suffered from the personal insults made by his political enemies.

But what made Jackson controversial in the eyes of the elites?

Well, despite his origins as a lawyer, Jackson appeared to many as having little regard for institutions, the law or even international treaties. His kind of law was the rough-hewn frontier type.

For example, as a militia colonel he took it on himself to invade and annex Spanish Florida. Without higher authority, he imposed martial law, as he had earlier in New Orleans during the war with the British. There wasn’t a real need for it, but martial law allowed him to arrest and occasionally execute his enemies.

He was ruthless. The manner in which he killed a rival in a duel in 1806 was considered highly ungentlemanly, and led to him being shunned by much of polite society.

He was bitter and held on to a grudge. He blamed the British for the death of his mother and brothers in the Revolutionary War, and harbored hatred for the Brits throughout his life.

But, oddly enough, little fuss was made by contemporaries about the way he'd made his fortune, speculating in Native American lands that were not his to buy and sell. No-one complained about conflict of interest when he helped negotiate “treaties” with these peoples, which helped make his nominal title to the land a fact on the ground.

With land acquired in this way from the Chickasaw nation, he co-founded the city of Memphis in 1819.

Like many southerners, he became a plantation owner, acquiring slaves and growing cotton. He has been described as “humane” compared to his peers, providing clothing and shelter for his slaves. But he also had them whipped “to improve productivity.”

Jackson was also a merchant and slave-trader. That meant purchasing slaves in the populated states of the east, like Virginia, then marching them away from their families to the auction blocks in the new territories opening up in the west. This imagery — of slaves marching in coffles (chained at the neck and sometimes at the feet), ill-dressed or naked, over the Appalachians — was used against him by northerners in the election campaign of 1828. It’s doubtful he participated in these marches himself, but as a merchant he benefitted from the process.

He was, for sure, a man who could get things done, with little apparent regard for the law.

There are plenty of differences between Trump and Jackson. Jackson was very much a self-made man. He had been a poor orphan.

Then there’s the courage he displayed on the field of battle, fighting for the US against the British, the Spanish and various Native American peoples. He got the nickname “Old Hickory” from repeatedly exposing himself to enemy fire, to encourage his men, and never getting hit.

He did get shot while duelling and brawling. But not while in combat.

Reviews of Jackson’s performance as president depend on whose history you read. He was semi-deified by the Democratic party later in the 19th century. They adopted the donkey as their symbol, in mock tribute to an insult used by their enemies on the stump: “Jackass” Jackson.

He definitely shook up the political establishment. But some argue this opened the door to a new era of cronyism. He was highly responsive to public opinion.

And he was definitely seen as someone you did not bluff, as he was always seen as being capable of pulling the trigger. In this way, he was able to preserve the union when South Carolina threatened to secede over the issue of tariff reform. Jackson sympathized with their issue but violently opposed their threat to break-up the union. He began the processing of raising an army, and the South Carolinians backed down.

Jackson did take on big business and even shut down the American central bank, the Second Bank of the United States. But that led to a boom based on easy credit and inevitably to a catastrophic crash — the worst the nation had seen up to that point, with a deep depression for four years. Jackson was directly responsible for the crash but his successor, Martin van Buren, got the blame.

The much bigger blot on Jackson’s record was his initiation of the policy called at the time “Indian Removal.” In the interests of national security, Washington decided all Native Americans should be moved west of the Mississippi. Thousands died in what the Cherokee people remember as the ‘Trail of Tears.”

Given Jackson’s interest in trading in land, this action has been seen by some historians as having more to do with real estate speculation than national security, or the even more specious argument that removal was necessary to help the Native Americans survive. Some historians and activists call it an act of genocide.

The 19th century political writer, Alexis de Tocqueville, met Jackson and was not impressed. He believed he was trading on the reputation gained on the battlefield 20 years before, and was not bringing much to the table. He particularly criticized Jackson’s frequent disregard for laws and institutions.

Incidentally, Jackson was also the first president to be the target of an attempted assassination. The would-be assassin was an unemployed immigrant house-painter, who blamed Jackson for the loss of his job.

None of this obviously pre-figures anything today. One can't possibly tell the future, or predict what kind of president Donald Trump will be. The only real comparison is to say that Donald Trump actually fits into an established American tradition of charismatic, populist, anti-establishment proto-demagogues, who periodically come along, shake things up, but don't necessarily leave the world a better place

Categories:
PoliticsGlobal PoliticsThe World That Was