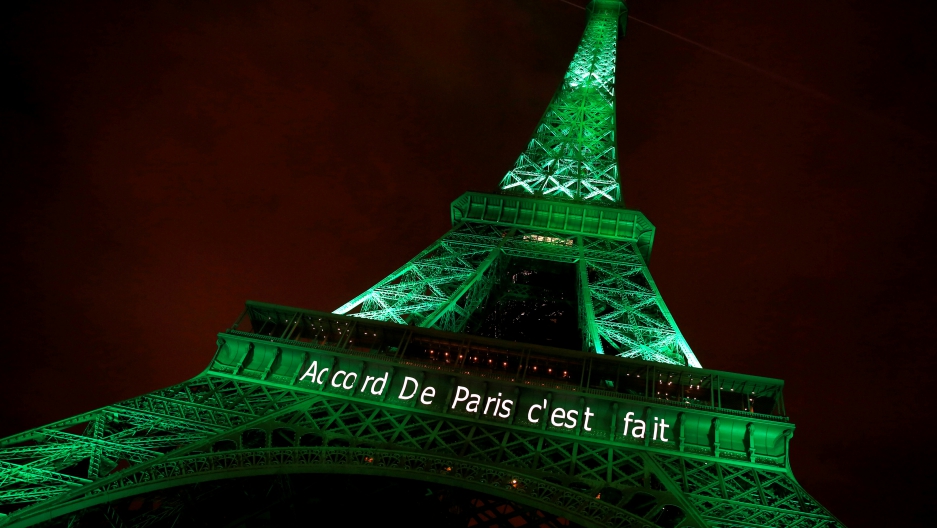 The Eiffel tower is illuminated in green with the words "Paris Agreement is Done", to celebrate the Paris U.N. COP21 Climate Change agreement in Paris, France, November 4, 2016.

The United States will likely fail to meet its pledges under the landmark Paris climate pact to reduce greenhouse gas emissions, analysts said Thursday on the margin of UN climate talks.

Even if president-elect Donald Trump does not reverse policies already put in place by Barack Obama — and that is a big 'if' — US emissions of heat-trapping gases would remain stable over the next 15 years, badly missing the target, the experts said in a report.

"With no additional policies, emissions in the US will be flat until 2030," said Niklas Hohne, director of the NewClimate Institute in Cologne, Germany and co-author of the analysis.

Under the Paris Agreement, which went into force last week, the United States committed to slash its carbon pollution by 26-28 percent, as measured against a 2005 benchmark.

If Trump carries out threats to unwind the Obama administration's Clean Power Plan, these emissions could be even higher, Hohne said.

Democratic candidate Hillary Clinton vowed to continue Obama's policies, and would have had at least a chance of meeting the Paris goals through executive action, experts say.

It is highly uncertain whether Obama's long-term objective of slashing economy-wide emission 80 percent by mid-century will be maintained by the new administration.

Trump has described global warming as a "hoax" perpetrated by the Chinese government, and has said at different times that he would "renegotiate" or "cancel" the 196-nation deal.

The country-by-country analysis of the world's biggest CO2 emitters, updated from last year, found that average global temperatures would rise by 5.0 degress fahrenheit f all nations fully carry out their emissions reduction pledges.

With no change from current policies, the global thermometer would rise about 6.5F by century's end, a recipe for climate catastrophe, scientists say.

Already with barely 1.8F of warming, the world has seen an uptick in deadly storms, droughts, heatwaves and flooding caused by unusually heavy rains.

Leadership role up for grabs

Nations must seriously boost efforts to accelerate the shift away from fossil fuels if the Paris pact's goal of holding global warming to below 3.6F are to be met, said Bill Hare, CEO of Climate Analytics, who also co-authored the report.

"Not much change has happened in the level of ambition being put forward by countries" since the deal was inked in the French capital last December, he said.

But developments in China and India are "encouraging," he added, with both countries moving away from carbon-intensive coal to renewables.

"With the election of Donald Trump, the position of global leader on climate is open," said Hohne.

China, he added, could well fill that slot.

A research note from HSBC released Wednesday made much the same point: "The result puts the US leadership in the global climate policy arena in doubt."

But other experts said the US transition away from fossil fuels is too far advanced to reverse.

"Trump's victory will take the Federal government out of the game," said Alden Meyer, a veteran climate expert at the Union of Concerned Scientists.

"But it won't stop the trend towards the clean energy economy."

Tax credits in the US for wind and solar energy installation were recently extended for five years.

Both sectors are booming. Nearly 30 percent of all new capacity added to the US electricity grid in 2015 was solar.