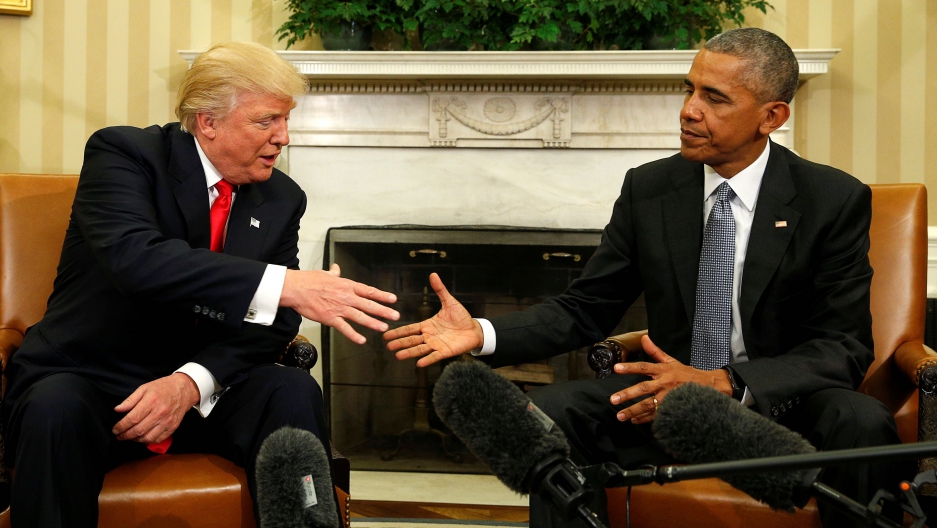 President Barack Obama meets with President-elect Donald Trump in the Oval Office at the White House in Washington DC on Nov. 10, 2016.

As a political outsider who campaigned with venomous disdain for Washington’s national security establishment, Donald Trump appears likely to overhaul the nation’s military leadership, displace many of its top civilian advisers and provoke turmoil inside the intelligence community.

If he keeps his campaign promises and secures the support of Republican lawmakers who will retain a majority next year in both houses on Capitol Hill, Trump will engineer a substantial increase in the defense budget to build more ships and planes and enlarge the Army and the Marine Corps, fulfilling a long-held dream by those services and the contractors that support them.

He’s also said he wants to double down on the Obama administration’s multibillion-dollar investment in weapons systems designed to defend against attacking missiles, though these systems haven’t worked well in tests to date. And he’ll accelerate America’s production of nuclear warheads, as well as the bombers, submarines and ballistic missiles that carry them, despite worries among budget hawks that these agenda items are unaffordable in light of other pressing defense needs.

Trump has promised vaguely that he will pay for new military spending by “conducting a full audit of the Pentagon, eliminating incorrect payments, reducing duplicative bureaucracy, collecting unpaid taxes and ending unwanted and unauthorized federal programs.” Weapons, he says, “come in at costs that are so far above what they were supposed to be, because we don’t have people that know what they’re doing.” (The Pentagon has been trying for years, so far unsuccessfully, to bring its accounting systems up to current standards.)

It’s doubtful, though, that these proposed reforms will produce the billions of dollars in savings needed to fulfill the new president’s lofty ambitions. And while the Republican Party’s platform has called for lifting a congressional cap on defense spending, the prospects are at best uncertain, since Democratic lawmakers have said they will go along only if the GOP agrees to commensurate increases in nondefense spending — which most Republicans still oppose. The Democrats will have the votes to filibuster new spending initiatives they don’t like, although some Republicans have threatened to alter the filibuster rules.

Mass resignations follow any transfer of presidential power across party lines, but Trump’s ascension to power — built in part on his “Drain the Swamp” campaign slogan — seems certain to provoke an exodus by those who have attached themselves to the Obama administration’s big foreign policy goals. Among them: last year’s international global climate change agreement; the controversial UN-backed deal to obstruct Iran’s acquisition of a nuclear arsenal and pursuit of peaceful settlement in the Middle East that encompasses an independent Palestinian state.

Each of these initiatives could be pushed into a trash bin by Trump, if he keeps his word. Trump has called global climate change — a scientifically recognized phenomenon — an unproven foreign conspiracy and one of Trump’s national security advisory council members is Sen. James Inhofe R-Oklahoma, a well-known climate-warming denier. (Other members include the current chairman of the Senate Foreign Relations committee, Bob Corker, R-Tennessee; the chairman of the Senate strategic forces subcommittee, Jeff Sessions. R-Alabama; former Republican Attorney General John Ashcroft, and former CIA director Jim Woolsey.) During the campaign, Trump called the Iran nuclear deal “disastrous,” but experts say it’s unclear whether he would scrap it outright. Trump likewise has said he plans to undo proscriptions on exceptionally brutal interrogation techniques for suspected terrorists, such as waterboarding — but it remains unclear how the CIA or the military would react if ordered to use such methods again.

Those running the US military campaign against ISIS are doubtless even less clear about what might lie ahead. Trump has promised a decisive military defeat of ISIS, but never detailed how he would do it differently than the Obama administration. Instead, he’s assured audiences that he understands the task better than the generals in charge.

US allies in Europe, Asia and the Middle East might be wise to start reviewing their out-year military spending plans, because Trump has also promised to short-circuit US financial support for NATO, Saudi Arabia, Japan and South Korea unless each starts ponying up more funds to pay for associated military costs. The US share of total defense spending in Europe by all NATO members, for example, exceeds 70 percent, although some of this spending is for forces that can be used elsewhere in the world. Washington’s share of NATO’s direct budget (for its operations and staff) is far less — roughly 22 percent — but still larger than anyone else's.

At the third debate, Trump said, “We’re defending other countries. We are spending a fortune doing it. They have the bargain of the century ... We have to renegotiate those agreements.” He went on: “South Korea, these are very rich, powerful countries. Saudi Arabia, nothing but money. We protect Saudi Arabia. Why aren’t they paying?” Actually, they do pay billions of dollars to reimburse some US costs. But senior US officials, including Obama himself, have repeatedly expressed identical frustrations; in April, Obama colorfully called such countries “free riders,” virtually echoing Trump.

“After I’m elected president,” Trump said in an April speech, “I will ... call for a summit with our NATO allies and a separate summit with our Asian allies. In these summits, we will not only discuss a rebalancing of financial commitments, but ... discuss how we can upgrade NATO’s outdated mission and structure, grown out of the Cold War to confront our shared challenges, including migration and Islamic terrorism.”

Mexico and China should similarly ready themselves for tough new negotiations over trade and immigration, two of Trump’s signature issues. Mexico’s president said during the campaign that his country would not finance completion of a nearly 2,000-mile wall to halt immigration across the southern US border, despite Trump’s insistence that it could be forced to do so. Trump has also said he wants to renegotiate the 1994 North American Free Trade Agreement, which paved the way for smoother trade with Mexico and Canada.

Will America be less safe in a Trump presidency? The Obama administration’s nuclear arms deal with the Russians, the Republican party’s platform says, has flimsy verification provisions and wrongly allows Russia “to build up its nuclear arsenal while reducing ours.” He has promised to modernize US nuclear warheads — but it remains unclear whether or how his plan might differ from a modernization program already being aggressively pursued by the Obama administration.

Hillary Clinton accused Trump of being cavalier about a nuclear conflict, saying he had told Asian nations engaged in a nuclear competition, in effect, to “go ahead, enjoy yourselves, folks.” In March, Trump said, “maybe it’s not so bad ... if Japan had that nuclear threat.” He also said this is “going to happen whether we like it or not,” and that other countries such as South Korea and Saudi Arabia might also get the bomb unless the world gets “rid of them entirely.” But it’s unclear if this was a prediction or an endorsement, particularly when viewed alongside another remark by Trump last January that nuclear proliferation — including the seizure of a warhead by a madman — is “the single biggest problem that our country faces right now.”

Much speculation about Trump’s foreign policy has focused on how he will interact with Vladimir Putin. Trump has visited Moscow, where he tried to do some business, but he admitted during the second debate that “I know nothing about the inner workings of Russia.” From a distance, Trump has admired Putin for being “very much of a leader” with substantial popularity. But Trump has an exaggerated sense of Putin’s return admiration, believing that Putin called him brilliant and a genius; actually Putin called him talented and used a Russian word correctly translated as “colorful” or "bold" rather than brilliant.

“If we got along well, that would be good,” Trump said of Putin at the third debate. He also has said, with an odd casualness, that “I don’t happen to like the system” in Russia, but he hasn’t acknowledged the systematic stifling of dissent under Putin, which led to street protests by tens of thousands of citizens between 2011 and 2013 (Putin has alleged that Clinton, while at the State Department, helped finance and stoke those demonstrations, giving him ample motive to try to subvert her campaign).

Some Trump confidants and campaign contributors do have ties to Moscow. A Russian-American businessman, Simon Grigorievich Kukes, who was installed as the head of the Yukos oil empire after Putin’s government ousted one of his critics, contributed more than $150,000 to Trump’s campaign and a related joint fundraising committee, according to OpenSecrets.org, a nonpartisan group. A businessman who Trump identified earlier this year as a foreign policy adviser, Carter Page, has worked with state-owned Russian energy companies subsequently punished by US sanctions — which Trump might want to lift. Moreover, Trump’s campaign manager for four months this year, Paul Manafort—a longtime consultant to dictators and others of ill repute on the international stage — resigned from his managerial post shortly after new Ukrainian documents surfaced that linked him to the political party of a Putin ally.

Two years ago, Trump said “we should definitely do sanctions” in response to Russia’s takeover of Crimea by military force, rather than annexation through peaceful political means. (The Russian military’s occupation preceded a pro-Russian vote by Crimea’s population, representing a classic “rigged election” of the type Trump has been warning about at home.) But more recently, breaking with a broad consensus in Washington and allied European capitals, Trump has noted neutrally that “the people of Crimea ... would rather be with Russia than where they were. And you have to look at that.” He said his administration “will be looking at” lifting anti-Russian sanctions (which are currently slated to be renewed next month).

In short, the message Trump’s voters have now sent to the rest of the world is, “Brace yourselves. It’s going to be quite a ride.”