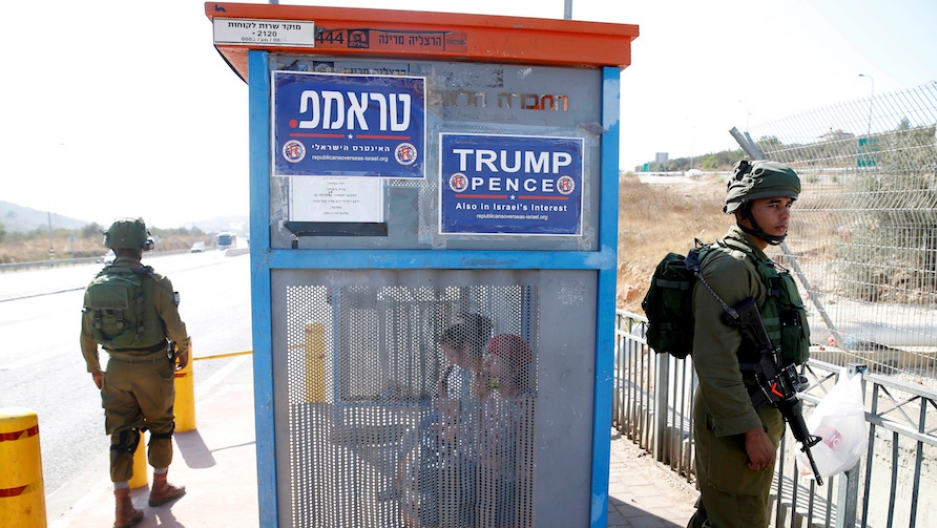 Israeli soldiers are pictured at a bus stop covered with posters from the Israeli branch of the US Republican Party, near the West Bank Jewish settlement of Ariel on Oct. 6.

As Donald Trump was delivering his acceptance speech at the New York Hilton Midtown on Wednesday morning, Syrian government forces were massing on the front lines surrounding eastern Aleppo.

President Bashar al-Assad is poised for a bloody battle to retake the entirety of Syria’s second-biggest city. After that, he will likely move on to crush the opposition to his rule across the rest of the country.

He will do so now in the knowledge that the next United States president will not stand in his way.

Across the Middle East and North Africa, authoritarian leaders and human rights abusers who have been admonished or inhibited by the US over the past eight years have welcomed Trump’s victory. Even allies who continue to receive US support, albeit with criticism or calls for restraint, are looking forward to a Trump administration that is more likely to look the other way.

Trump’s foreign policy positions are often vague, and in that regard, many expect his presidency to be unorthodox and unpredictable. But there are clues as to how he might shape the course of events in a region with a greater US footprint than anywhere else in the world.

The war in Syria has been one of the biggest global challenges for Barack Obama’s administration.

The outgoing president has tried to balance pushing for Assad’s departure, while simultaneously fighting ISIS. He approved limited support for moderate Syrian rebels in an effort to inflict enough damage on Assad to force him to the negotiating table.

The battle against ISIS has made some progress. The group has lost close to a third of its territory and faces ceding the largest city under its control: Mosul, Iraq.

Trump says it’s wrong to fight both Assad and the Islamic State at the same time and favors leaving the Syrian president alone to focus on the jihadist group.

Read more: ‘World War III’? How Trump and Clinton measure up on Syria

Trump has spoken little of Assad’s crimes: the pulverizing of civilian neighborhoods with barrel bombs, the use of starvation as a weapon of war, mass detention and torture inside government prisons and the deliberate targeting of hospitals.

The alternative, he claims, could be worse. And he does not distinguish between ISIS and other armed opposition groups.

“If they ever did overthrow Assad, you might end up with as bad as Assad is, and he’s a bad guy,” he said during the final presidential debate in October. “But you may very well end up with worse than Assad.”

Trump may be in the minority in Washington when it comes to Syria, but he finds common cause with Moscow, which backs the Syrian president with massive airpower and material support. This shared view has acted as a catalyst for a budding bromance between Trump and Russian President Vladimir Putin.

So how will Trump approach Syria?

The likelihood is that he will let Russia finish the job of defeating the uprising against Assad. He may also halt all material support to the Syrian opposition — which has come in the form of small-scale arms shipments to vetted groups through the CIA. Without that support, and without at least the pretense of pressure from the US, Assad’s position is stronger than it has been for a long time.

The reaction in Damascus to Trump’s victory reflects this new reality. Bouthaina Shaaban, a key adviser to Assad, told NPR on Thursday: “I think the American people have sent a great, a very important message to the world.”

In eastern Aleppo, few expected a major change from either candidate. The prevailing view there is that the US has given up on Syrians.

“Clinton and Trump are two sides for the same coin,” said Muhammad Edel, a resident of the city. “Nobody cares about our calls and sufferings.”

Trump’s isolationism extends beyond Syria. The US traditionally has paid lip service around respecting democratic norms in its Middle East allies. But Trump appears uninterested in upholding that perception of concern for things he doesn’t view to be directly in America’s interest. And he may turn the other way on rights abuses — something that could hearten authoritarian leaders across the region.

Egyptian President Abdel Fattah al-Sisi claimed to be the first world leader to congratulate Trump. Sisi took power in a 2013 coup that led to the killing of hundreds of protesters and has continued to punish any opposition to his rule. Trump praised that coup and called Sisi a “fantastic guy” after meeting him during the US presidential campaign. Trump is expected to form closer ties with the leader.

Turkey is another place where Trump is likely to be welcomed.

President Recep Tayyip Erdogan launched a wide-ranging crackdown on his perceived opponents following a failed coup and more recently against democratically elected Kurdish politicians. The coup attempt and its aftermath worsened relations with the US, which were already chilly due to Obama’s support for Kurdish fighters in Syria. Erdogan has lashed out at the US for not showing him support after the failed overthrow, and for not handing over Fethullah Gulen, a Turkish cleric in Pennsylvania whom Ankara accuses of being the coup mastermind.

The Obama administration supported Erdogan and opposed the coup, but also urged restraint in its aftermath as Erdogan was ordering mass arrests.

Trump refused to condemn the Turkish government’s actions, again preferring to turn inward. “I think right now when it comes to civil liberties, our country has a lot of problems, and I think it’s very hard for us to get involved in other countries when we don’t know what we are doing and we can’t see straight in our own country,” he told the New York Times.

Trump has promised to build better relations with countries in the region that are unhappy with Obama, but he has also vowed to undo some ties that were repaired.

There is a sense among some US allies in the region, such as Saudi Arabia and Israel, that Obama’s pursuit of a deal with Iran over its nuclear program emboldened Iranian leaders at their expense.

The deal blocked a path for Iran to acquire nuclear weapons, but it was fiercely opposed by numerous members of Congress and by Trump.

Speaking in March to the American Israel Public Affairs Committee, a pro-Israel lobbying group, Trump said he would “dismantle the disastrous deal with Iran.” But he has also conceded that it would be very difficult to do so, saying instead he would “police that contract so tough they don’t have a chance” to break it.

He’s right that undoing the deal would be extremely hard. The agreement was signed not just by the US, but also by China, France, Germany, Russia and the United Kingdom. A unilateral move by the US to undo sanctions relief for Iran would not necessarily mean the deal’s downfall, but it is a risk.

“Iranian officials are already insisting that the US must abide by its ‘commitments’ under the terms of the deal or else be held ‘liable’ for the deal’s collapse,” writes Derek Davison, an analyst for the foreign policy blog, LobeLog.

Dismantling the Iran deal would worry allies in Europe, but it would be music to the ears of the prime minister of Israel, Benjamin Netanyahu. He has long opposed any pact with Israel’s archenemy.

While Obama has clashed with Netanyahu, primarily over the Iran deal, Trump has made great efforts to woo him. Trump promises to recognize Jerusalem as the “undivided capital” of Israel — something member countries of the United Nations oppose, viewing east Jerusalem as occupied territory.

The president-elect has also indicated he will not oppose Israeli settlement construction in the West Bank. Those settlements are illegal under international law and the US has repeatedly opposed them, despite continuing to deliver massive military aid to Israel.

In a statement congratulating Trump on his victory, Netanyahu called the president-elect a “true friend of the State of Israel.”

“We will work together to advance the security, stability and peace in our region,” he added. “The strong connection between the United States and Israel is based on shared values, shared interests and a shared destiny.”