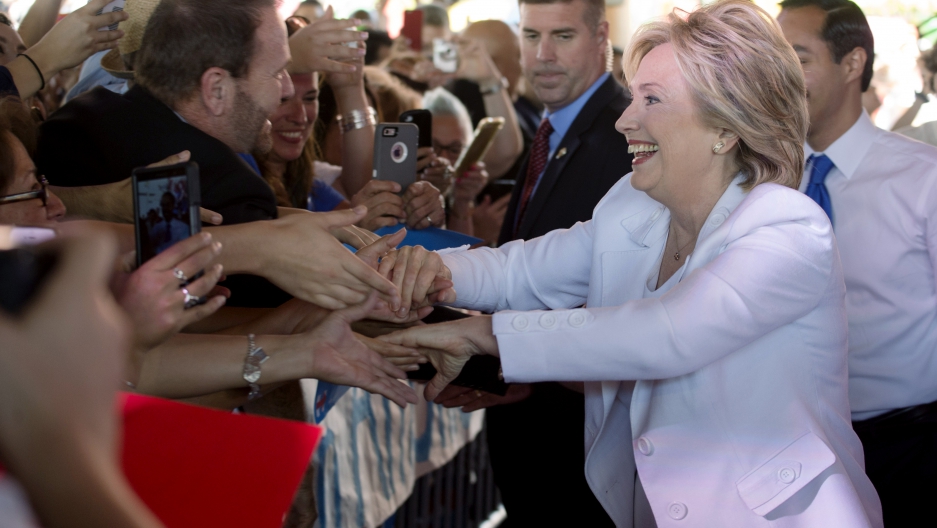 Democratic US presidential candidate Hillary Clinton greets supporters at the conclusion of a "Latinos for Hillary" rally in San Antonio, Texas, October 15, 2015.

Even from the center of a deep red state that went for Donald Trump, the outcome of the election was shocking for Kat Carey.

She’s a Latina mom of a 5-year-old who goes to a co-op school with the motto “teach in peace through culture.” Tuesday, I watched the kids there vote to elect Hillary Clinton by an overwhelming majority, and rejoice afterward by chanting“Hil-lar-ry! Hil-lar-ry!” They live in a city that was a speck of blue amidst a sea of red on the electoral maps.

“Being in San Antonio, Texas — you say Texas to people that aren’t from Texas and you think Republican country. But our city is in a very democratic city and I live in a bubble,” Carey says. “Everyone I know — there’s a small handful of people who voted for Trump — but, as far as my friends, my family, we’re just in this bubble of not-hatred.”

Even in Texas, public support for Trump in the run up to the election was muted. His election blindsided people like Carey who didn’t realize what her neighbors thought and felt. The sudden realization had Clinton supporters vacillating between being dazed and being panicked. Whether true or not, many perceive Trump’s win as a rejection of multiculturalism in this country.

I asked Ivy Taylor what she could do to bridge the yawning divide we can suddenly see between Trump and Clinton supporters. Taylor is San Antonio's first African American mayor, which she adds says something about how progressive San Antonio is. But even here, in a blue speck, people feel like they have to be careful about what they talk about. Especially in a state that allows citizens to open carry guns.

“I really don’t know how to broach the conversations around the national issues because I think folks get pretty emotional and have staked out positions,” Taylor says. “So I try to focus on the things that I know bring us together.”

And many people have been brought together by this election. I talked to three millennial activists — including Denise Hernandez — who worked together to urge African Americans, LGBTQIA people and Latinos to vote. Talking to them made me realize that this last year has been the testing ground for a new generation of leaders, burnished by the division of the past few months and now, resolutely ready to forge ahead and find ways to protect people from Trump’s policies.

“The work we’re doing is getting places and we are being heard. It’s not that we’re being heard because they want to listen to us. It’s because we’re forcing ourselves in the conversation,” Hernandez says. “And we’re saying ‘you’re going to listen to us because this is our country.’ I feel really powerfully about that and I’ve been trying to get other millennials to feel the same way. And I think in some small capacity in San Antonio, I have.”

What happened last night does make her cry. But at the same time, she’s planning. And in the next five years, Hernandez wants to take a first step — onto the San Antonio city council.