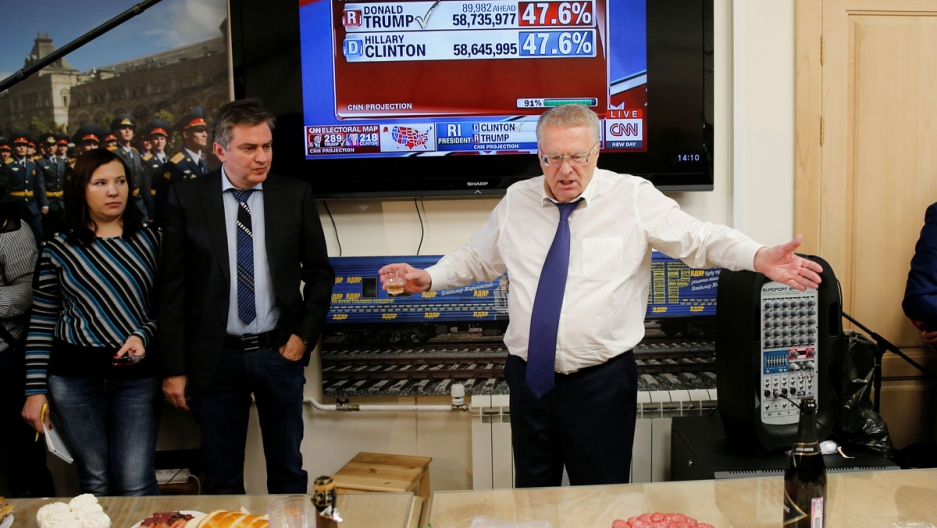 Head of the Liberal Democratic Party of Russia Vladimir Zhirinovsky celebrates Donald Trump's election as president by drinking sparkling wine with other party members in Moscow.

Reactions in Moscow to Donald Trump’s victory in the US presidential election can only be described as “euphoric,” according to veteran Moscow correspondent Charles Maynes.

"Russian elites from Putin on down have been absolutely thrilled with the result,” says Maynes. “For example, in the Duma — the Russian parliament — when the results were announced that Mr. Trump had triumphed, lawmakers broke out into applause.”

Russian President Vladimir Putin congratulated Donald Trump on his election victory. In a telegram, he acknowledged that there's currently a crisis in US-Russian relations, but he also expressed hope that the crisis may now come to an end.

Trump and Putin expressed admiration for each other during the long US election campaign.

The pro-Kremlin elite in Russia is looking for what Maynes calls “a complete relaunch of Russian-US relations.” In particular, Putin’s people are hoping for an easing of the sanctions imposed after Russia’s invasion of Ukraine and annexation of Crimea. The markets in Russia went up after the US results were announced on the hope that sanctions might be relaxed.

There are also Russian hopes of halting or slowing the expansion of NATO into Eastern Europe, or, say, the deployment by NATO of a missile defense shield.

Then there’s the issue of Syria, and the fight against ISIS. Russia is currently at odds with Washington over its support for the regime of Syrian president Bashar al-Assad. Trump's intentions in Syria have been vague, though he's been clear about a preference for overwhelming force against ISIS in the form of bombings.