Refugees and migrants try to warm themselves as they take a break at a gas station before abandoning their trek to the Hungarian border, in the town of Indjija, Serbia on Oct. 5.

The people smugglers in Serbia’s capital are easy to spot and do little to hide. They’re in the parks and bars near Belgrade’s train station, selling journeys through the Balkans to northern Europe.

Some are flirting with the Serbian bar tenders, sipping brandy shots while answering multiple cellphones. Others are in deep discussion with potential customers. The “travel agents” operate a brisk business all day long.

Their Arabic chatter is punctuated with mentions of itineraries: “hudud Hungaria” — the increasingly militarized “Hungarian border” — or “hudud Kuruatia,” the Croatian border — passages to northern Europe.

Newly arrived families shuffle through the door, some with their clothes damp and caked in mud after days trudging through the Bulgarian undergrowth.

Last year, more than 800,000 mostly Syrian refugees went in boats from Turkey to the Greek islands, and trudged up southeastern Europe to reach countries like Germany and Sweden. This deadly obstacle course was referred to as “the Balkan Route.”

But on March 9, 2015, the Greece-Macedonia border was sealed with razor wire and phalanxes of police and military. European Council President Donald Tusk triumphantly announced the Balkan path was closed to irregular migration.

Yet, he can look no further than Serbia to understand that closure is still more aspirational than reality. An average of 100 to 200 refugees enter Serbia daily and there are more than 6,300 now stranded across the southeastern European country, according to the United Nations refugee agency, UNHCR. The route remains open, though narrower, and is controlled by transnational smuggling gangs that operate from Kabul to Berlin.

'Everyone knows who they are'

Saboor, 26, comes from Jalalabad, Afghanistan, where he was a crane operator and used to help retrieve damaged US military vehicles for the NATO-led security mission. (The names of asylum seekers in this story have been changed to protect their identities.)

He waves his hands in the direction of a muddy stretch of land that’s now colloquially known as “Afghan park.” 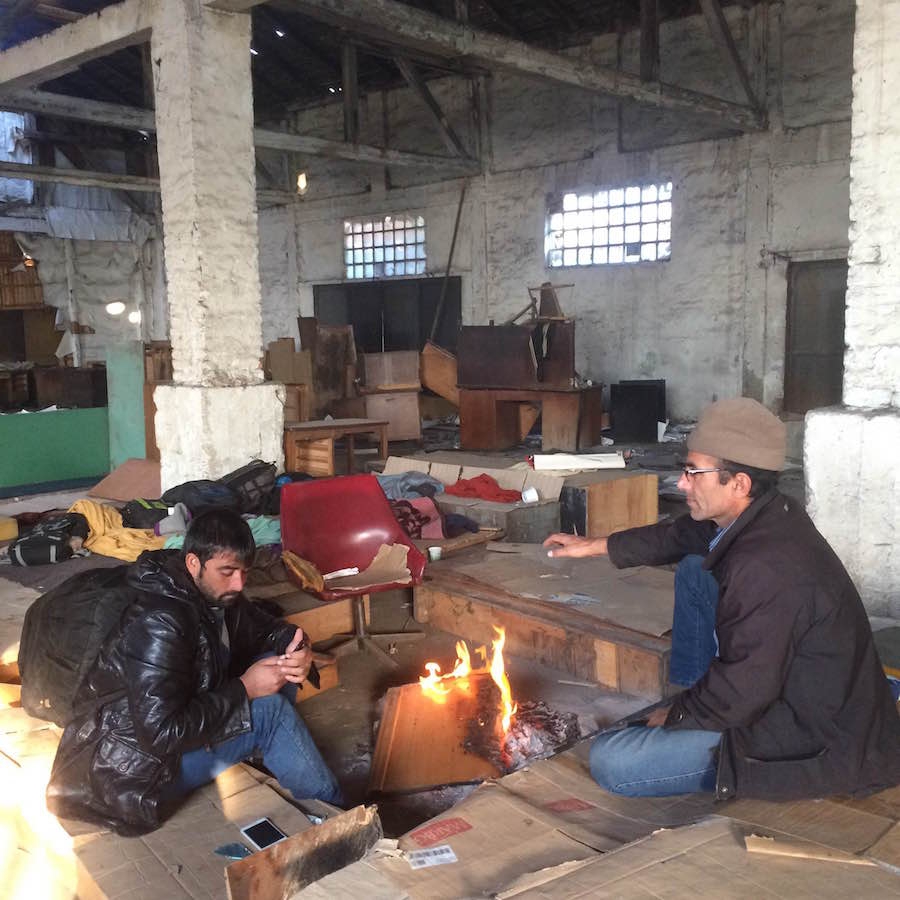 Men from Afghanistan burn fire at an abandoned warehouse near the River Danube.

Serbia’s neighbor to the north, Hungary has taken a hostile stance toward foreign migrants. However, the country still allows 30 refugees per day across its border. But those are almost exclusively families, leaving lone male travelers like Saboor stuck in Serbia.

He has tried numerous times to breach Hungary’s fence, but Hungarian police sent him back to Serbia. He says he will keep trying. Saboor describes traveling thousands of miles through Afghanistan and Pakistan, and dodging soldiers’ bullets in Iran. It all makes a mere Hungarian fence seems surmountable.

With a family to sustain and danger at home, going back to Afghanistan is not an option.

“I started to get calls from the Taliban threatening to kill me,” he says. “I asked the embassies for visas but they told me it would take two years — I can’t keep myself there for that long.”

Saboor sleeps in drafty abandoned warehouses along the river Danube. And twice a day he heads to a park where charities serve food to a long line of hundreds of asylum seekers.

A nearby shelter run by the humanitarian group Miksaliste — Serbian for “mixing place” — is buzzing with activity. Its shelves are stocked with winter clothes, doctors attend to the sick and mothers rest with their kids. Children’s drawings adorn the walls. One picture depicts life in Afghanistan: Bullets fly in all directions from guns, tanks and helicopters. One figure standing beside the gunfire seems to be trying to tune it all out.

An Afghan child's drawing at a shelter for migrants in Serbia.

There’s a growing trend of young refugees getting caught up in the smuggling racket, says Albert Grain, a volunteer co-ordinator for Miksaliste.

“We all know who the smugglers are and many of the footmen are not above 20 years old. A lot of them ran out of money for their journey, so they work for a couple of months instead of paying for their next bit of travel. That’s very common. Since the border’s closed, the gangs built an empire here,” Grain says.

Sent to Europe by their parents for a better, safer life, the growing number of unaccompanied minors appearing in Belgrade also presents a lucrative market for the smugglers' sinister side businesses.

Jelena Hrnjak, director of Atina, a Serbian nonprofit that works on anti-trafficking and gender-based violence, hints at the horrors facing minors stranded on the EU’s border.

“We have seen cases of smugglers forcing boys as young as 14 to strip, molesting them, taking pictures and sending them to their parents as a way of extorting further money,” Hrnjak says. “Their lack of protection puts them in this position and makes them unable to speak about it or try to find help.”

Hrnjak says the power dynamics and transactional nature of the furtive voyages into Europe mean that some child refugees may face worse danger even after the journey is finished.

'They could be in much more trouble when they arrive'

“Some minors have testified that they didn’t have the money, but agreed with the smugglers that they will somehow pay when they reach the destination countries, which is an indicator that they could be in a debt bondage. They could be in much more trouble when they arrive,” she says.

A spokesman for aid agency Doctors Without Borders, or MSF in its French spelling, also vouched for increasing risks migrants face.

“The militarization of these countries’ borders has led to a staggering increase in violence,” the spokesman, Andrea Contenta, told us. “MSF data shows that nearly one in three patients attending our clinics in the Balkans reported abuse and violence, including women and children. While smugglers may bear the responsibility for much of this violence, patients report that at least half is perpetrated by state authorities.”

Based on the going rate, confirmed by many refugees, and the estimated daily numbers on the move through Serbia, smugglers in Belgrade could be netting more than $300,000 combined per day, or $9 million per month.

The Krnjaca camp is a bleak collection of barracks spread out behind a Roma settlement and a landfill out in the Belgrade suburbs. It used to house Serbian families displaced from the wars in Kosovo and Bosnia 20 years ago. Now it’s a temporary home to refugees and migrants from Syria, Afghanistan, Sudan and even Cuba. Some Syrian children play on squeaky swings, singing songs about the destruction they fled in their homeland, and the tahreeb (smuggling) they used to escape.

Soft-spoken English teacher Amrullah, from the restive Kunduz province in Afghanistan, claims he was tricked by a smuggler offering “guaranteed” passage from Turkey to Italy but who dumped him in Serbia instead. The smuggler vanished with the deposit.

“Some of my family members, they tell me more than a hundred times, ‘start smuggling here, you will earn money easily and get out,’ but I don’t want to do such a thing,” he says.

Amrullah’s friend Abdul-Sami, a recent graduate from medical school in Kabul, adds: “They call this an asylum center, but really nobody is claiming asylum in Serbia, they are just waiting for the smugglers.”