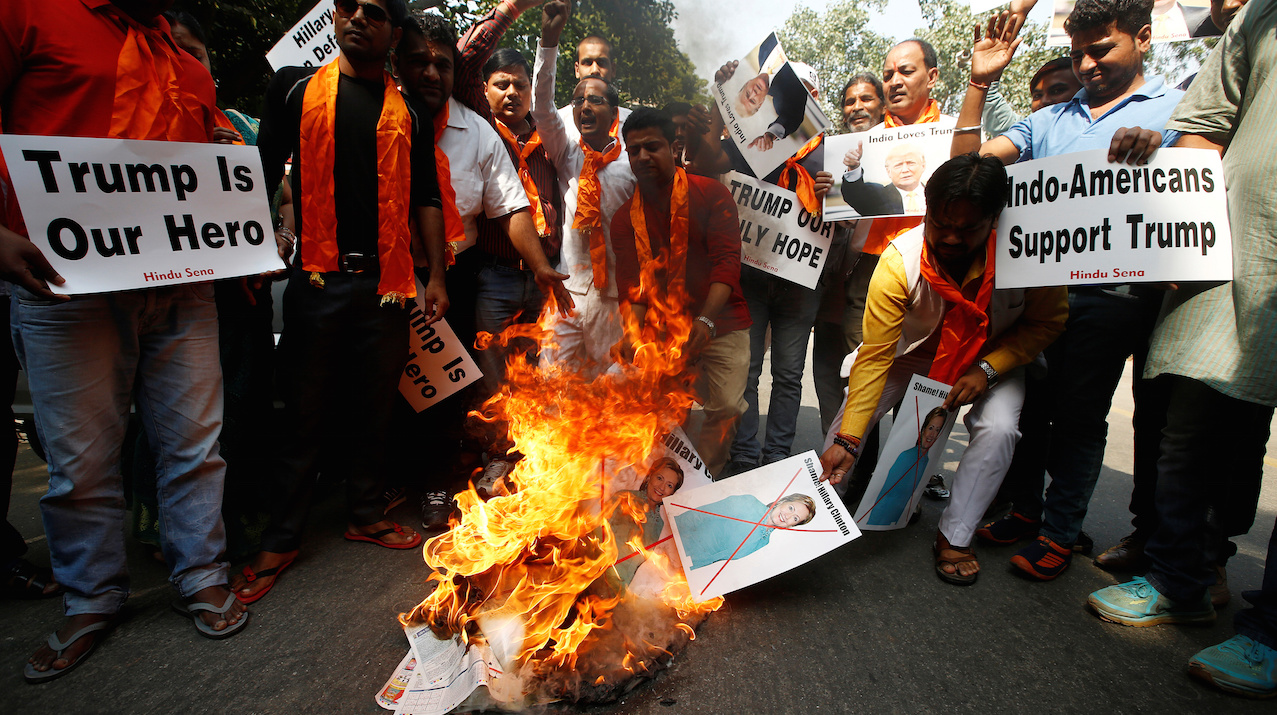 Members of Hindu Sena, a right-wing Hindu group, burn posters of Democratic presidential nominee Hillary Clinton during a protest against what they said was Clinton sabotaging Donald Trump's election campaign, in Delhi, India, on Oct. 18, 2016.

Donald Trump’s victory may have stunned the world, but some folks in Delhi have known it was coming for a while.

For months, Gupta and the Hindu Sena have been vocal about their support for Trump. Back in June, they threw him a birthday party. They held a Trump victory celebration last week, before US voters went to the polls.

In addition to astrology, Gupta based his prediction of a President-elect Trump on the count of Republican governors in major US states, and a dip in the stock market — a dip always accompanies a Republican victory, he said.

“Now, there will be peace in the entire world as Islamic terror will be eradicated,” Gupta said. “Pakistan will wipe out its hidden terror cells on its own, or India and the US will destroy them together.”

The Hindu Sena is notoriously anti-Muslim. One of the big reasons they're so fond of Trump has to do with his harsh rhetoric against Muslims and Islam.

Many others in India, however, are not so certain of US-India camaraderie under Trump.

“This [win] is indicative of a growing sense of hate, and whether we like it or not, it's very clearly targeted at those like us,” said Akanksha Kapoor, a public health professional in Delhi.

Kapoor wants to apply to US universities for a Ph.D., but is worried about Trump’s “unreliable stand” on work visas for Indian students. On the one hand, Trump has spoken about “very smart” Indian students who should not be kicked out of the US immediately after graduation. On the other, he has expressed opposition to H-1B visas for foreign workers.

“If he's going to enforce some kind of bond for those of us who choose to study there, that's not something I'm sure I want to sign up for,” Kapoor said. “There's also the people I'd be living with, people I'd be living around. To say that it's scary to go into the us-versus-them battleground the US has proved itself to be would be an understatement.”

For other Indians like Vanya Kumar, a lawyer working in The Hague, this is as good a time as any to question American hegemony and how it uses its power abroad.

“The cultural impact [of the US] is as potent as their military prowess, and if there indeed is a radicalization of opinion that's going on in the States, then it should be contained,” said Kumar, who believes Trump should have been disqualified or at least discredited for his rhetoric.

Kumar also feels that it is time for liberals to think deeply about their agenda.

“It is increasingly clear that the left, and its ‘intellectualism’ and condescension towards the ‘other side’ and habit of talking down to them and creating this huge divide with the working class, has really failed the people,” she said.

Apathy on the left and the rise of right-wing populism are features of India’s own political environment, especially since the massive majority handed to a Hindu nationalist government under Narendra Modi in 2014. While support for the controversial leader has remained steady, critics have complained of rising intolerance, censorship and religious polarization under Modi’s watch.

“While I expected Mrs. Clinton to win, Trump's victory doesn't come as a huge surprise given how right-wing nationalism and xenophobia is the order of the day all over the world — be it Hungary, USA or India,” said Happymon Jacob, a professor at Jawaharlal Nehru University in Delhi.

Jacob sees a strong similarity between Trump’s and Modi’s victories.

“They both managed to capitalize on the anger of the masses ... and cleverly used if for electoral purposes,” he says. “[Now], progressive liberals have to seriously introspect why their ideals and politics have taken a severe beating across the world.”