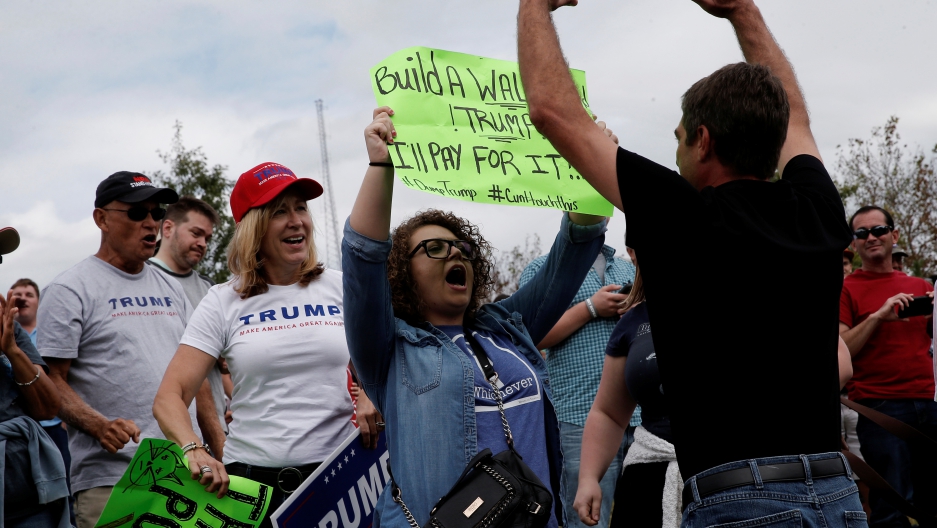 A supporter of Republican US presidential nominee Donald Trump tries to block a demonstrator from holding up a sign at a Trump campaign rally in Greensboro, North Carolina, October 14, 2016.

Given all the acrimony and disgust around this most recent presidential election — the calls to “lock her up,” the allegations of sexual assault — it’s hard to imagine how the country can put politics aside and return to normalcy once again.

According to a recent New York Times/CBS News poll, more than 80 percent of voters reported feeling disgusted with the election, while another poll showed a sharp partisan divide when it came to the direction the country’s moving in. In such a toxic and volatile political atmosphere, and with such sharp disagreement over basic assumptions about progress, is there anything the next president could say or do to unite the country once again?

Historian Paul Aron believes today’s politicians could take a cue from America’s founding fathers, who, he says, had vicious and even violent squabbles of their own, and yet were still able to come together for the good of the country.

“Given how nasty the words were, in one sense it's remarkable there wasn't more bloodshed,” Aron says.

Take, for example, the feud between Thomas Jefferson and John Adams. Though they started as friends and worked together in George Washington’s first presidency, their relationship soon devolved into a bitter partisan disagreement.

Fueled by the Quasi-War with France and the horrors of the French Revolution, what started as an ideological disagreement over the proper size and strength of federal government soon intensified into a bitter rivalry, which only intensified when Jefferson and Adams were pitted against one another in two consecutive elections. Aron says on the day of Jefferson’s inauguration, John Adams left Washington and never returned.

Despite their intense hostility, the two eventually did reconcile. Spurred on by a letter Adams sent Jefferson in 1812, the two began a prolific correspondence, writing more than 150 letters over a 14-year period. In those letters, the old friends talked about politics and philosophy, as if their rift had never been personal.

In one of the great historical coincidences in American history, the two died on the same day in 1826, on the 50th anniversary of the signing of the Declaration of Independence.

Included below are excerpts from an interview with Aron about the rivalries among America’s founding fathers.

On the scathing rhetoric at the time

The insults that they had put us to shame. It is so much more scathing and so much more eloquent. One of my favorites is from Thomas Jefferson, writing to James Madison about Patrick Henry. He summed it up by arguing that "what we have to do, I think, is devoutly to pray for his death." Or you have Abigail Adams on Alexander Hamilton saying, "I have read his heart and his wicked eyes many a time. The very devil is in them."

George Washington generally stayed above the fray, and most people were afraid to attack him, but Thomas Paine wrote to him and said, "And as to you, sir, treacherous in private friendship (for so you have been to me, and in the day of danger) and hypocrite in public life, the world will be puzzled to decide if you're an apostate or an imposter, whether you have abandoned good principles or whether you ever had any."

On the rivalry between Aaron Burr and Alexander Hamilton

In his last days Burr was reading the novel Tristram Shandy, and this is a novel in which a character is tormented by a fly and upon catching it says, "This world is surely wide enough to hold both thee and me." Burr’s almost last words, according to his 19th century biographer were, "I should have known that the world was wide enough for Hamilton and me."

Perhaps Burr deserves some appreciation in this age where we are as divided as the founders. He was certainly an opportunist. The criticism of him as such was valid, but he did try to appeal to both Federalists and Republicans, even if it was only to advance his own ambitions. Perhaps that provides some lessons for us given our own ideological divides.

On the rivalry between Thomas Paine and William Cobbett

I think another wonderful example of reconciliation would be Thomas Paine and William Cobbett. Paine is fairly well known as the author of Common Sense and An American Crisis, pamphlets that inspired Americans to independence and revolution. Paine was too radical for most of the founders. His support for the French Revolution and his attacks on religion were just too much for most of the founders. John Adams even said Paine was "begotten by a wild boar and a bitch wolf."

Cobbett, another popular and aggressive Federalist writer of the time, managed to attack Paine even more viciously. Cobbett wrote, "How Tom gets a living now or in what brothel he inhabits, I know not. Like Judas he will be remembered by posterity -- men will learn to express all that is base, malignant, treacherous, unnatural and blasphemous by the single monosyllable: Paine."

And yet, there is a reconciliation. When Cobbett returned to England he found himself disillusioned by the corruption and inequality he saw there. So he turned around and decided that Paine was right about everything. And this led to one of the most remarkable stories I've heard. In 1819, Cobbett stumbled through the dark in New Rochelle, where Paine was buried, and he dug up Paine's corpse with the intent of taking the bones to England so a proper monument could be built for him there. At the customs inspection in Liverpool he announced, "There gentlemen are the mortal remains of the immortal Thomas Paine.”

We don't know what happened to Paine's bones. It's one of the mysteries of history. We know Cobbett's son J.P. inherited the bones when Cobbett died in 1835, but no one knows where they are today.

This story was first published by To The Best of our Knowledge. Subscribe to the TTBOOK podcast. See more of their episode, Reconciliation.