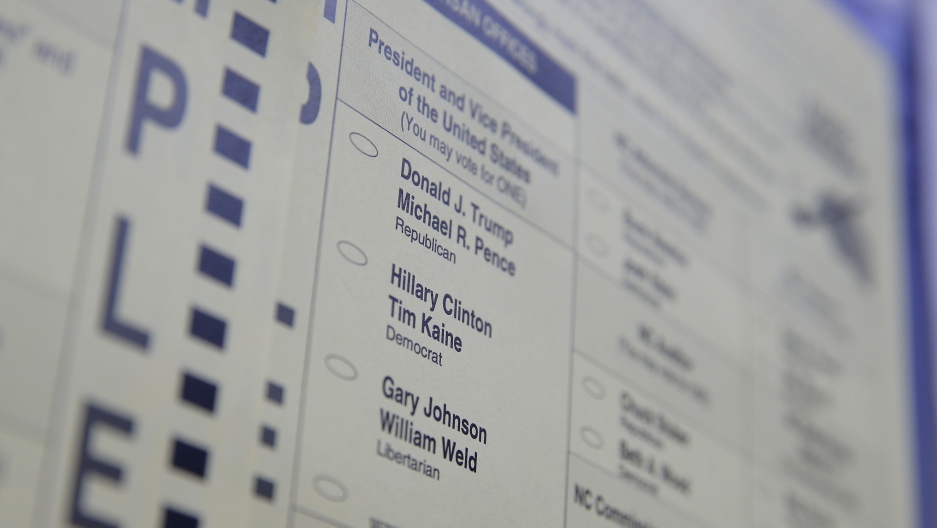 A sample ballot is seen on the wall at a polling station during the US presidential election November 8, 2016.

The Electoral College doesn't grant electoral votes to US territories. That's why the votes from the island of Guam, where America's day begins, won't count toward the presidential tally. But the island's straw poll has accurately predicted the results of the US presidential election for 32 years.

Polls in Guam have closed now, and this year, voters on the island supported Hillary Rodham Clinton: With all 67 districts reporting, Clinton defeated Donald Trump 22,972 to 7,747, according to Tom Maxedon, news director at Public Radio Guam.

Turnout was about 69 percent, Maxedon says. This is an increase from previous years. In 2012, 67 percent of registered voters in Guam cast their ballots. Among the 50 states, the turnout was only 61.8 percent.

Despite the fact Guam’s votes don't officially count towards the results of the election, Guam has historically had a higher voter turnout than the mainland United States. The island is home to three US military bases and a large number of current and former service members.

Maxedon talked to one voter who serves in the US Coast Guard whose main concern was security. “She said if we are going to have a president who's going to ask us to go to war, we’d like somebody in the White House that is stable. She said she does not feel Donald Trump is a stable individual and it terrified her ‘to have his finger on the button,’” Maxedon says.

Maxedon believes security is top of mind for Guam residents. According to the Guam Office of Veteran Affairs, at least one in eight adults in Guam are veterans.

So why do Guam’s citizens participate in this straw poll if their votes don’t actually count? According to Maxedon, it’s a way of saying: “‘Hey, we might just be a small, tiny island in the western Pacific, but we deserve equal representation with the rest of the nation.’”

For many residents, not being able to fully participate in the US electoral system is “a very bitter pill to swallow,” Maxedon says.

While neither candidate campaigned in Guam, Maxedon says it appears Trump just does not sit well with the people in the community.

“Most people told me [that] his divisiveness, his overt racism, and when you are talking about putting walls up in the United States, for instance ... it’s just not something that goes well for this community,” he says.

Maxedon described Guam as a tight-knit place that votes more along familial than party lines.

“If you have an aunt, or an uncle, or father, or grandfather who voted one way, you are more apt to vote that way,” Maxedon says.

For the past 12 years, the governor of Guam has been a Republican. Guam’s unicameral legislature “has been ten to five in favor of Democrats,” Maxedon says.

So what do today’s results really mean?

“The number one takeaway I got from talking to people was that they simply wanted change,” he says.