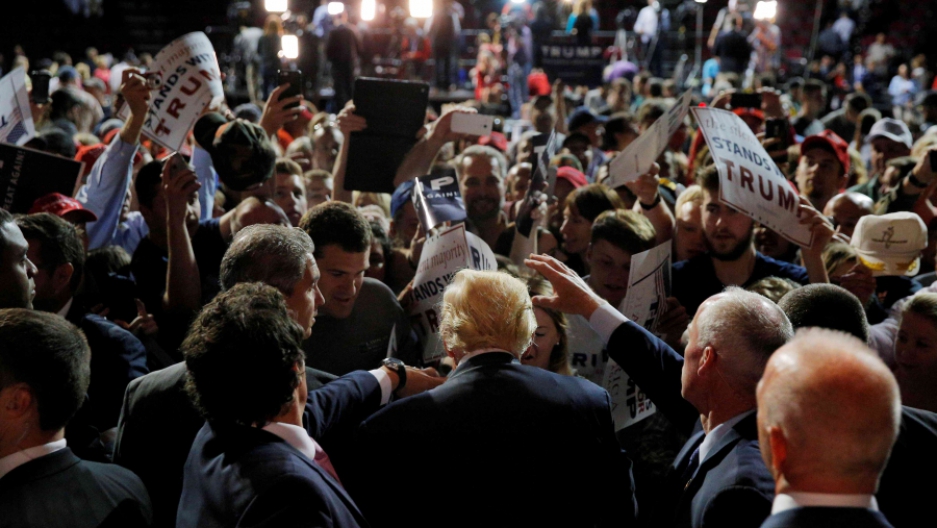 Donald Trump appears at a campaign rally in Maine.

Maine is at the intersection between the so-called “liberal elite” and ambiguous “small town America.”

The New England state is "very much in the middle" says copywriter Jennifer Smith from Durham, Maine. But, the middle of what?

According to the American Communities Project, there are 77 counties around the country considered “Middle Suburbs.” They are growing and changing, but not as quickly as their more urban-centric neighbors.

Her community in Androscoggin County is more white and less wealthy than places nearby. It's situated between Portland, the state's largest city, and Augusta, its capital. Tourists do come in the summer, but many pass them by for towns with more attractions that cater to a seasonal crowd.

The town of Durham is working to try to capitalize on the summer influx while maintaining an infrastructure that functions when the money freezes up during the colder months.

"There's not much in Durham right now," she says. Smith works from home, so she doesn't worry about low employment for herself, but she’s concerned for her neighbors and friends who have had a tough time making it through the recession, which has "lasted longer in communities like mine."

Smith is also a native of the area, so she's not afraid of the cold winters that make her community less attractive to newcomers. "I like being close to everything," she says, but not too close. “I like being in the middle!"

Smith may love Durham's not-quite metropolitan vibe, but her community is working to develop more. It's needs, Smith says, are mainly employment and education based.

"We need to send more kids to college so they can get better jobs," she adds.

It's not just schools. The town is working to improve prospects for itself and it's citizens. "We're undergoing a spruce up of sorts," she says. Nineteenth century buildings are being revived as a part of an initiative to attract tourists, but also as an investment for the folks that call Androscoggin County home year-round.

Maine has a complicated political reputation. While it leans Democratic in presidential elections, it is one of two states that divvy up electoral votes by Congressional district, so Republican Presidential Candidate Donald Trump has campaigned heavily in places like Androscoggin County. Maine's Governor Paul LePage, who grew up homeless one town over from Durham, very publicly supports the GOP nominee, and tangles with Maine's Democratic legislature.

This leaves communities like Durham stuck in the middle. Just like her district, Smith voted for Obama in 2008 and Romney in 2012. And she's frustrated that the country continues to engage in conversations about immigration and race when so many remain under employed.

"I wish we could spend more time helping people get jobs and less time hashing out big cultural debates," she shares.

So what's important in middle suburbs? Growth, but also preservation of the community and jobs that have always been there. And how does a town like Durham lean?

"We're in the middle of figuring that out too."