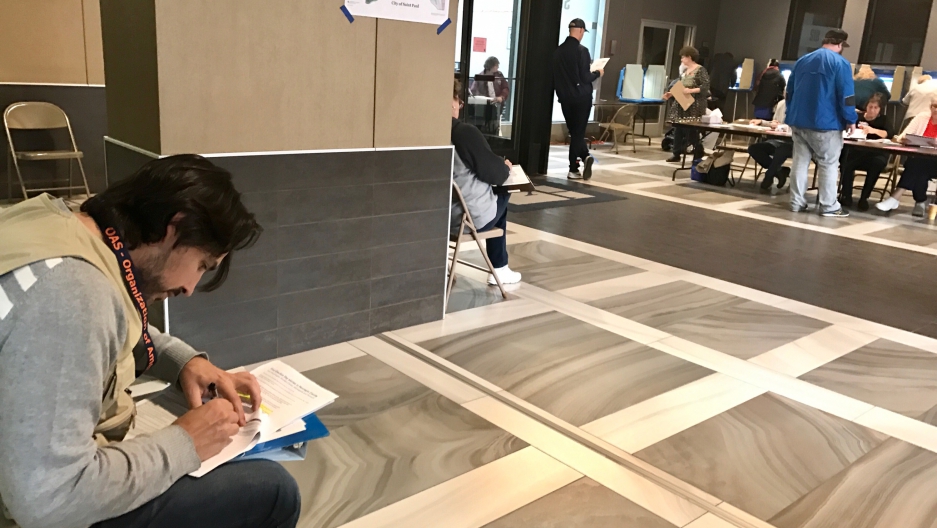 Julian Najles, left, is an Organization of American States electoral observer from Argentina. He’s at a polling place in downtown St. Paul, Minnesota, on November 8, 2016. The OAS will file a report on what went well and what could be improved after this year’s election.

The phrase “the world is watching” has been a common refrain in reference to the US presidential election, and in one sense it's literally true: The Organization of American States has deployed 41 international election monitors to polling places across the country to observe the election.

The observers, invited by the US representative to the OAS, Kevin Sullivan, have been spread out across 12 states and Washington, DC, since early voting began. They are meeting with election and party officials, and are gathering data for a report on the fairness and accessibility of the election. The preliminary results will be announced on Wednesday.

It’s the first time the organization is monitoring US elections.

So how is US democracy doing? So far, so good — with some caveats, says Gerardo De Icaza, the director of the OAS Electoral Cooperation and Observation Department.

“Are there things that could improve and coordinate better? Yes, and we will share some of those things in the final report,” De Icaza tells PRI. “Are those things a determining factor in the legitimacy of the election? I can tell you right away, no. These are things that can be improved. They should be improved. But they do not put into question the integrity of the election.”

Real-time: Follow along with PRI’s live blog for election day.

The observers have all done similar work for the OAS in other countries. This year, the OAS has completed seven other “electoral observation missions,” including in Haiti and Colombia. The US mission had unique obstacles to overcome.

“One of the things that was a challenge for us, is because the US is so big and there are so many different states, and so many different regulations in these states, we wanted to have observers that are really more experts than observers,” De Icaza says.

On Tuesday, Julian Najles, an OAS electoral observer from Argentina, has a binder in hand as he watches voters lining up at a polling station in St. Paul, Minnesota. Voters say there was a rush in the morning, but by early afternoon the lines are moving quickly.

On election day, OAS observers carry forms with them to track several factors, including wait times and length of lines. They also document any incidents they see in polling places, and whether regulations, like voter ID laws, are followed. The OAS considered several criteria in determining where to send observers. They aimed to cover a wide range of geography and political inclination (red, blue and purple), as well as states with different types of election regulations.

Najles is visiting the same three polling places in Minneapolis and St. Paul in the morning, afternoon and evening to gauge the process. He'll call in his finding to OAS headquarters and he isn’t permitted to speak with reporters about what he sees.

Lynne Navratil, 65, from St. Paul, was surprised to see an international observer as she voted Tuesday. She'd never heard of the OAS, but once she learned what they do, she supported the program.

“Any independent body that can vouch for the election, and the ethical process of the voting, is a good thing. Especially in light of a candidate who insinuates that the election might be rigged if he doesn’t win,” she says.

During his campaign, Republican candidate Donald Trump has claimed many times the election process is biased against him.

De Icaza says OAS observers can't interview voters or interfere in anyway, and that their objective is to issue an impartial report on the election, taking into the account the US’ national and historical context as well as international standards. In addition to observing, experts are analyzing a range of topics from campaign finance to gender issues, the role of media and voting technology.

The report, he explains, will be be a form of constructive criticism. It will outline what is strong about the voting process in the US, and potential areas for improvement.

De Icaza is careful to emphasize the nonpolitical nature of the mission, but he does address claims the election is “rigged.” While the OAS is still compiling its report, it has yet to find evidence it’s “rigged” in any systematic way.

“We really have to define what ‘rigged’ means. It’s a general term, which doesn’t imply concrete things. If we’re talking about this election as rigged in the sense that the system benefits one candidate over the other, I don’t believe that’s the case at all. I have seen no evidence of that. Does it mean that we’ll see widespread fraud across the country Tuesday? I really don’t think that’s the case,” he says.