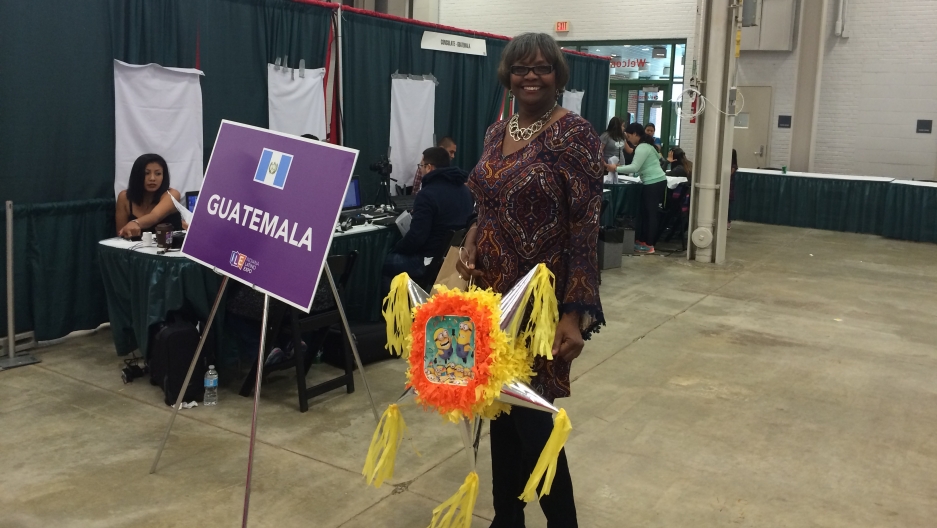 At the Indianapolis Latino Expo, Mary Clark stands with a piñata in front of a consular station from Guatemala. Immigrants from surrounding rural areas as far as Kentucky and Ohio came to Indianapolis for the event. At one time, Clark says she was not very welcoming to immigrants.

At fairgrounds in Indianapolis, where the Klu Klux Klan once rallied, immigrants have taken over for the day. A Venezuelan grills arepas and a cafe sells Cuban sandwiches, while Central Americans wait for consular services.

Working the room looking for business partners is Mary Clark. Eleven years ago she helped create one of the most diverse commercial areas in the country. But, so far, there are no Venezuelan vendors. So Clark approaches the owner of the Venezuelan food truck with a pitch for her International Marketplace.

“On the west side of Indianapolis, we have this great place where there are over 70 different languages spoken, 40 different markets,” she says. “It’s a beautiful place to come and learn and just embrace yourself in the different cultures.”

The conversation ends with Clark giving the vendor a hug and the vendor promising to call.

This election year, Indiana has made headlines as a place that does not welcome immigrants. Mike Pence, the Republican vice-presidential nominee and Indiana’s governor, says he would ban Syrian refugees from the state. To Clark, the governor's platform goes against efforts like hers to welcome immigrants as people who can keep cities like Indianapolis vibrant. It also goes against dramatic demographic shifts in a state where the immigrant population has more than doubled over the past 15 years, according to the Brookings Institution.

But when Clark, who is African American and says she experienced discrimination growing up in a segregated Indiana, first noticed new immigrants arriving, she wasn't welcoming.

For her, a moment of truth came a little over a decade ago, after she made a casual remark to a colleague at the bank she managed. She asked him, “Why are these Mexicans here? Why are there so many of them?”

His response: “Don’t you know those are God’s children just like you are?”

Clark believes that is the day "God started working" on her heart.

Around that time, Clark spotted a business opportunity, connecting immigrants to the larger Indianapolis community. In the part of Indianapolis where she managed a bank, businesses were abandoning the area. But she noticed new deposits — from immigrants.

In 2005, Clark co-founded a non-profit to support local businesses called the International Marketplace Coalition. The organization, with public and private funding, worked to jumpstart ethnic businesses and market them through lunchtime tours and coupon deals.

Today, local politicians from both sides of the aisle declare the marketplace a success. Yet you might drive right by it. It looks like any strip mall in America, despite efforts to distinguish it with murals. But look closer and you will notice a mix of shops, from restaurants offering Greek, Turkish and Chinese food, to a Burmese market.

For Clark, who has never traveled outside the US, eating out for most of her life meant Olive Garden or McDonald’s. Yet she has taken to the new job and now raves about the chicken kebabs at the Yemeni restaurant. “To die for,” she says. 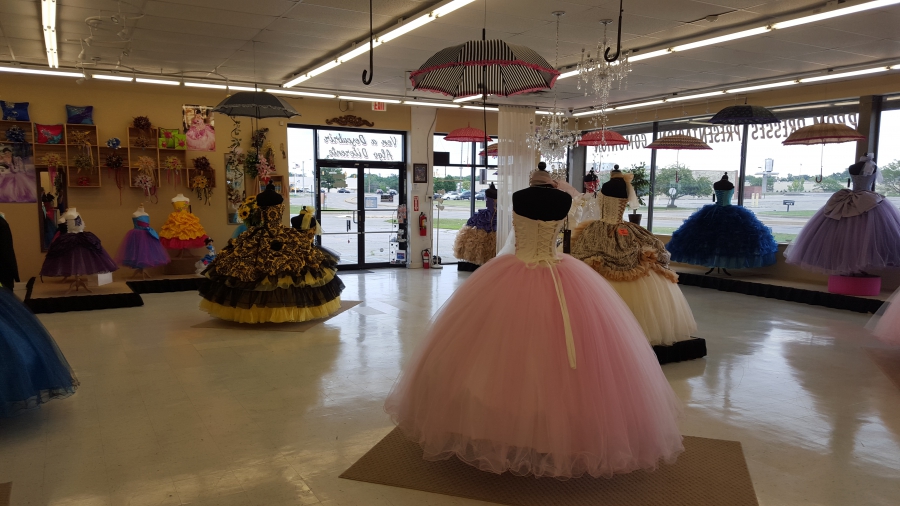 Maurel Boutique provides formal gowns and tuxedos for quinceañeras, weddings and communions. It is part of a row of flourishing businesses on the west side of Indianapolis.

On a recent Saturday, Clark checks in with a new Nigerian restaurant. Owner Tonia Aderonke-Wheeler says she was initially concerned about moving to Indiana because there would be few fellow immigrants. Instead, she found, “there are a lot of immigrants in Indianapolis. Makes me feel like I’m back at home. Like I’m back in Africa.”

For her business, though, she chose the International Marketplace to connect with different types of customers, not just fellow Africans. “I wanted to make sure that I include all the black Americans, just everybody,” she says.

Later, Clark stops by an Ethiopian restaurant, one of the first to open in the area. The air is thick with roasting coffee and, at first, only African immigrants are in the restaurant. But when Clark sees people of different backgrounds enter, she jumps out of her seat and tries to sell them on a new discount card she is offering for all of the shops here. “You can go to Guanajuato’s if you want some fresh meat,” she says. “If you go in there on a Thursday morning you can see them slice up that pig, and it’s a cool thing to see.”

Katy Souchet-Moura, an aide to a local Democratic member of Congress, appreciates the diversity here and, especially, the availability of food she could otherwise not find before. She especially likes plaintains. The marketplace, Souchet-Moura says, reflects a changing Indianapolis.

“I’m originally from Puerto Rico and we’re not considered immigrants,” she says. “But when we move from the island, we would go to New York, to Florida. My family came straight to Indiana. And while some people still look at us a little strange for that, we came for a reason. Indianapolis — it’s a cost-effective place to live, it’s a community place to live. My parents came here for a family environment,” she says.

After dinner, Clark makes a quick stop at a Mexican bakery. People talk about the US presidential election. The older Mexican woman behind the counter says that she does not feel like it's worth her trouble to vote. Clark, a strong support of Hillary Clinton, disagrees. “This year, unlike any other year, is so important,” she tells the woman. “We would like a United States where all people are welcome to live in.”