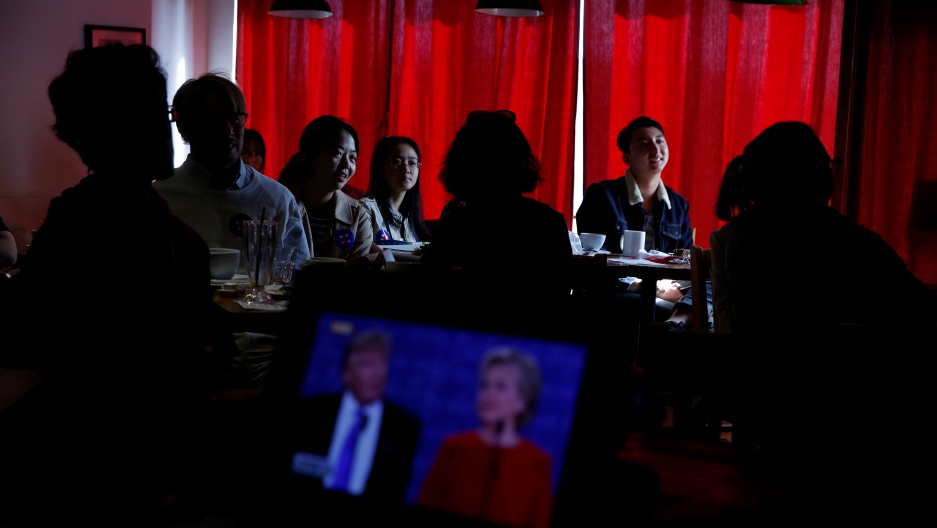 People watch a direct broadcast of the first U.S. presidential debate between Republican US presidential nominee Donald Trump and Democratic nominee Hillary Clinton at a cafe in Beijing, China, on September 27, 2016.

People in Asia would much prefer to see Hillary Clinton win the US presidential race this week, according to a new poll commissioned by the South China Morning Post.

More than three-quarters of the respondents in China, Japan, Indonesia, the Philippines, Singapore and South Korea picked Clinton over Donald Trump.

But the Chinese public seems to have a much more favorable view of Trump, where 39 percent of respondents said they wanted Trump to win.

Compared to the former US secretary of state and first lady, Trump is an relatively unknown figure in China.

“As such, Trump carries less baggage than we see elsewhere in Asia,” said David Black, a pollster at Blackbox Research, which helped conduct the survey put out by the South China Morning Post.

“The fact that he is essentially a businessman with no attachment to previous US administrations means that the Chinese are, for the moment, giving him the benefit of the doubt.”

So are many Chinese Americans, especially first generation immigrants. And there is a whole host of reasons why, according to Kaiser Kuo at SupChina.

For all the China-bashing he has done on the campaign trail, some of Trump’s proposed policies would actually benefit China, says Isaac Stone Fish, a senior fellow at the Asia Society’s Center on US-China Relations.

The GOP nominee has openly questioned longstanding US alliances with Japan and South Korea, for example.

“If, as Trump would like, we scaled those [alliances] down, that would be real boon to Beijing,” Stone Fish says, because it would suddenly provide China more influence in much of Asia.

Trump’s apparent lack of interest in human rights issues is something else the Chinese government would applaud.

“Those issues don’t play with him when he talks about China. They do for [Clinton], and Beijing really dislikes having to deal with human rights issues the way [Clinton] does,” Stone Fish says.

It might be counterintuitive, Stone Fish adds, but Trump’s proposal to slap big import taxes on goods coming into the US is another thing that could end up benefitting China as well.

“[This] would help Beijing move its economy away from [one] focused on export to an economy focused on domestic consumption, which many Chinese reformers would love,” he says.

All of this might lead one to think that the power brokers in Beijing are watching the US presidential race play out and rooting for Trump.

But when Stone Fish sat down to speak with some Chinese officials recently, he heard something different. Grudgingly, he says, the elites in Beijing want Hillary Clinton to capture the White House in Tuesday’s election.

“They realize that Trump would be such an unmitigated disaster for America and America’s place in the world,” Stone Fish says. “And that lack of stability globally would be bad for China as well.”

Trump has been a public relations bonanza for the Chinese Communist Party’s notion that American-style democracy leads straight to instability and chaos.

An editorial in the stridently pro-government Global Times earlier this year described the Republican frontrunner as "big-mouthed, anti-traditional, abusively forthright, [and] ... racist.”

Some in the Western news media, the Global Times editorial pointed out, had compared Trump to Benito Mussolini or Adolf Hitler. It went to say that, “Mussolini and Hitler came to power through elections, a heavy lesson for Western democracy.”

“You really can’t imagine ... a better gift to Chinese anti-democratic propaganda than Trump in the White House,” Stone Fish says. “But the paramount concern for China’s ruling Communist Party is domestic stability and having such an unpredictable ... strange element of chaos makes it more difficult for the Chinese Communist Party to govern.”

Trump often touts his record of cutting smart business deals. But one senior Chinese official that sat down with Stone Fish played down any concerns Beijing might have about Trump’s prowess as a tough negotiator.

“We can handle Trump,” the official told Stone Fish.

At the same time, Stone Fish says there is a feeling in Beijing that Clinton is hardly going to go easy on China.