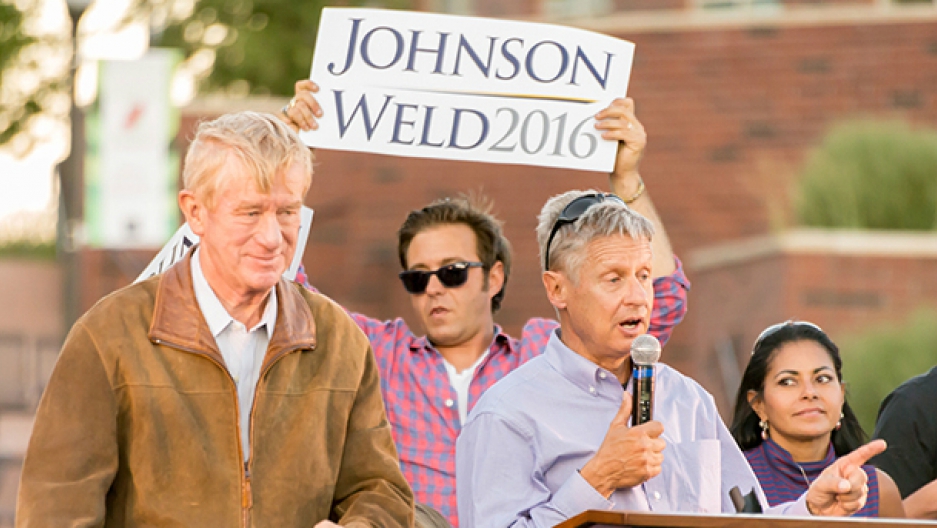 But they don't go as far as you might think.

The Libertarian platform has only 126 words dedicated to the environment, as opposed to pages of explanation from the other presidential candidates, points out Chip Knappenberger, assistant director for the study of science at the Cato Institute, so “it’s pretty much a hands-off approach. [Johnson] doesn't have a whole lot to say about it.” (The Cato Institute is a libertarian think tank, based in Washington, DC.)

As for how Libertarians might deal with water pollution, for example, Knappenberger says, “Libertarians are big on property rights and individual property rights. If someone is trampling upon your individual rights, you can litigate that. So, on issues like pollution, especially when you can identify someone who's causing the pollution and a harm that comes to you, they prefer that you litigate that with existing laws in the courts.”

Air pollution is much trickier for Libertarians to deal with, and there is no Libertarian stance on how to do that, Knappenberger says. “Various Libertarian scholars have different opinions about how to handle these more nebulous things like air pollution, where we all kind of contribute to it.”

Gary Johnson has said the Environmental Protection Agency “serves a useful role, especially in protecting water and certain types of air pollution,” Knappenberger says. “If you're emitting smoke out of your smokestack that's a particulate matter or something like that, you can put a scrubber on it and clean up those emissions. And the EPA's role in that is probably an essential one. ... The Republicans have put forth the idea that they would disband the EPA or really roll it back a lot, and I don't think he shares those views at all.”

Johnson and Weld want the free market to determine the best energy sources for the United States, Knappenberger says. They would like to do away with all energy subsidies, including for solar, wind and fossil fuels. “If you recognize that humans are causing climate change through carbon dioxide emissions, which they do, I think the solution to those emissions ... is technological innovation and adaptation,” he says.

Knappenberger believes that Johnson would not support President Barack Obama’s Clean Power Plan or the idea of carbon pricing. He would also likely “not be overly enthusiastic about the Paris climate agreement and would probably let things slide in terms of the commitments that we have to it," Knappenberger says. “I don't think he's against attempts to reduce emissions,” Knappenberger explains. “I think he's against heavy-handed, command-and-control federal policies to reduce emissions.”

Johnson raised some eyebrows recently when asked how he would address climate change. “In billions of years, the sun is going to actually grow and encompass the Earth, right? So global warming is in our future,” he said.

“When you look at the amount of money we are looking to spend on global warming — in the trillions — and look at the result, I just argue that the result is completely inconsequential to the money we would end up spending,” Johnson added.

Knappenberger notes that his own views on climate are a bit paradoxical. He is a climate scientist who works for a libertarian research center, founded by conservative billionaire industrialist Charles Koch. Knappenberger's views of climate science, he says, are summed up in the word “lukewarming,” which is the title of his recent book.

“Humans are impacting the climate through emissions of greenhouse gases — those emissions are having impacts, but those influences are not as large as advertised by some of the folks who are more activist in wanting to have government involved in energy and environmental issues,” he says.