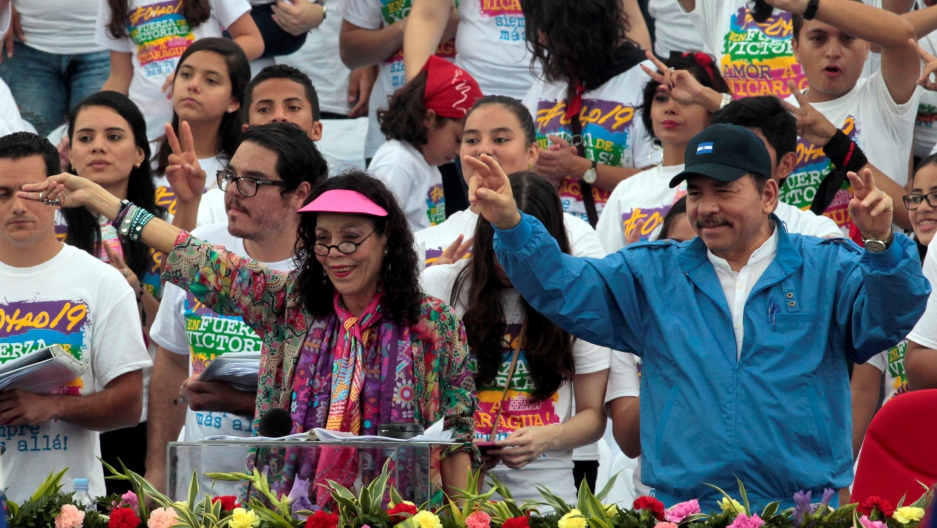 Nicaragua's President Daniel Ortega and first lady Rosario Murillo greet supporters during celebrations to mark the 37th anniversary of the Sandinista Revolution at the Juan Pablo II square in Managua, Nicaragua on July 19.

Nicaragua's President Daniel Ortega and his wife, Rosario Murillo, looked likely to win elections Sunday that would hand him a third straight term and cement her role as co-ruler.

Voting was taking place "in a calm and normal way" across the Central American nation of six million to select the president and lawmakers, the head of the Supreme Electoral Council, Roberto Rivas, told reporters.

Foreign observers were barred from monitoring the election, though some Organization of American States representatives and a couple of former presidents of Guatemala and Paraguay were invited to lend their presence to the vote.

Rivas defended the stance against monitors, saying that the legitimacy of Nicaragua's elections "comes from the people, not from any foreigner."

Polling was scheduled to close at 6 p.m., with results expected around five hours later.

The 70-year-old former Marxist rebel is wildly popular — especially with Nicaragua's poor who account for more than a third of the population — for social programs and economic stability and security that has promoted vibrant growth.

If he triumphs, it would be Ortega's fourth presidential mandate.

He has served two consecutive terms since 2007, and previously between 1985 and 1990, when his Sandinista National Liberation Front emerged victorious from a revolution that toppled a dictatorial dynasty.

Murillo, 65, already fills a prominent role as his government's spokeswoman.

With Ortega increasingly reluctant to make public appearances, she has stepped up — wearing trademark colorful dresses and ostentatious jewelry — to represent the administration.

She has also left her mark on the capital, ordering the erection of tall, metal "trees of life" that decorate the main boulevard in bright colors.

Many observers believe "La Companera" (the companion), as she is known, already shares decisions with Ortega and could become president herself if he bows out, or in the next elections.

"The practice of 'couples in power' is not exclusive to Nicaragua," Veronica Rueda Estrada, a Nicaragua expert and professor at Mexico's Quintana Roo University, told AFP by email.

She called to mind Cristina Kirchner, who succeeded her husband Nestor Kirchner as president of Argentina, and Hillary Clinton in the United States, who is vying to become president with Bill Clinton by her side.

But once the US vote is out of the way on Tuesday, attention would turn to how Nicaragua would face challenges, notably the evaporation of credit from its troubled ally Venezuela.

Looming economic problems could bode badly for some pharaonic projects Ortega has proposed, chief among them plans to build a cross-country canal to rival the one in Panama.

The opposition, already weak and fractured, has been progressively sidelined by Ortega and institutions such as the courts and electoral authority.

Parts of it have called the elections a "farce" and urged Nicaraguans not to vote, making voter turnout an important element in the result.

A poll by Nicaraguan survey firm M&R said Ortega had 70 percent support, and turnout was predicted at 75 percent.

A survey by the CID-Gallup consultancy in neighboring Costa Rica offered a more muted picture — 52 percent for Ortega, with turnout at 58 percent — but still a comfortable margin over rivals.