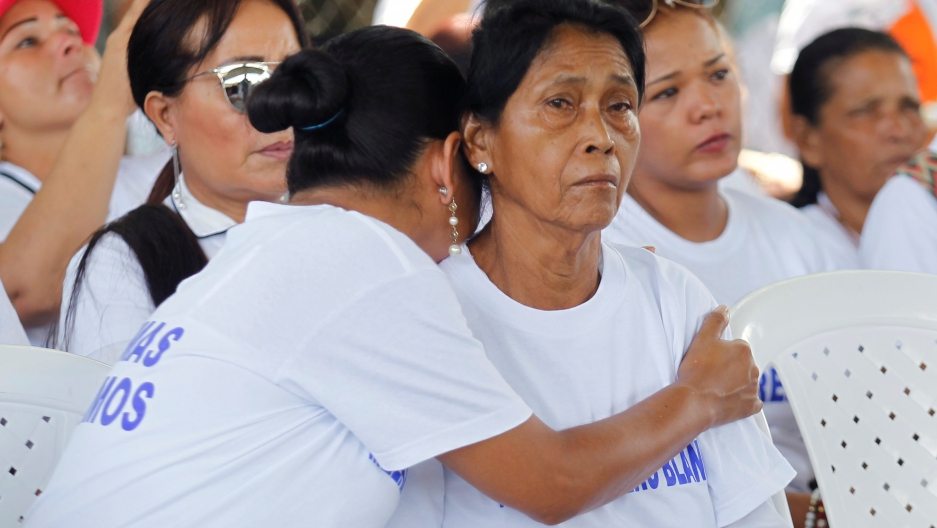 A woman cries during a meeting between FARC guerrilla leaders and victims of the La Chinita massacre, as members of FARC publicly apologize at the San Pedro Claver High School in Apartado, Colombia, September 30, 2016.

“Some women would ask me. Are you capable of setting off a bomb? And I would say, 'Yes, of course I am.' Because those people [the two sides in the Colombia-FARC conflict] ... did a lot of bad things. They can’t do it again. This has to end.”

She jokes about how she hated them all. And she had reason to. First, the paramilitary forces killed her son. Two years later, her father, a farmer, was killed in a confrontation between the army and left-wing guerrillas. That’s when she gathered what remained of her family, and came to the Amazonian city of Florencia.

It’s nighttime, and we’re sitting in her dimly lit kitchen. Her face glistens with sweat.

Flor Alba is one of the least scary people I’ve ever met. She is, on a basic level, a mom: She has a pouffy mom haircut, high-waisted mom jeans and she’s super worried about how I’m getting home later. Which is why, she figures, revenge would have been easy.

Most people in Florencia are like Flor Alba — they are not from here. They came down from the mountains and the jungle, escaping the violence. Once she made it, Flor Alba got help. She got counseling from the government, and she became friends with the local priest. One day, he came to her with a proposal that shocked her.

“He says to me, ‘would you like to dialogue with some victimizers?’” Flor Alba recalls. Former combatants. Perpetrators. Like the ones who killed her son and her father. “And I said, ‘oh no. Never. Don’t name them to me.’”

It was a program run by the Colombian government to help former enemies, combatants and victims, tell their stories to each other. The priest insisted and, eventually, Flor Alba changed her mind. Kind of. “One day I say to him, I’m gonna go. ... Oooh I felt something cold running all over my body, I felt those chills. I felt that when I got there, I was gonna throw something at them.”

She went to the meeting — but not in good faith.

To her dismay, when she got there, everyone was dressed in civilian clothes. She couldn’t tell who was who.

A young man was telling his story. “He had been kidnapped when he was 7 years old. The guerrilla took him, the FARC. And he would ask them, ‘why am I here? Where are my parents?’ And they told him not to worry about his parents. They would soon be joining him. They taught him to use a weapon. And he said, painfully, that the worst thing that had ever happened to him, was his first assignment,” Flor Alba recalls. “They sent him to kill someone. And he can never forget this murder. The man he was sent to kill asked him not to. He said ‘I’m someone’s father.’ And he filled with rage, because he himself wasn’t with his own family. And that rage helped him kill.”

That’s when she realized the man who was talking was a perpetrator. He was one of them. The subject of all her revenge fantasies. But it didn’t play out the way she had dreamed it.

“I listened and I felt a lot of pain. My heart was racing. I was judging him. And I started thinking this bastard, this son of a ... what if he’s the one who hurt me?" Flor Alba says. "But then I thought. What if he wasn’t him.”

She was speechless. She just walked away.

Flor Alba began to imagine forgiveness. That’s something many Colombians still cannot do, or don't want to do. They made that clear a few weeks ago when a majority voted against a peace deal between the government and the guerrillas. They thought it was too lenient.

“Fifty percent of Colombians were very angry about this. Fifty percent of Colombia wanted punishment,” says Father Rafael Narvaez. He knows a lot about anger. He grew up a poor kid in a coffee town. As a teenager, he used to play in a band with his little brother. Then one day his brother was gone. “He disappeared,” he says. “And later we learnt that he was in the FARC group.”

At age 18, a few months after his brother joined the guerrillas, Narvaez became a priest. He began working tirelessly as a mediator between the FARC, civilians and the government. But in 2001, he watched his work fall apart. He had been helping negotiate to end the war. One night, he watched his city burn: Angry protesters took to the street and set hundreds of cars on fire. He wondered what had gone wrong. After all, Colombia had flown in some of the world’s best conflict negotiators.

Narvaez says he had an epiphany. The process had not taken into account individuals.

He’s the founder of a institution that has become vital to the peace process: the Schools of Reconciliation and Forgiveness. He started with one, and the idea spread across the country. The program brings victims and former combatants together to sit down in the same room, and actually listen to each other, and contemplate how to forgive. And when he opened a school in the city of Florencia, Flor Alba was ready to help.

I go to a class in a tiny settlement in the mountains. Flor Alba is teaching. Everyone who lives here is an internal refugee. About 20 kids are gathered in a small shack. When I arrive, Flor Alba is passing around balloons. “On that balloon,” she instructs, “I want you to write down your name, the name of people you love, and your best and worst qualities.”

As the kids scribble, I speak to a young volunteer, Francie Quinones Valencia. She used to be a student here.

“Me? I have to — I had to forgive the FARC. They killed my father. That is why I enrolled in this school.” Actually, her grandmother enrolled her. Because when she was 9, Francie started telling her mother “One day I’m gonna grow up, and I’m going to get revenge.”

Francie says at first she was skeptical, but over several years, the school helped her get past her rage. So much so that she’s applying to college, to study psychology.

Back in class, there are the predictable balloon fart noises and giggles, but the kids take their assignment pretty seriously. The balloons are filled with scribbles. Flor Alba turns on some music and has them dance around to some cumbia music, and bounce them in the air.

The school, and others like it, is a success. Around 2 million people have enrolled in the program since its inception. It works closely with the Colombian government and receives support from the US Agency for International Development.

But as I watch them play, it strikes me that the students are mostly girls. In a way, that makes sense: Colombia’s war has affected women very specifically. An estimated 40 percent of rebel fighters are women. Tens of thousand of widows. Over 1,700 known victims of sexual violence. But where are the boys? Where are the men? Why are women the ones who have to forgive?

Read more: For some Colombian guerrilla fighters, the rebels offered an escape

Back in Flor Alba’s kitchen I have to ask the tough question: Did you really, honestly forgive them?

She says she has.

And then she adds, “I asked for forgiveness too. Do you know all the things I thought about doing? I wished them dead, and my hope was I could help tear them apart.”

She laughs raucously, amused at the rage that once consumed her.

It's getting really late — and turns out, it’s Flor Alba’s birthday. I scold her for not telling me this. Her two remaining sons arrive with their wives and her grandchildren. They’ve brought her a new baseball cap, and she puts it on, beaming.