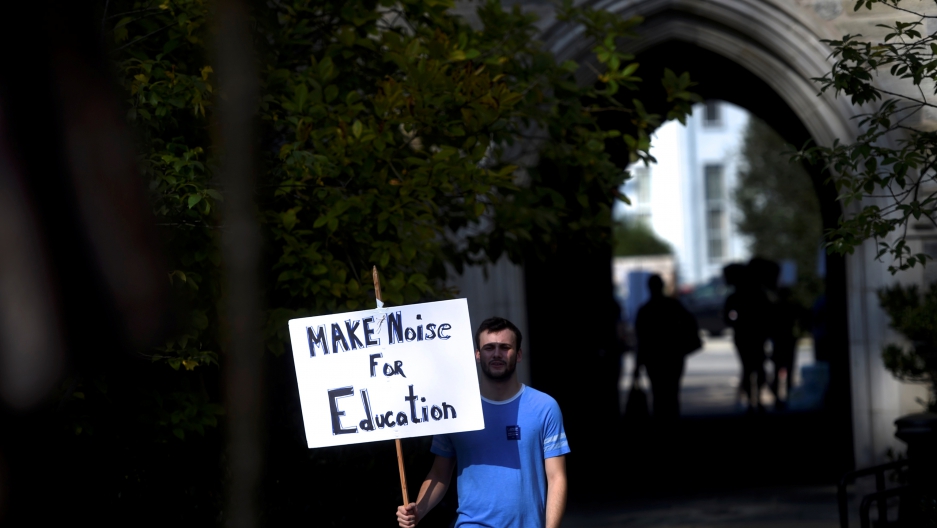 In the farmlands of southwest Pennsylvania you’ll find the town of Carlisle, a community of fewer than 20,000 residents.

Through the years, Carlisle has retained its old-time charm, according to life-long resident Dustin LeBlanc. LeBlanc, 32, says “when you drive along the downtown, it really still looks like it did back in the ‘20s or ‘30s.” The residents take great pride in their community, according to LeBlanc.

Carlisle is nestled in Cumberland County, which the American Communities Project classifies as a “College Town.” It’s one of 15 different ACP county types we’ve been profiling in the lead up to the 2016 election. Among the colleges in Cumberland County are Central Pennsylvania College, Dickinson College and the US Army War College.

Despite the large presence of college students in the area, LeBlanc says Carlisle is a “very conservative area” and “a religious stronghold.” Overall, the College Towns community type is not very diverse. According to the American Communities Project, about 85 percent of the population in American College Towns is white, and about 7 percent black and 7 percent Hispanic.

According to 2015 figures from the US Census Bureau, Cumberland County is 89.9 percent white, 4 percent black, and 3.6 percent Hispanic or Latino.

“The biggest things going on right now in Cumberland County and in our area deal with diversity and equality,” LeBlanc says.

While the area lacks racial and ethnic diversity, LeBlanc also says there are a number of challenges facing the LGBTQ community in the area. Recently, the Carlisle Borough Council announced a LGBT anti-discrimination ordinance.

“There’s still open acts of discrimination in housing, employment, and public services that you hear about or you read about on social media,” he says. “Pennsylvania is the only state in the Northeast that doesn’t have state legislation protecting LGBT people. About 24 or 25 communities have passed one in Pennsylvania, but we’re not one of them.”

But LeBlanc believes the tide is starting to change. His community even held a vigil for the 49 victims of the mass shooting at the Pulse nightclub, which catered to the LGBT community, in Orlando, Florida.

“For the first time in the next year, Caucasian students will not make up the majority of our school district,” LeBlanc says.  He describes this as a “cultural shift” and a “great learning opportunity.”

Though things are changing in the area, LeBlanc acknowledges that the community still has a long way to go.

Despite tensions, LeBlanc believes “there is hope on the horizon.”

“A lot of people are getting involved with the YWCA anti-racism campaigns,” he says. In his free time, LeBlanc serves as the executive artistic director of the Carlisle Theater Company, a community theater group. In this role he says he’s able to introduce at least some element of diversity to the young people in the Carlisle community.

“We have tried, in recent years, to program some shows that encourage diversity in casting,” LeBlanc says. “It’s so important for kids, young kids, trying to find their way, that when they look at that stage and they look at the people on it, they see someone they can relate to.”

LeBlanc hopes that in the years to come Carlisle, will continue to be accepting of all and that everybody can walk down the street “feeling as safe and as welcome as a young Caucasian male.”