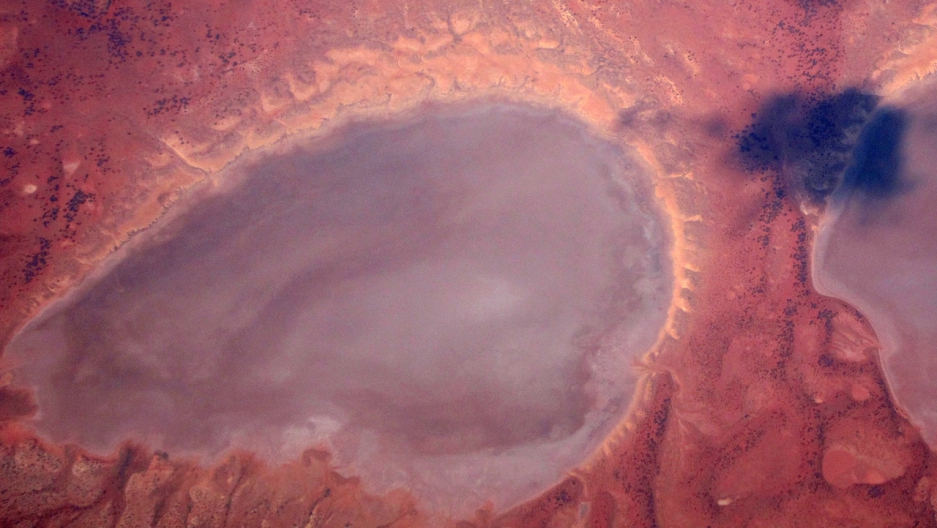 A cloud casts a shadow onto a dried-up lake located in outback Australia in this aerial picture taken on Dec. 13, 2015. Australia's extreme weather means farmers rely heavily on climate change forecasts to mitigate the impact of bushfires, cyclones and droughts.

China and the United States don’t need to go to war to destroy civilization as we know it.

They just need to keep pumping the skies full of carbon dioxide for 75 more years, slowly turning much of the planet into a wasteland.

Perhaps that’s why one top Chinese official is implying that one of America’s best-known climate change deniers — GOP nominee Donald Trump — is not leadership material.

China and America are the world’s two biggest emitters of climate-changing gases. For years, they’ve struggled to cooperate on preventing a global warming crisis.

But today, thanks to painstaking diplomacy, both agree to a global pact designed to limit the worst horrors of global warming. Whether the US upholds that pact, however, depends on choices Americans make next week on election day.

Asked how China would work with a potential Trump-led White House on global warming, Beijing’s top climate change negotiator said that a “wise political leader” would embrace policy in line with “global trends.”

“If they resist this trend, I don’t think they’ll win the support of their people,” Xie Zhenua told Reuters. “And their country’s economic and social progress will also be affected.”

Yes, as rebukes go, that’s rather dry. But any rebuke of a foreign political candidate is highly unusual from Chinese officialdom.

Chinese leaders are beholden to a policy of “non-interference” in overseas elections. They almost never take direct shots at Western politicians. For Trump, however, this official has made an exception.

He may be familiar with one of the Republican presidential candidate’s more bizarre conspiracy theories — that climate change is a “concept” created by China to sabotage American manufacturing.

The concept of global warming was created by and for the Chinese in order to make U.S. manufacturing non-competitive.

Trump has threatened to “cancel” the Paris Agreement on climate change. This is a United Nations pact, adopted by practically all the world’s nations, to limit global warming to two degrees Celsius above pre-industrial levels.

The stakes could not be higher. If unconstrained, human pollution is predicted to create a world four to six degrees warmer. In this nightmare scenario, much of the United States, Europe and Asia is transformed into a baking desert. Survivors are forced into the newly warmed-up arctic.

How terrifying is a "four-degree" world? The journal New Scientist predicts “alligators basking off the English coast; a vast Brazilian desert … and 90 percent of humanity vanished.”

Trump’s sneering at climate change is seemingly directed at voters who fear unemployment or ISIS more than environmental collapse.

Meanwhile, for much of China, pollution’s miseries are less of an abstraction. In Beijing, smoggy days turn the capital into a noxious sauna. Blowing your nose after a bad day in the city leaves the tissue black. Wealthy children attend schools with massive anti-pollution domes covering athletic fields.

Democratic candidate Hillary Clinton appears to recognize the stakes. She’s proposed the United States cut its emissions 30 percent by 2025. If elected, she has promised to invest billions in new job opportunities for Americans currently employed by the coal industry.

There is little hope for the planet’s ecosystem if China and America cling to the status quo.

China remains the world’s largest producer of greenhouse gases. The nation spews out nearly twice as much carbon dioxide as the US. But in recent years, after more than a decade of prodding, China’s officials have mounted a serious shift to renewable energy.

Their efforts have been remarkable. According to Bloomberg, China generates four times as much clean power as does the US. The nation has also expanded its solar capacity five times over in the last few years.

Moreover, China’s citizens aren’t nearly as ravenous when it comes to energy. The average American’s energy use is out of control — roughly three times as much as the typical Chinese citizen.

As China ascends, there are a worrying number of arenas in which Beijing’s Communist Party and the White House could clash.

China’s coastline is, after all, surrounded by US military bases. Its harsh treatment of dissidents and minorities is ceaselessly condemned by American lawmakers. Every four years, presidential candidates from both major US parties try to satiate voters by promising to get “tough on China.”

Yet these two powers seem increasingly simpatico when it comes to climate change. President Barack Obama says this environmental agreement between the two would-be rivals is “historic.”

Trump’s stated plan is to withdraw from the world’s biggest effort yet to ward off climate change. This may amount to campaign rhetoric.

But if he wins — and if he follows through on canceling the pact — his decision could prove historic for very different reasons.