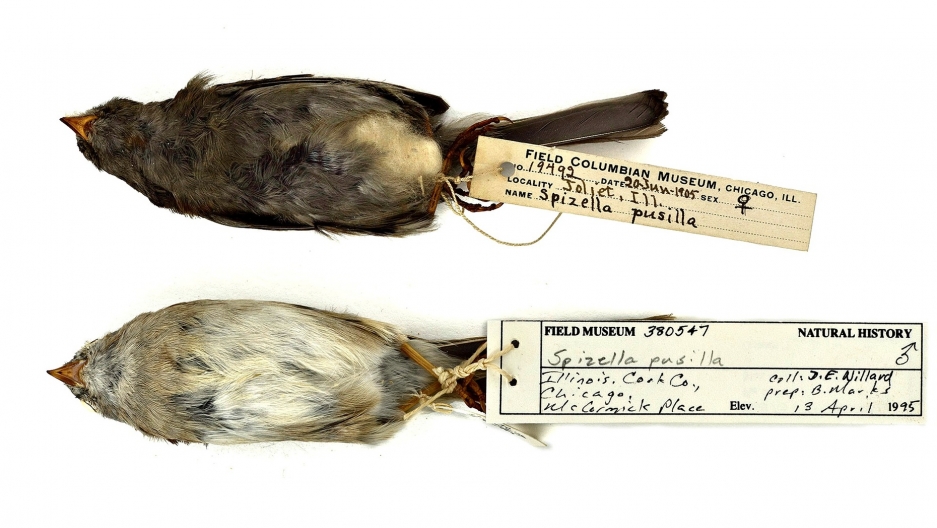 When artists and scientists collaborate, it's usually because an artist wants to make a piece of art inspired by some scientific concept. But in Chicago, an artist is helping a biologist uncover something about the climate.

Shane DuBayis an evolutionary biologist and Carl Fuldner is an art historian, both getting their PhDs at the University of Chicago. The twohave been photographing bird specimens at The Field Museumfrom the last century and a half --- and they noticed something strange: The feathers on the birds from a long time ago looked dirtier than newer specimens.

DuBay and Fuldner used software to analyze their photographs of the birds and figured out that dinginess of their plumage correlates to the changing amount of air pollution. Which suggests that during the age of impressionist painting, all those magnificent landscapes, the new coal-powered factories were making the air dirtier than ever before --- or since.

Kurt Andersen: How did you guys get together? People tend to stick to their own disciplines.

Carl Fuldner: I was researching an exhibition on early wildlife photography --- that would mean the early 1890s. I quickly learned that I didn't know much about birds. So I sought out Shane to see what he thought of these [photos], and it went from there.

So all these birds in your study are Midwestern birds?

Shane DuBay: We focused on Midwestern birds because of the historical importance of the area with burning soft and dirty coals, from Pittsburgh to Chicago. And the Field Museum has a great collection of modern birds from the region, so we're able to use these modern collections [and] historical collections. If you look at images of the sky from the late 1800s and early 1900s, the atmospheric soot was remarkable. That covered the landscape, and these birds acted kind of like filter paper, picking it up on their feathers and preserving it.

Now that you've used these birds to measure pollution over the last century and a half, is there anything else you can study using these photographs?

SD: A natural extension of our project is to look at evolution over 140 years and [see] if we could find signals of that in these specimens. Many of the birds have bright plumage patches that are used to attract a mate. If females of one species prefer really bright, large patches on the males of that species, what happens when you just kind of cover that?

Carl, working with a biologist, have you learned anything that would be useful for other art historians?

CF: This is an ongoing debate within art history, how much of a scientific approach should be brought to it as a humanistic discipline. But there are also some art-historical applications to this study. I looked back through some of John James Audubon's diaries when he was sketching birds. And the entry for one of our specimens, the downy woodpecker, he describes collecting some of these downy woodpeckers that were so dark and covered in soot that they looked like a different species. He confused them with another type of woodpecker because they were covered in soot.

Shane, working with an arty humanist, has that given you any thoughts about different ways you could conduct research?

SD: I've learned from him ways to approach inquiry --- reading anecdotes, historical accounts in the newspaper, and really getting a feel for what the society during these periods had to say about the environment.