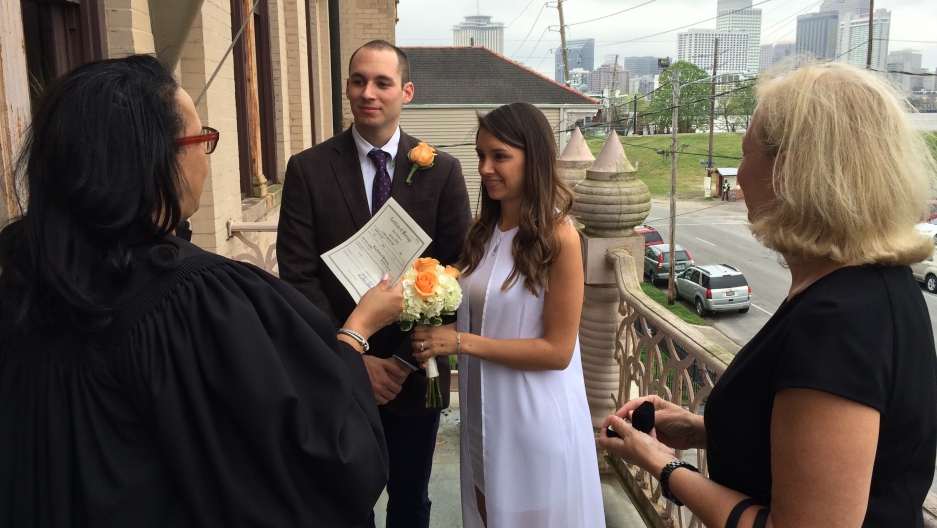 Ana Maria Lopez, born in Colombia, worried that a new law in Louisiana requiring an original birth certificate in order to get a marriage license would block her wedding. Eventually, a sympathetic City Hall clerk got her a waiver.

It’s the federal government’s job to regulate immigration. But recently some states have passed policies that critics say make life tough for immigrants and refugees. For example, the state of Texas recently tried to deny birth certificates to their US-born children. Now, Louisiana has passed a bill requiring people born outside of the US to show a birth certificate to get married.

That put Ana Maria Lopez in a bind.

She was born in Colombia but has lived in the US for 15 years. She is a citizen. One recent morning, Lopez went to downtown New Orleans to get her marriage license with her fiancé, Peter, also a US citizen. Excited, they arrived early at the Orleans Parish Marriage License Office and handed the clerk their paperwork.

The answer was still no: No birth certificate, no marriage license, no exceptions. Until this year, if you couldn’t provide a birth certificate, you could get a waiver from a judge. But a new law passed last year eliminated that option for people born outside the US.

That makes it tricky for a lot of immigrants who might have lost their birth certificate and cannot access another, or for those who come from a place that does not issue this type of document. Or, maybe they are a refugee who fled their country with just the clothes on their back. (The New Orleans area is home to over 15,000 people of Vietnamese origin, many of whom are refugees or descendants of refugees.)

Lopez eventually spoke to the clerk’s supervisor who, by chance, had a Colombian spouse and was familiar with the system there. The couple got their license. Lopez says she knows not everyone would be so lucky. “I’ve been here in the US for a long time, I’m fluent in English, I understand my rights. And I saw that what was going on in that office was a form of discrimination and it was unfair. So I was able to demand to speak to a supervisor. But this is not the situation for a lot of people," she says.

Louisiana State Representative Valarie Hodges sponsored the bill, arguing it would prevent marriage fraud, which she linked to terrorism. Hodges did not respond to interview requests. However, Debbie Hudnall, executive director of the Louisiana Clerks of Court Association, told a local paper that fraud was not a problem they were dealing with, and that Hodges had brought the bill to them, not the other way around.

Mary Yanik, an attorney with the New Orleans Workers’ Center for Racial Justice, says the bill is part of a broader effort to create a hostile environment for immigrants. “It’s an attack on immigrant families and their ability to build community in Louisiana," Yanik says. "That is a part of marriage is building their relationships here.”

Yanik says that the law is morally wrong and unconstitutional. Her group is now fighting it in court, alongside the National Immigration Law Center. Alvaro Huerta, an attorney at the center, says his organization is challenging the law on three fronts. The first is on the fundamental right to marry, which the Supreme Court recognized last year in its same-sex marriage ruling. The second is based on discriminating people based on their national origin, a protected class. “Denying the right of some people to marry simply because of where they were born I think is un-American and absurd,” says Yanik.

Finally, Huerta says that even if the law does prevent marriage fraud, it is the federal government’s problem, not Louisiana’s.

This is not the first time US legislation has blocked marriages involving immigrants. Mae Ngai, a historian at Columbia University, points to the Chinese Exclusion Act of 1882, which barred Chinese workers from entering the US, and also prevented those already here from bringing their spouses to the US.

Ngai also points to the Expatriation Act of 1907. That forced women who married a foreigner to renounce their US citizenship. She says bills like Louisiana’s that appear to target immigrants are not new. “You know the targets changed depending on who’s perceived to be the threat,” she says. “Some of this is people trying to stop history, trying to stop communities from growing that grow naturally.”

Rep. Hodges says she never meant for the law to affect people who are here legally. She now plans to tweak the bill so it won’t.

But those suing point to a federal court ruling that protects the fundamental right to marry regardless of immigration status. They say the whole law needs to be scrapped.