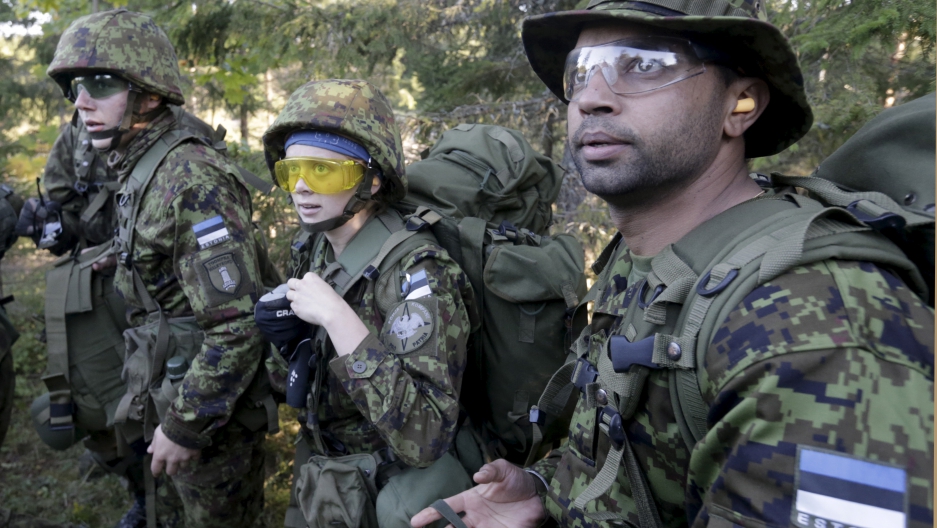 Nearly every weekend in the tiny Baltic nation of Estonia, folks are out playing war games in the woods. It’s fun. But it’s also a deadly, serious business.

The games are called "patrol competitions," and participants score points by completing tasks — all of which would be useful against an invading Russian army.

The Estonian Defense League, as it’s known, is the subject of a story in the New York Times this week by Moscow correspondent Andrew Kramer.

The league is kind of like the National Guard. Only it’s very different in what it’s training its members to do.

It’s training its members to be able to wage a guerrilla insurgency against any attempt by Russia to occupy the country.

It’s wildly popular. The Estonian Defense League is expanding rapidly. It currently has an estimated 25,000 volunteers, who all have their weapons oiled and ready, hidden at home or in the woods. That’s a big chunk of the population. Proportionately, that would translate to 6 million Americans.

Besides marksmanship, and stripping and cleaning rifles, the skills that are being tested include relatively benign things like horse-riding, first aid, and identifying and using medicinal herbs found in the forest. But it also includes more obvious military skills like identifying different types of Russian armored vehicles and making and deploying improvised explosive devices.

“In these games,” says Kramer, “volunteers — these are men, women and teenagers — compete in 24-hour competitions in the various skills that would be needed for an insurgent.”

“They also have something they call 'life cards,' which they carry with them, and they have the ‘occupying army’ ... hunting for them in the forest, firing guns, shouting, stomping around. And if they capture a team, the team members have to hand over their life cards, and this detracts points from their score.”

Each person gets 12 life cards, “unlike in real life,” quips Kramer.

Estonia is a tiny country, the size of Massachusetts and New Hampshire combined. It’s flat, so there are no real natural defenses, and there’s a 200-mile border with Russia. Like in Ukraine, there’s a disgruntled ethnic Russian minority. And there’s a long history of Russian and Soviet control and oppression.

But there’s also a long history of violent resistance to Russian occupation.

Estonia is a full member of NATO, and so has NATO’s guarantee that every other member, including the United States, would come to its defense.

One volunteer told Kramer that “our job is to defend our country until our allies come, if they come.”

Kramer says some people in Estonia have little confidence in outside help.

“They don’t really believe,” explains Kramer “that the president of the United States, for example, would risk nuclear war with Russia to defend their little town in Estonia.”

He says these doubts were amplified after Republican candidate Donald Trump said that, if elected, he would not automatically come to the assistance of an ally under attack.

“I met one volunteer in this group,” says Kramer, “and during a break in the competition he was oiling his machine gun and talking about Trump. And he said something to the effect that he believed Trump was crazy and irresponsible. And so he was taking matters into his own hands — by keeping his gun oiled.”