This is a portrait of Tchaikovsky by Nikolai Kuznetsov.

Pyotr Illyich Tchaikovsky's famed "1812 Overture" was first performed outdoors, at the base of the majestic Cathedral of Christ the Savior in Moscow. His beloved ballet, "The Nutcracker," was introduced to the world at the Imperial Mariinsky Theatre in St. Petersburg. But his Piano Concerto No. 1? Its debut came in — of all places — a concert hall off Tremont Street in Boston, six years before the Boston Symphony Orchestra even existed.

If you are a classical music listener, the experts say you know Tchaikovsky's Piano Concerto No. 1 the moment you hear it.

"[Then] the piano comes in with this accompaniment of these crashing chords," said world-renowned pianist Marc-André Hamelin, who has played the concerto a number of times in concert. 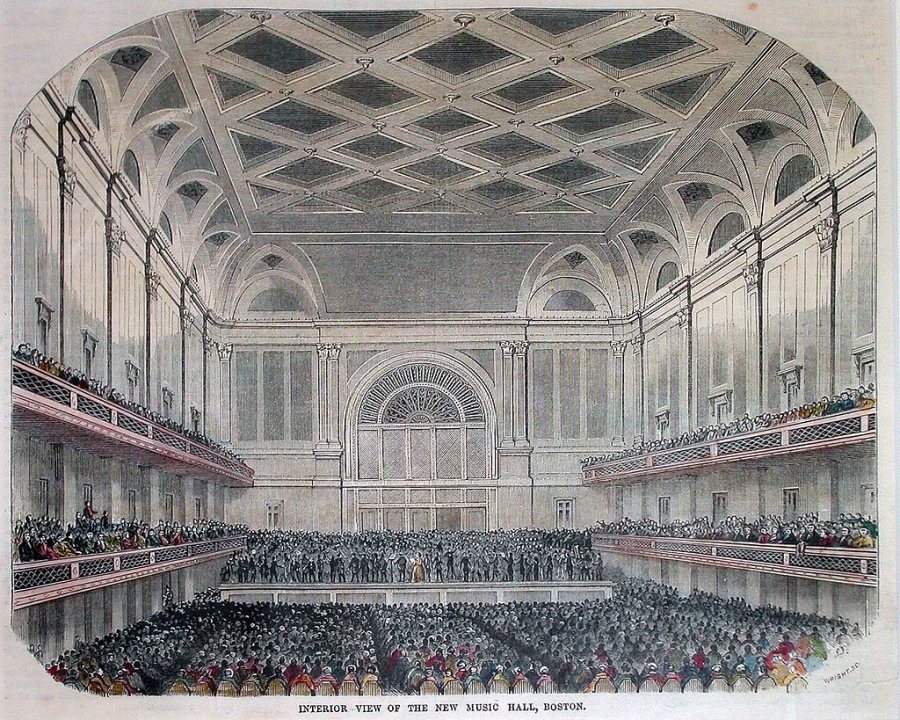 This is an 1852 illustration of the interior of the Boston Music Hall.

Hamelin said that with this concerto, as with much of Tchaikovsky's work, it's evident that he was pretty darn good at what he did.

That may be the consensus today, but in Tchaikovsky's day, he was but just one of many greats in a 19th-century Russia teeming with them. One who sometimes found himself at odds with his contemporaries.

Other Russian composers were “owning Russianness," McCreath said. "And he wasn’t really. He had a more cosmopolitan, Western view of music — or voice in music."

Perhaps that helps explain what happened in 1875, when Tchaikovsky first ran his new piece by a respected old friend.

"And, in fact, that’s part of the story of this concerto," McCreath said. "The first guy he’s thinking of for it says, 'This is unplayable. What are you talking about? I don’t even understand what you’re trying to do.'”

Rubinstein’s assessment did not exactly sit well with Tchaikovsky.

Instead, Tchaikovsky would change pianists. He found a willing partner in Hans von Bülow, a German virtuoso whose career had been derailed when he lost his wife — Franz Liszt’s daughter, Cosima — to one of his musical idols, composer Richard Wagner.

"He’s sort of this guy who’s sort of rebuilding his life," McCreath said. "He sees Tchaikovsky’s music and he plays it through himself, and he’s like, 'This is something special.'"

That Bülow took up the cause set the concerto on its unlikely path to the Bay State. Bülow had a US tour previously scheduled, and decided to unveil the piece in Boston — a city that McCreath says was eager to demonstrate that it was exactly the kind of place that would debut a new work by a great composer.

"It’s 'high culture' — intentionally high culture,” McCreath explained. "This is the United States trying to establish itself while having an inferiority complex. And so, therefore, imitating what’s going on in Europe."

"With an apparently terrible orchestra, by the way," McCreath said. "They got through it. But it was doubtless not a great representation of what Tchaikovsky really had in mind. It takes a while for a piece to really get its legs."

But get its legs, the concerto did.

"Bülow stuck with it," McCreath said. "He kept it on tour, and he played in London not long afterwards, and it kind of took off. It kind of was one of Tchaikovsky’s real triumphs."

Hear from Marc-André Hamelin on a surprising aspect of Tchaikovsky's Piano Concerto No. 1:

Hamelin says it’s not Tchaikovsky’s most masterful work. McCreath says it’s not his most groundbreaking. And with countless "Nutcracker" productions about to descend on cities large and small as the holiday season gears up, we all know it’s not his most famous. But it is — today — an indispensable part of the classical music canon and the legacy of one of the art form’s true greats.

"It’s one of these pieces that, to me, seems like it’s always been there," Hamelin said. "One simply cannot imagine that it didn’t always exist. It’s so fine, so true, so wonderful. It will never die."

This story originally ran on our partner site WGBH.org.