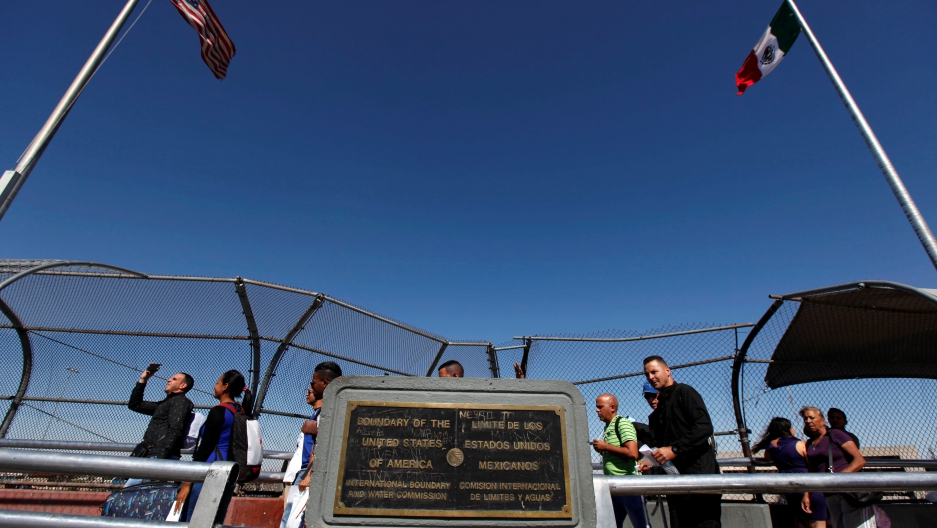 Cuban migrants cross the border into El Paso, Texas, after arriving on a plane from Panama to Mexico, in Ciudad Juarez, May 9, 2016.

Christina Garcia has lived in El Paso, Texas, all of her life.

Garcia, 33, is a first generation US citizen and currently works as the crime victim program coordinator for Las Americas Immigration Advocacy Center. While immigration has been top of mind this election season, she says that many misunderstand what life is truly like along the border.

El Paso borders the Mexican state of Chihuahua — it’s considered a “Hispanic Center” by the American Communities Project — just one of 15 different community types we are profiling in the lead up to the 2016 election.

About 11.5 million people live in counties considered to be “Hispanic Centers” — they’re categorized this way due to the large number of Hispanics that live in the area. According to the US Census Bureau, 81.3 percent of people in El Paso County identify as Hispanic or Latino.

“As a person from the border, I have learned to be able to appreciate how important the border situation is, and how it reflects so differently from what people experience away from the border,” she says. “On a professional level, I’m very frustrated with how the border is completely disconnected from people who have never been in the border.”

While GOP Presidential Candidate Donald Trump questions the effectiveness of US border security controls, Garcia has a different experience.

“We’ve had a border fence for many years now, and we’ve had sensors and helicopters that cruise on a daily basis, and drones and all of these different type of things being used to prevent illegal immigration entries,” she says. “But we continue to hear this rhetoric about ‘securing the border’ and ‘more border enforcement’ when I feel like our border is extremely secure. We are one of the safest cities in the country.”

Though Garcia is concerned about the “militarization of our border,” which she says began back in the 1990s and escalated after 9/11, she acknowledges that many in her community have been touched by drug-related violence in Ciudad Juarez, across the border.

“Everybody that has lived in El Paso for the last eight to five years really has either been directly affected by the drug war in Mexico, or indirectly,” she says. “Everybody knows someone who was maybe murdered or kidnapped or that was extorted or who simply decided to leave Mexico and come to El Paso for a better future”

Thousands in the area live a “binational” life, with many people working, living or attending school on opposite sides of the border.

“A lot of people have tourist visas and they commute on a daily basis,” says Garcia. “We are definitely a one-border community, regardless of [the fact that] we’re two different countries, and three different states with a border fence. We function dependent of each other.”

Though Garcia is frustrated with the overall immigration and asylum process — she believes border patrol agents have too much discretion to detain people who may, for example, be seeking asylum — she is concerned about policies that may affect immigration and economic patterns in El Paso and Ciudad Juarez.

“The textile industry was really big in the El Paso area for most of my life until probably the later 1990s,” she says. “I feel that was directly impacted by NAFTA.”

NAFTA, the North American Free Trade Agreement signed by President Bill Clinton in 1993,  opened up trade between the US, Mexico and Canada. Most El Paso locals know someone who was connected to the textile industry, Garcia says, but many of those jobs are now gone.

“When I was in high school, we started to see the effects of NAFTA, but through the Mexican side,” she says. “All of these textile industries, most of them moved to Mexico for cheaper labor and we started to see a higher spike in crime in Mexico.”

“We see the effects still because of NAFTA. As a border we’re still seeing the bridges that are swamped with these big [tractor] trailers that are crossing on a daily basis and swamping our highways and our ports of entry. But we’re not seeing a lot of those financial impacts in a positive way.”

Garcia says she’s extremely concerned about the proposed Trans-Pacific Partnership (TPP), which both Trump and former Secretary of State Hillary Clinton oppose. Like NAFTA, the TPP is a multinational agreement that tears down trade barriers in hopes of fostering economic growth.

“I think [the TPP] is definitely going to hit our community,” Garcia says. “It’s definitely going to affect our border sister city of Ciudad Juarez. And the sad part about that is some of our politicians are actually for TPP, so they’re not fully representing their constituents — they’re mainly representing those who have business motives or agendas.”

The AFL-CIO, one of America’s largest labor unions, has warned against the TPP.

“If the TPP is approved, it will double down on the failed policies of the past by favoring exports based on poverty-level employment and the everyday denial of workers' rights in Mexico, destroying even more good jobs in the United States than the hundreds of thousands that already have been eliminated,” the union writes. The Obama Administration argues that the deal will support jobs at home.

Clinton supported NAFTA as first lady, yet she’s now against the TPP. Trump supports building a massive border wall along the US-Mexico border, and is for extremely strict immigration policies. So where does that leave Garcia ahead of the election?

“I’m in a very difficult situation with who I’m going to choose as a candidate,” she says. “I’m not considering the two main candidates, that’s for sure.”

This story was first published by The Takeaway. See more of their stories from the series, Portrait of An American Voter