Pamela Geller is one 15 names included on the Southern Poverty Law Center’s new “Field Guide to Anti-Muslim Extremists,” where she is described as, “probably the best known — and the most unhinged — anti-Muslim ideologue in the United States.” Geller is shown here speaking in Garland, Texas on May 3, 2015.

American Muslims are under attack.

“They have been vilified as murderers, accused of conspiring to take over the United States and impose Shariah religious law, described as enemies of women and subjected to hundreds of violent hate crime attacks,” states the Southern Poverty Law Center in a new online publication called, “Field Guide to Anti-Muslim Extremists.”

“Fueling this hatred has been the propaganda, the vast majority of it completely baseless, produced and popularized by a network of anti-Muslim extremists and their enablers,” the SPLC report says.

And then the prominent hate group watchdog names names, 15 of them in all — people it sees as the worst offenders.

Pamela Geller is on the list. She is described as “probably the best known — and the most unhinged — anti-Muslim ideologue in the United States. She is the movement’s most visible and flamboyant figurehead and a woman who is relentlessly shrill and coarse in her denunciations of Islam.”

Geller got a lot of attention in 2010 when she led the charge against the construction of an Islamic center in Lower Manhattan.

The list is primarily meant to be a resource for journalists, says Mark Potok, a senior fellow with the SPLC. He says it is especially intended to help producers who schedule experts for TV appearances.

“There are an awful lot of people out there who present themselves as ‘experts’ on terrorism or on Islam, who really are people who make it their business simply to savage Islam,” Potok says.

But a couple of the names on the SPLC’s list have raised some eyebrows.

One of them is Maajid Nawaz.

I disagree with @maajidnawaz on a lot of things but to include him as an "anti-Muslim extremist" is beyond absurd: https://t.co/7YsdzkJMMC

Nawaz is a British Muslim and a self-declared ex-jihadist. He is a writer and activist, far better known in Britain than the US, and the co-founder of a think tank in London called Quilliam, which describes its mission as countering the narratives put out by Islamist extremists.

But the SPLC describes Nawaz as a self-promoting hypocrite. And worst of all, the SPLC’s Potok says, is that Nawaz has accused peaceful Muslim organizations of being connected somehow to extremist groups.

“We think that Nawaz is very wrongheaded and under the appearance of only attacking radical Islam, in fact, is attacking Islam in general,” Potok says.

Nawaz has his defenders, though. They say his voice is exactly what is needed to stand up for Muslims and confront the real Muslim extremists.

“Maajid Nawaz ... is a liberal in the greatest sense of the term,” says James Kirchick, a fellow at the Foreign Policy Initiative, a conservative think-tank in Washington. Kirchick is also a correspondent for the Daily Beast. 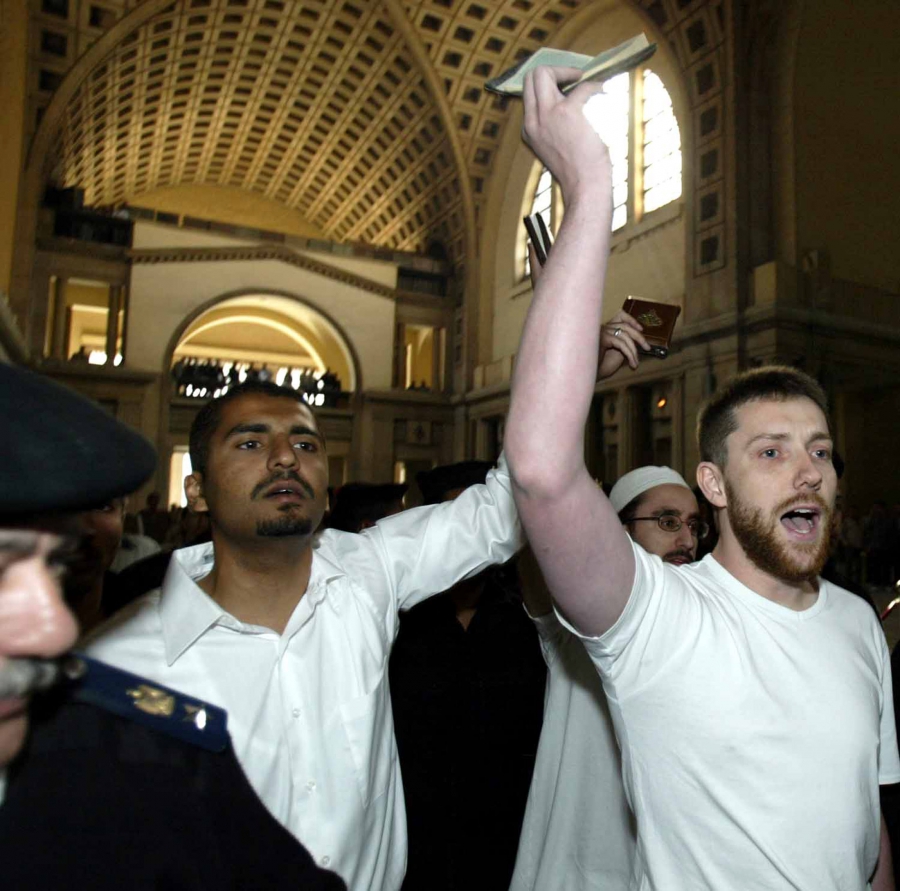 Maajid Nawaz (left) and fellow British citizen Ian Nisbet hold up copies of the holy Quran as they are led to court in Cairo, Egypt in March 2004. Nawaz and Nisbet were among a group of 26 people arrested in Egypt and sentenced to jail time for promoting the goals of an illegal Islamist group.

Kirchick says Nawaz “believes in individual rights and freedom, and he believes in a liberal interpretation of Islam than condemns terrorism, that respects the human rights of all people, including nonbelievers or ex-believers.”

“He’s one of the strongest voices for liberalism within Islam,” Kirchick says.

Another name on the SPLC’s list that Kirchick and others take issue with is Ayaan Hirsi Ali, a Somali-born former Muslim who has been unreserved in her criticism of Islam.

Kirchick says putting out lists of names like this one is really a distraction.

“We should really be focusing on who is threatening people’s lives with violence,” Kirchick adds. “It’s not [Geller, Ali and Nawaz]. It’s Islamic extremists.”

Nawaz accuses the SPLC of putting his life in greater danger.

1st world American non-Muslims at @splcenter listed me, a liberal reform Muslim, as an "anti-Muslim Extremist". This is a target on my head.

In a robust self-defense in the Daily Beast, Nawaz writes that, “Nothing good ever comes from compiling lists.” And he accuses the SPLC of engaging in McCarthyist tactics.

But Omid Safi is not buying it. Safi is the director of the Islamic Studies Center at Duke University.

“Someone like Maajid Nawaz is ... a very complicated person,” Safi says. “It’s not so much that Maajid Nawaz hates Islam or that he hates all Muslims.

Nawaz was widely criticized for a private 2010 memo he sent to the British government, in which he named several prominent British Muslim groups as sharing the ideology of extremists. Critics say this kind of thing has the effect of casting suspicion on Muslims in general.

But Nawaz argues that he is opposed to ethnic and religious profiling. And he says he is standing up to Islamist extremism by calling for liberal reform from within the Muslim community.

The editorial page of the Wall Street Journal has come out in support of Nawaz and Ali, calling both of them Muslim reformers. There is also a Change.org petition calling for both of their names to be removed from the SPLC's list.

But the SPLC says it has no plans to make any changes to its list of anti-Muslim extremists.