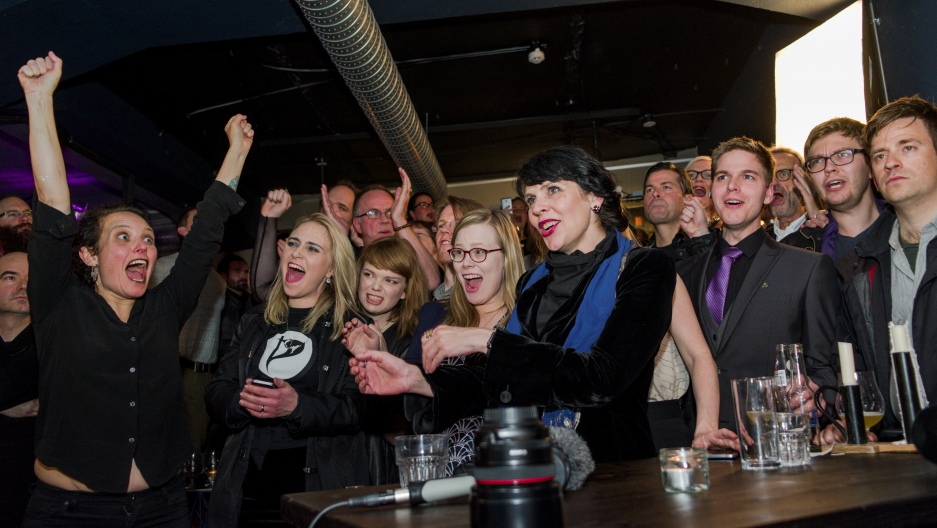 Birgitta Jonsdottir of the Pirate Party reacts alongside party members after early results of the parliamentary elections in Iceland on Oct. 29, 2016.

With Hillary Clinton maintaining a highly variable lead over Donald Trump, attention has started to shift to what a Clinton presidency may look like.

Many believe her presidency would be a boost for women's rights movements in the US and worldwide. As secretary of state, she championed advancing gender equality through US foreign policy. But, in looking at the numbers, the dollars don't always match the rhetoric.

The US has been far behind other high-income developed nations in terms of providing foreign aid that supports gender equality and women's empowerment to developing nations.

The US is a member of the Organisation for Economic Co-operation and Development (OECD), an organization of mostly high-income developed countries. The OECD's Development Assistance Committee (DAC) tracks development aid from members to developing countries.

Donor countries are required to report whether their aid promotes gender equality and women's empowerment and whether that is a central part of the aid. The US is ranked second in terms of total aid targeting gender equality from 2002 to 2014, just after Germany, though US data is incomplete. Most US aid from before 2011 has not been categorized as to whether it is for a gender-equality purpose.

However, this doesn't mean the US has placed gender equality high in its foreign policy priorities — it's a reflection of how much foreign aid the US provides.

If we look more closely at the portion of aid allocated for gender equality, the US is far behind other OECD members. Less than 20 percent of US aid is gender-focused.

There may be a very simple reason, however, for why.

In the 10 countries that appropriate the most aid for gender equalty, female legislators make up at least a quarter of their national legislative bodies. For Iceland, Sweden and Finland, women's representation exceeds 40 percent.

The US? Just 19.4 percent of those elected to Congress are women.

The portion of US aid targeting gender equality has barely budged since 2011, according to the data.

That's in keeping with a broader OECD trend, which saw the portion of aid targeting gender equalty increasing slightly.

Despite the slow growth in portion, the absolute amount of aid supporting gender equality has increased significantly — from $11 billion in 2002 to $37 billion in 2014.