FARC rebels pose with an unidentified girl holding a weapon in southern Colombia in this undated photo confiscated by the Colombian police and released to the media on November 12, 2009. Police said that the photo was found on the body of a rebel killed in a combat against them.

At the bottom of a cement glen, by the banks of the canal, there’s a tiny store that sells green plantains, cola and cigarettes. But they are out of plantains.

The woman who tends the store, who goes by Xiomara, often has to fight the urge to run away. She compares the desire to escape to something taking over her body.

“I’ll be fine and then from one minute to the next, I want to get out," Xiomara says. "I just want to go. I want out. I need to leave.”

When she gets this way she lights up a smoke and maybe watches some TV.

Up until recently, Xiomara was a guerrilla combatant, for the Revolutionary Armed Forces of Colombia, or FARC. She fought in what is the longest active war on this side of the planet — for 52 years the Marxist FARC rebels have clashed with the government. The conflict left 260,000 dead, terrorizing Colombians for years with forced displacements, kidnappings, gruesome torture and disappearances.

Earlier in October, a slim majority of Colombians rejected a peace deal that had been negotiated over the last several years. Both sides are back at the negotiating table now, and there is a temporary ceasefire.

Women played a central role in the peace process, and Colombia was praised around the world for its groundbreaking inclusion of the needs and concerns of women. The peace accord promised to create a gender subcommittee to investigate war crimes of a sexual nature, it promoted land rights of peasant women and the negotiations put the voices of female victims front and center.

However, many women still rejected the deal. Some said they wanted harsher punishments for guerrilla members. Others feared it would give Marxist rebels too broad a role in the government.

Should they manage a new peace accord, the government will have to figure out how to better serve women like Xiomara: There are over 17,000 active guerrilla fighters, and an estimated 40 percent are women. And they have an especially harrowing time returning to civilian life.

Xiomara’s store is in the city of Florencia, at the edge of the Colombian Amazon, in a neighborhood where thousands of families are squatting, displaced by the armed conflict. In between customers, she reminisces about when she first became a militant.

She was 14. She didn’t tell her friends or her family that she was leaving.

“Ever since I was a little girl, I loved guns. I figured I would join the police, or the army. But to join them you have to study, and I was really poor. So the easiest thing was … the guerrillas. It didn’t require you to study,” she says.

People join the FARC for different reasons. Some are forced in. Many join for social justice causes. Others, like Xiomara, just want adventure. The excitement and respectability brought upon by weapons is no small thing for a woman in a profoundly sexist society.

“The FARC espoused a rhetoric of gender equality,” explains Kimberly Theidon, a professor at Tufts university. She teaches international humanitarian studies, and has worked in Colombia extensively.

Theidon says, for all the FARC's promises, women in it had it pretty rough: “You hear about the forced abortions, forced contraception and being forced to sleep with people that you didn’t necessarily want to. Giving up babies that you wished you could raise.”

Xiomara stiffens when I ask if she was ever scared out there. “Well it’s a hard life, I’m not going to tell you it’s all happiness and celebration. No. I was scared,” she says.

She generally speaks in a small voice, so it’s a bit jarring when it becomes a general’s bark. “You know at any moment a bullet can hit you, and kill you. That’s scary. But look, you learn. I’m telling you, you get used to it. You get used to it and you learn.” 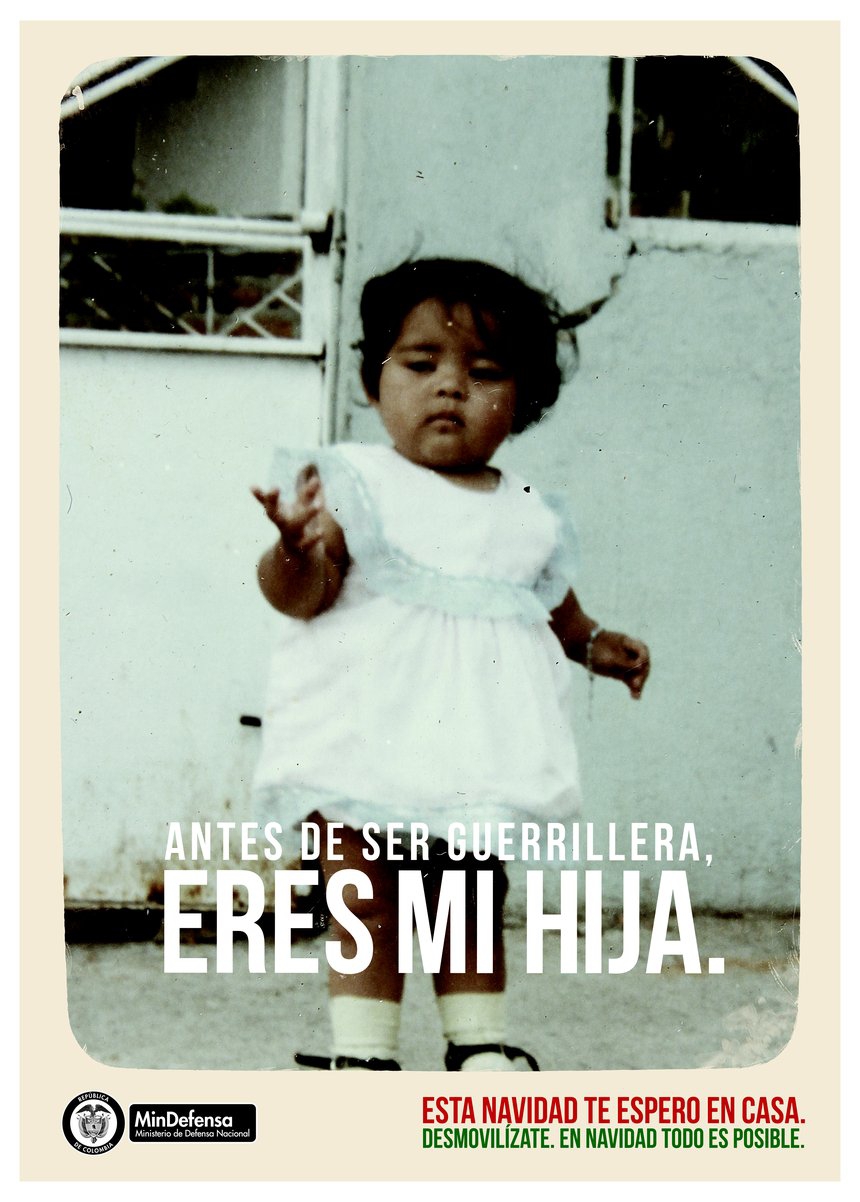 She loved it. Xiomara stayed with the FARC for 15 years. She moved throughout Colombia, mountains and jungle. Until she started getting sick.

She blames the birth control the rebel doctors gave her. She says the hormones made her really ill. It got so bad the guerrillas discharged her. “They told me I was no longer of use. And I no longer could do it anyways. It was as far as I could go,” she says.

She left the wilderness, and went home to figure out her next move. And that was terrifying. “I was scared of going outside. Very scared. I’m not going to lie, I still am. I’m not scared of getting hurt. I just don’t feel at ease. Because it’s like I became a little mountain animal.”

Fighters like Xiomara are supposed to contact authorities when they leave the FARC. But she didn’t tell anyone she was back. A neighbor reported her. The army came to check her for weapons. That’s when she enrolled in an official reintegration process, run by the Colombian government, with support from the US.

About 48,000 militants have enrolled in the program in the last 12 years. It starts off with a halfway house. There’s a stipend in exchange for continuing your education, or learning a trade. And a lot of counseling. Often for things you and I take for granted, like how to get around on public transportation or book a doctor’s appointment.

Monica Monje is a psychologist assigned to work with Xiomara. She tells me Xiomara’s struggle is far bigger than how to run an errand. Xiomara is not sure how to be a woman in Colombia.

It’s strange to hear Xiomara talk about it: she’s curvaceous, stunningly attractive. She exudes a hypnotic confidence. But she tells me, almost flabbergasted with herself, that despite being a woman, she loves physical labor, and the great outdoors.

“The truth? You want me to tell you the honest truth?” Xiomara pauses. “I miss that life. That’s the truth. Look, because in that life ... you are always on the move. You are always exercising. Your body is always moving. And also you’re surround by so many people. It’s like family.”

Colombian society is still deeply gendered. Leaving the house, getting dirty, doing manual labor — those are considered unfeminine. Xiomara feels the change in her body — still strong from hiking around the country with a weapon, but growing soft from sitting around the store. This is one of the big challenges of reintegrating female rebels back into society. For years they’ve been experiencing adrenaline and adventure. And now they’re expected to slide right back into being domestic women.

Professor Theidon remembers one campaign by the Colombian Defense Ministry, to coax women out of the rebel forces. “It was a poster that looked as though it was a lipstick ad. It was glossy. And a woman was smiling and she was perfectly made up. And it was about 'free yourself.' ... 'Guerrillera, demobilize and feel like a woman again!'"

If Colombia manages to sign a peace deal with the rebel forces, it would be historic. The longest active war on this side of the planet would be over.

But here’s the challenge: There are still more than 17,000 fighters out there, in the mountains and jungles. They will suddenly be expected to reintegrate into society. A lot of them are women, like Xiomara. Theiden says in order for any peace deal to work, the government will have to rethink how it treats female combatants.

“I think the program is understood as, you’re demobilizing men, because armed men are seen as a security risk," she says. "The message to the women is, ‘redomesticate.’ Let’s get you back into the lipstick, back into the home. ... And it’s a very reactionary, backward-looking, kind of understanding of what these women might be wanting after years of seeing themselves as political protagonists.”

Xiomara doesn’t really have friends. She certainly doesn’t have girlfriends. Think about it: From age 14, to 30, she was out in the jungle and the mountains. And now she’s back, and she can’t talk to anyone she knew back then.

She invites me to the back of the house for a cigarette, on a porch overlooking a canal. The water is dirty, but it’s peaceful out here. And for a few minutes her husband isn’t hovering over us. Which is when she talks about what is eating her up. “It got me sick. It got me real sick. The birth control really messed me up. I can’t have children.”

In much of Colombian society, not being able to have children is considered a failure as a woman. Away from her husband, I ask her: If she could, would she go back to fight with the rebels?

Dusk has fallen, and it’s getting dark in the glen. It’s time for me to go. When she says it, it sounds like a demand, but later on listening to the recording of our interview, she sounds childlike.

“Why are you leaving so soon? Why don’t you stay longer?”

So I stay for another cigarette. And then I really have to get going.