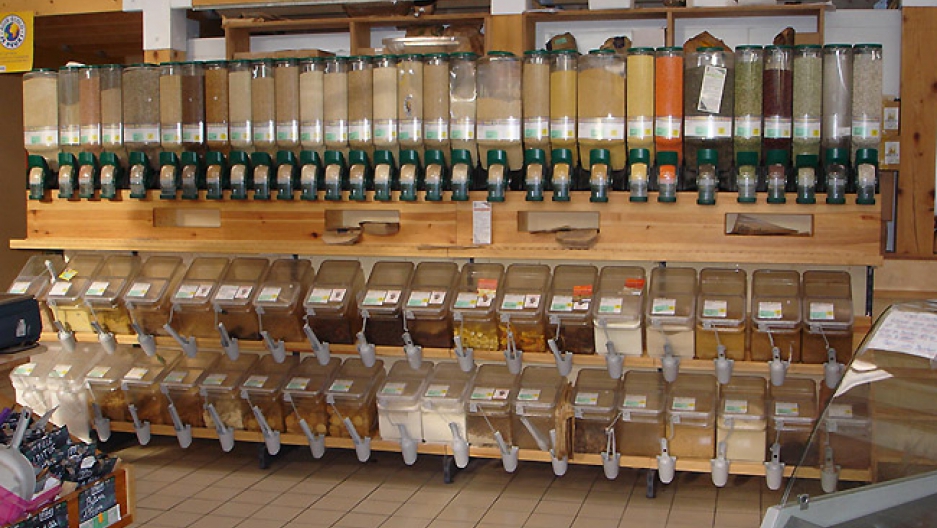 If you’re like most people, you probably have a fridge and cupboard with too many half-used packages. You need only a cup or two of some ingredient, but you have to buy a pound or a quart, and what’s left often goes stale and ends up in the garbage.

That waste is part of the reason Sarah Metz decided to launch a new store called the Fillery.

The Fillery is designed to reduce waste and save money: Shoppers will bring their own reusable containers and buy only what they need. The store hopes to open its doors in the New York City borough of Brooklyn, later this year.

A lot of co-ops currently have a bulk section, but, unfortunately, many of them do not allow their customers to bring their own containers, says Metz. Her store aims to change this.

“We'll have everything from nuts and seeds to baking ingredients, whole grains, coffee and tea, probably more than 100 different spices,” Metz explains. “We'll also have liquids, like syrup and oil and vinegar. Even a few household cleaning products will be available for refill.”

Milk won’t be available for refills, but there is a farm in the region that sells milk in glass bottles, “like in the old days,” Metz says. When shoppers return a glass bottle, they can buy a new bottle of fresh milk.

The Fillery will offer customers fresh produce through a community-supported agriculture (CSA) program, which supports local and regional farmers. Once a week, the farmers will deliver produce to the store, and customers will be able to pick it up.

Metz was inspired to open her store when she moved to Brooklyn a decade ago and saw the incredible amount of waste generated in New York City. “I was just shocked,” she says. “I thought back to a store I shopped at in Michigan, a small bulk store, and I really loved that concept. After 10 years of living in my neighborhood, nothing like that exists, so I just decided to do it myself.”

The store’s success will largely depend on changing the habits of shoppers, Metz says. “Teaching people to buy only what they need is going to be a big part of reducing food waste,” Metz says. “Community education is a big part of what we hope for the Fillery to offer, and part of that will be teaching people how to plan their meals and how to buy in quantities that are usable for them before the product goes bad.”

Most people aren’t used to carrying around their own containers, just in case they happen to go shopping. This is especially true in a fast-paced, walking city like New York. “That's one concern that many people have — just the feasibility of carrying around their own containers if they're not necessarily planning to go grocery shopping,” Metz acknowledges. “We will have compostable paper bags available for dry goods for free for all customers. We will also have other containers for purchase, everything from jars and tins and bottles for the liquids. Nothing plastic.”

Suppliers, too, will have to re-think their operations, Metz says. Much of the waste in the US food system begins at the supply-chain level, most of it in the form of packaging. Consumers don’t always see this waste, but businesses have to deal with it.

“One misconception is that packaging means a fresher and cleaner product, when that is not necessarily the case,” Metz explains. “What we don't realize is that a packaged food item has been sent from the producer to the packaging facility, and then from there to another facility and then to the distributor. A lot of the shelf life for a packaged item has been eaten up just in transport. This is not the case when they are buying it from the bulk store.”

So far, the response to her planned store has been “fantastic and somewhat overwhelming,” Metz says. “I certainly didn't expect this much attention. Emails just about every day from residents in the community wanting to help out in whatever way they can, or from people offering their services — everything from architecture to design services.”

Metz hopes the Fillery will become a community gathering place, where people come to learn new recipes, start dinner clubs at their homes or just cook more and spend time together in the kitchen and over a good meal.