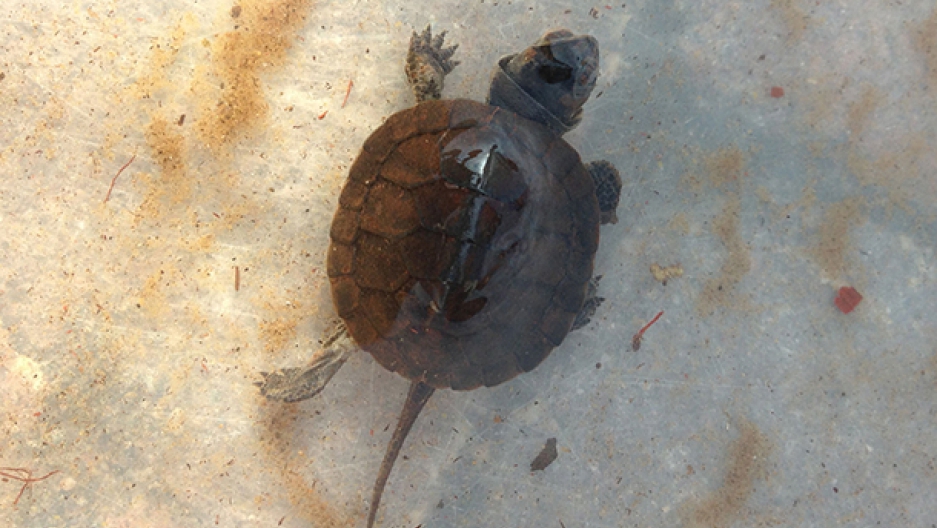 Blanding’s turtles have about a 1 in 80 chance of living to be adults. So, a nonprofit in Boston is working to shift those odds and give baby Blanding’s turtles a better start. They're being helped by some Massachusetts students.

Sending these baby turtles to schools, where young humans can care for them and raise them for a year, can give a big lift to this regionally threatened species, says Bryan Windmiller, executive director of Grassroots Wildlife Conservation.

“We call it 'head starting,' like from the human Head Start program,” Windmiller says. “We give the little turtles a head start in life. We give them at least a 40-fold increase in their chances of surviving to adulthood.”

The head start cycle begins each summer during turtle-nesting season, when Windmiller and his team search for the mother Blanding’s nests to protect them. Earlier this year, PRI’s Living on Earth joined Windmiller and a team of biologists as they searched for and tried to protect the nests of Blanding’s turtles. Living on Earth’s Don Lyman returned to the nests that Windmiller observed in June, to find out how many eggs hatched.

Windmiller was particularly curious about Turtle #2028. This past June, the turtle made her nest in the garden of a suburban house, a choice that can be perilous for both the mother and its young.

When he went back recently to check on the nest, he opened the wire-mesh cage he had placed around the nest to protect it from predators, like skunks and raccoons. A large, yellow sponge that he'd placed there, too, still sat on top of the soil — to keep it moist.

“We water the sponge, and we usually overwater it, so we’re actually watering the nest a little bit, too, just to make sure the eggs aren’t dehydrating,” Windmiller explains. “The soil’s been so dry. The only thing is, we didn’t start doing that till August, and it was incredibly dry before then, too. So our concern is that some of the embryos might have perished back in July, when it was really hot and dry, as well.”

Two young elementary school students, Ana Gracia and Marco, joined Windmiller and his team on their investigation. They carefully dug into the nest with their hands and soon found one very, very small, young turtle, alive and well. “That’s the other thing that we sometimes find,” Windmiller explained. “You dig down, and you find that the turtles have hatched already.”

As tiny hatchlings, baby turtles face a variety of hazards, as they’re only as big as a quarter, and their shells are flexible.

“With that very thin, flimsy, flexible shell and tiny size, they get eaten by garter snakes, bullfrogs, blue jays, crows, people’s cats, people’s dogs, anything you can imagine,” Windmiller said. “Some of them are killed by insects, sometimes by ants. When they get in the water, there are various aquatic insects that can kill them. Plus, they get run over by cars, they get run over by people on bicycles. I mean, they’re just so tiny and so vulnerable.”

After finding this first turtle, Windmiller decided to leave the nest alone, to allow the rest of the hatchlings to dig their own way out. But when he returned a couple of weeks later, he found that no other baby turtles had emerged since his last visit with Marco and Ana Gracia — and time was running out for the cold-blooded turtle hatchlings.

“At this point, because the weather’s cooling down, it becomes harder and harder for the hatchlings that are underground to have the energy to dig themselves out,” Windmiller said.

Windmiller found one more live baby turtle and two more eggs with embryos that were no longer viable. All in all, Turtle 2028 laid four eggs in her nest. “That’s less than half the size of a typical Blanding’s turtle clutch, and two out of the four survived, which is also low,” Windmiller said.

Normally about 80 percent of eggs produce hatchlings. The low survival rate of the eggs of these threatened turtles seems to be a trend this year in New England.

The US Fish and Wildlife Service is monitoring the only relatively large population of Blanding’s turtles left in Massachusetts, around 60 nests, Windmiller said.

“Their average hatching success was just over five hatchlings per nest, and that’s very low. I would say drought is my first guess as to why that’s been the case. ... The good news is we’ve got a baby who looks healthy, and this is the second one from this nest, and we have a lot of fourth-graders in Concord who are really looking forward to meeting their turtles,” Windmiller said.