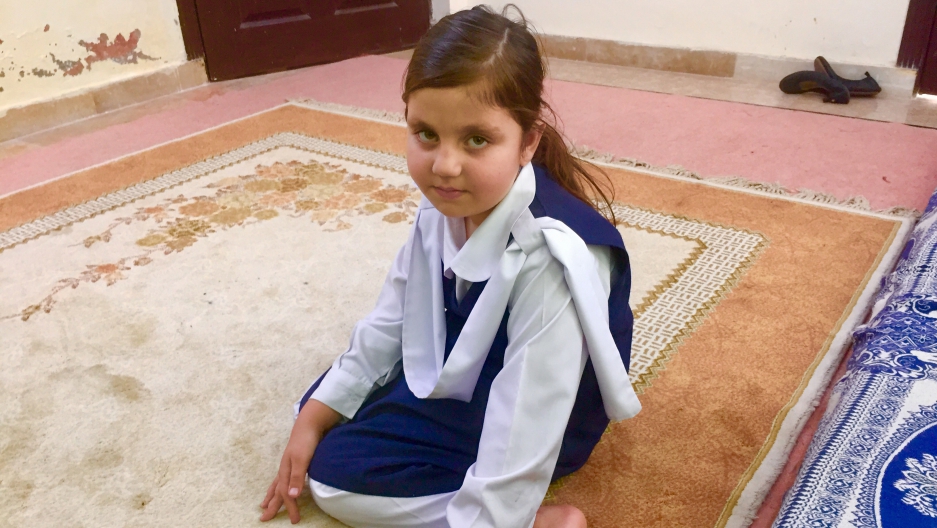 Eman Khan is 5 years old. She had to leave her home in North Waziristan because of an ongoing US-backed Pakistani military campaign in the region. She lives in Islamabad with her family.

It took Seema Khan and her family two years to build their family compound in North Waziristan. They had three days to get out.

“The situation was all of a sudden worse,” she recalled.

Her family left their newly built home in June 2014. That’s when the Pakistani military launched a US-backed offensive targeting extremists in the northwest border region. The US is funding the war with nearly $1 billion in military aid this fiscal year alone.

About a million people fled North Waziristan and the nearby Khyber region along with the Khans in 2014. They left farm fields, livestock and houses full of memories behind.

“I’m missing everything, like my house, my precious household items, and all that furniture,” Khan said. “Everything which I loved, I am missing all that.”

“Being a Pashtun lady, we don’t go out from our houses,” said Hawla Khan, Seema’s daughter.

In Waziristan, Hawla, who is in her mid-20s, says they could leave the family compound to visit relatives. But now everyone is scattered.

The Khans do miss their home. But even though they’re stuck in this small apartment, they say their lives have actually gotten better since being displaced.

The benefits of relocation

“We are kind of happy here because there are the basic facilities,” Seema Khan said. “In Waziristan we were lacking those kinds of facilities. ... [Here] our children are getting education and we are living in a very peaceful environment.”

Five-year-old Eman Khan was wearing her school uniform and backpack when reporters arrived to her family’s house. She wouldn’t have been able to go to school back home. Her sister Hawla never did.

“Her future will be bright,” Hawla Khan said. “She will be happy. She won’t be uneducated like us, because she has an opportunity here.”

The family has better access to healthcare in Islamabad, too.

Asma Khan, who married into the Khan family, pointed out the dangers of childbirth in Waziristan. She knew three women who died during labor in a one-month span a few years ago.

Around the world, nearly half a million women die giving birth each year because they do so without any medically trained assistance. But that wasn’t the case for the women Khan remembers.

She said the problem in her hometown is that there are no nearby female doctors who can help during life-threatening deliveries.

“When there aren’t any female specialists, we get referred to male doctors,” Asma Khan said. “And the male members of our family won’t let us be treated by them. So, many women have lost their lives in difficult pregnancies.”

For women, displacement can be an opportunity.

The Khan women aren’t the only ones saying that, in some ways, their lives are better post-displacement.

Lawyer and gender rights advocate Rukhshanda Naz has interviewed more than 150 displaced women since the offensive started two years ago.

Unlike the Khan women, many she spoke to felt stifled when they lived in their home regions, afraid to leave their homes due to fear of sexual assault from militants.

“For days, they were not allowed to come out from their house,” Naz said. “It was self-imposed imprisonment for women.”

Leaving that environment and living in displaced persons camps or host communities, where government agencies and NGOs can provide much-needed services, has given women a chance to access literacy and skills training programs.

“When we interacted with women in different camps and in the host community, we considered displacement for women an opportunity,” Naz said.

The US government funds the military operation that has forced hundreds of thousands of people from their homes.

But it also gives humanitarian aid to the people who have had to relocate. The United States is helping Pakistan rebuild critical infrastructure in the country’s tribal areas, and providing emergency humanitarian aid like water and food.

In 2015, Secretary of State John Kerry pledged $250 million for the rehabilitation of the federally administered tribal areas in Pakistan. The US added more than $11 million to that in fiscal year 2016.

The Khan family recently learned that the government has given tribal leaders permission to repopulate their region in North Waziristan as soon as next month.

But the family doesn’t really want to return, especially the women.

The Khans are among the lucky ones: The new house they lived in for just two months before fleeing North Waziristan is still standing. But it’s in bad shape. It’s been ransacked and overtaken by weeds. Light fixtures have been ripped out of the ceiling and there are animal droppings everywhere.

However, they don’t know if they’ll be able to stay in Islamabad.

Right now, the family gets about $180 a month from the Pakistani government. Once that stops, Asma Khan doesn’t know if the family could afford to stay in the city.

“We’re wondering how we’ll earn money,” she said. “How would we pay the rent, and how would we get a job?”