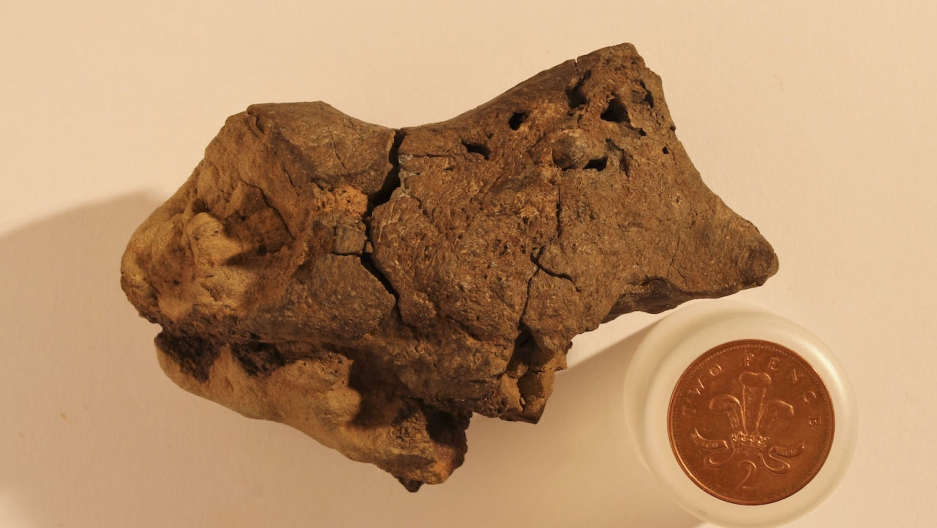 A tiny bit of Iguanodon brain.

Back in 2004 Jamie Hiscocks was taking a walk on the beach in the south of England when he spotted a small brown pebble — just a few inches across. He could easily have kept walking or moved on to hunt for a more colorful stone.

But this one caught his eye. He picked it up and took it home.

And now more than a decade later, the true history of that pebble has been announced. One hundred and thirty million years before Hiscocks found it — give or take a few million — it had been a brain. An actual dinosaur brain, now fossilized.

According to Cambridge University's Alex Liu, who was involved in studying the brain, this is the first time that dinosaur gray matter like this has ever been found fossilized. "It's remarkably unexpected, actually, that we are finding soft tissue preserved in a brain particularly," he told the BBC. "Because a brain is usually locked up inside the skull and so never comes into contact with sediment. So it was previously considered that finding a fossilized brain — or at least the soft tissues of it — would be very very unlikely indeed."

The original owner of this scrap of brain is believed to have been a relative of the Iguanodon, a slow-moving, plant-eating creature, sometimes described as the cow of the Jurassic and Cretaceous periods.

To have had its tissue preserved like this, the unfortunate creature would have fallen head-first into water at the point of death, and then been affected almost immediately by chemical reactions inside the skull, scientists say. Millennia later, it also needed to be found by Hiscocks at just the right moment to avoid being further ground up by the wind and tides of a British beach.

An incredible amount of detail remains on the fossil. It is so well preserved that even microscopic capillaries (miniature blood vessels) can still be seen on the surface. Liu believes that other structures may also be intact deeper inside.

All of which raises the possibility that other soft dinosaur parts may be preserved around us, without our ever having noticed. Watch where you step next time you're at the beach.