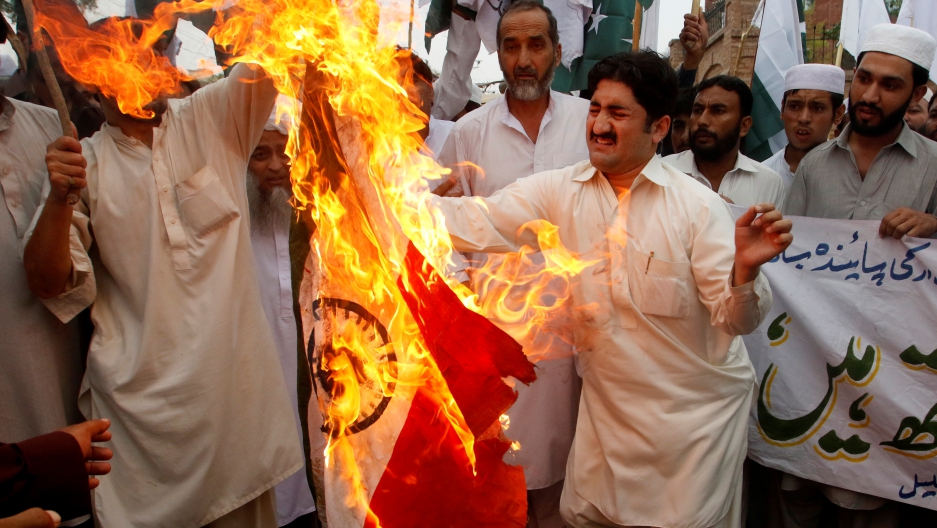 Pakistani protesters burn an Indian flag during a protest against the recent border clashes, in Peshawar, Pakistan September 30, 2016.

Last year around this time, we were saddened by the death of our poet and journalist friend Haider Rizvi in Lahore, Pakistan, on Oct 29, 2015. Haider had lived in New York, and was for many years a correspondent for the Inter Press Service (IPS), based at the United Nations.

With Haider’s untimely passing, we lost someone who loved to make friends irrespective of religion, color or caste — someone who believed firmly in peace.

At this crucial moment, when the ruling elites and their cohorts in India and Pakistan are again beating war drums, with hate and violence raising their ugly heads in the region, we need a voice like Haider’s now more than ever before.

An icon of secularism who rejected the division between India and Pakistan based on British-imposed political boundaries, Haider was an activist and a gentle being who loved to laugh and loudly recite his poetry. Having migrated to the US from south Asia, his open and inclusive lifestyle often reminded us of the artificiality and meaninglessness of political divisiveness.

Americans were amazed by this person who epitomized the oneness of the nearly two billion people from the Indian subcontinent. Through Haider, they learned of the commonality of history, culture and traditions across South Asia. The British colonialists severed the land but could not sever the thousands of years of common history.

Unfortunately, India and Pakistan have never found peace. They have engaged in several bloody wars over territorial issues like Kashmir and Bangladesh — three full-blown military conflicts and countless other, small-scale acts of armed invasion and counter-invasion. Since both countries tested nuclear weapons in 1998, such conflicts had an even more ominous edge.

The issue of Kashmir — who owns it and how much of it — continues to fester. Both India and Pakistan claim Kashmir as their own. In the 1960s, a Chinese invasion took over a piece of Kashmir from India, but the part remaining under Indian control has remained a turbulent, volatile politico-geographic zone, a situation not too different from the one in Palestine.

Politics coupled with lack of resources and extreme poverty have bred mistrust, rejection, and militancy. The policies of successive Indian and Pakistani governments have exacerbated the situation, with India’s brutal suppression of the Kashmiri uprising and militant attacks emanating from the Pakistan side.

In late September, militant attacks in a remote, hilly and snowy area of Kashmir called Uri catalyzed India’s forceful retaliation — a “surgical strike” against Pakistan that Pakistan denies took place. There is currently an atmosphere of ugly, violent jingoism in both India and Pakistan, fed by traditional and social media.

Militant attacks, especially since the beginning of this millennium, have killed many innocents across India in cities like Mumbai, Delhi, Bangalore, Calcutta and Ahmedabad. Many Indians in this Hindu majority country are increasingly fearful and angry.

Politicians and media personalities in India, a coalition government led by the right-wing, ideologically pro-Hindu BJP, are openly calling for revenge against Pakistan, the country they see as responsible for the attacks. After Uri, social media discussions have filled cyberspace with calls for the “invasion and elimination” of Pakistan.

The bullying tactics of right-wing groups in India stopped the release of a much anticipated film starring a Pakistani actor; its producer released a video of himself on social media apologizing for this "transgression," affirming his patriotism, and appealing for the film to be allowed. Fearing backlash, the Mumbai Academy of the Moving Images dropped the screening of a celebrated 1950s film made by Indians with Pakistani talent.

In Pakistan, militants acting in the name of Islam have attacked churches, imambargahs (Shia places of worship), schools, marketplaces, mosques and buses carrying pilgrims. Their attacks have claimed more than 50,000 civilian lives and the lives of 10,000 military and police officers over the last decade or so.

This cycle of violence, bloodshed and war in the name of religion and nationalism must stop. Many of us, including Indians and Pakistanis living abroad, have ancestral roots in both countries. Our forefathers — Muslims and Hindus — lived harmoniously together for centuries.

We refuse to allow these extremist sections of society that are fanning the flames of hate to prevail. We see a similar pattern in America, where even a presidential candidate feels he can generate support based in the politics of fear. The resulting media attention and social media amplify such voices, making them appear stronger and more powerful than they are.

We urge the Indian and Pakistani governments to resolve their political issues through diplomacy and dialogue. Violence andthreats are not the answer. Terrorism must stop. So must military aggression.

We urge the United Nations and the next US administration to actively engage India and Pakistan in a new series of talks and resolve the Kashmir problem. Kashmiri men, women and children must find peace and prosperity, and emerge from their desperate cycles of poverty and hopelessness.

We believe the vast majority of people in both India and Pakistan want peace.

Our late friend Haider Rizvi would want it too. At a memorial gathering of his Pakistani and Indian friends in Brooklyn last year, we pledged love, friendship and togetherness, and promised in his name to fight violence, hate and war.

We will keep that pledge to our beloved friend.

Partha Banerjee, originally from India, is a human rights activist, labor educator and writer based in New York. Beena Sarwar is a journalist and activist from Pakistan now based in Boston, teaching a journalism seminar at Princeton University this semester.