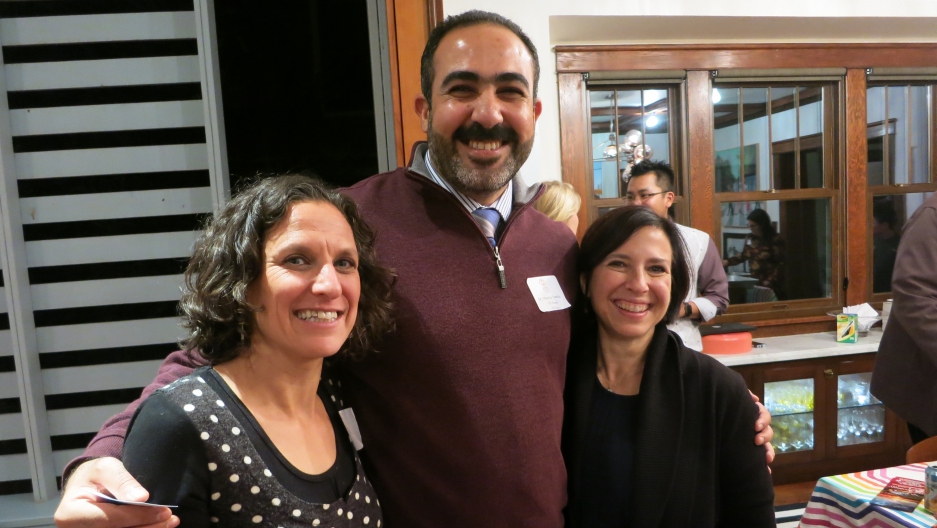 A decade ago, Marwan Sweedan was performing surgeries in Iraq. At the time, his family was working with coalition forces, and they became targets.

“My dad got captured, kidnapped, tortured and killed,” says Sweedan.

He says doctors were also being marked, so he applied for refugee status and was later relocated to San Jose, California.

“Being a refugee is not something you plan for, you don’t wake up in the morning and go, ‘I’m going to be a refugee today.’ No, it just happened,” says the 37-year-old Sweedan.

“It was a cultural shock to me coming to the United States, and I didn’t understand what’s going on, and everything was collapsing around me, my world was collapsing. So the first job, and the only job I found at that time, was selling hot dogs in a mall, Santana Row, in San Jose.”

He laughs, looking back at it, saying, "It was a fun job to be honest, I learned a lot.”

The US will take in close to 70,000 refugees this year from across the globe. Being a refugee isn’t easy, leaving behind friends, family, and, for many, careers. For highly educated workers — with occupations like doctors, engineers, and lawyers — being a refugee in the US generally means starting over.

But a program in Boise, Global Talent Idaho, or GTI, is helping refugees find jobs more suited to their backgrounds.

Tara Wolfson co-founded the nonprofit two years ago. She was working with a refugee resettlement agency and often saw people’s talent, education and expertise not being used.

“I just decided that I couldn’t look in the mirror any longer if I knew that a doctor was mopping floors or an engineer was working on an assembly line, picking raw meat off of it,” says Wolfson.

She explains that resettlement programs in the US aren’t designed to help people land professional jobs. “The goal of the refugee resettlement system is early self-sufficiency — and that is the first job you can get as quick as possible.”

Her organization has helped clients like an engineer working in an onion processing plant and an IT specialist stocking shelves overnight at Wal-Mart. In two years, Global Talent Idaho has placed about 125 refugees and immigrants into higher-skilled work more appropriate to their skill set. On average, people who complete the GTI program are now earning $26,000 more. And all of those higher salaries have pumped roughly $1 million into the local economy.

The course, which typically takes about six months, helps newcomers improve their English, polish their résumés and do mock interviews. GTI’s program manager, Gina Finley, says many refugees simply don’t know how to market themselves here.

Albert Makuna goes through a mock interview through Global Talent Idaho. Makuna was a neurosurgeon in the Democratic Republic of Congo before he came to the US as a refugee. His first job in the US was sewing hot tub covers.

Sweedan, who had relocated from California to Idaho, was making these mistakes before GTI honed his interviewing skills.

“[GTI instructors] make your experience into a good story that the employer will be interested to see.”

I asked Sweedan what he could possibly have been doing wrong — he came across as a nice, intelligent, instantly likable person.

“Let me tell you something, I learned the term ‘overqualified’ in the United States, because you put everything on your résumé,” Sweedan says.

Employers were understandably confused why a surgeon was applying to deliver pizza (he did that, too). Once the talent nonprofit stepped in, Sweedan got hired as an infection prevention specialist, keeping operating rooms clean. He’s back in a hospital, but it’s a long way from performing surgery.

“I think that I’m using my experience, but not to full capacity,” he says.

At least he’s making better money, not the same salary a surgeon draws, but it’s a start.

A few other cities also have programs like Global Talent Idaho. One's called Upwardly Global, which has branches in San Francisco, New York, Chicago and Silver Spring, Maryland. These organizations can help highly skilled refugees get back on their feet, but not all the way back — certain occupations come with barriers to entry.

“Law and medicine are [professions] that, if you’re coming to the United States from abroad, it can be very difficult to enter into ... due to the bar exams and the licensing boards and all that come in with that,” says Bill Kerr, a professor at Harvard Business School. “Occupational licensing can be quite common, even to become a hairdresser or a barber.”

To become a licensed physician in the US, Sweedan would need to study for and pass three highly rigorous, and expensive, board exams. Then, he’d need to get accepted into a residency program, competing against recent US medical school graduates. If he works like mad and all goes smoothly, it could take him four to five years to get back to where he left off in Iraq, working as a doctor.

He says, don’t count him out.

“I’ll never let go of that dream,” says Sweedan. “I worked hard for my degree in Iraq, and I’m going to work hard again, but eventually I’m going to make it.”

Categories:
Business, Economics and JobsBusinessGlobal Nation
Tagged:
BoiseIdahorefugees in the US