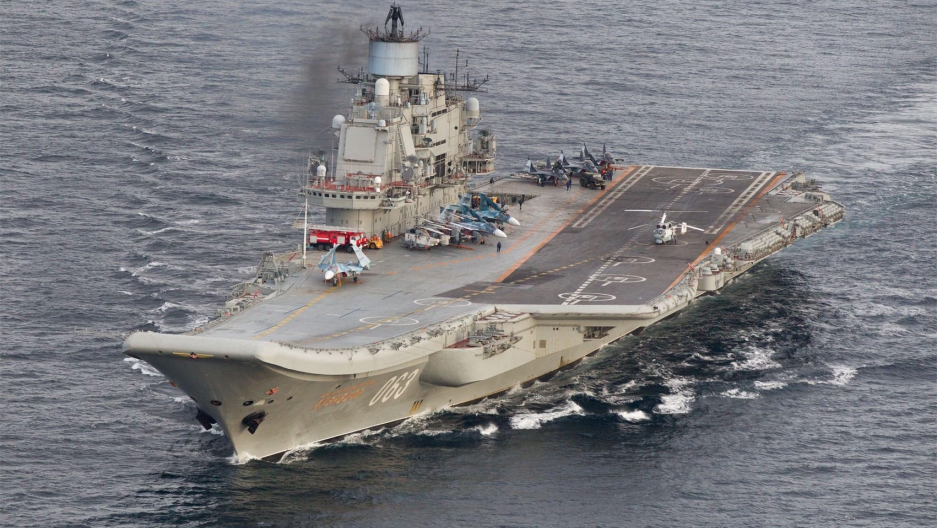 A photo taken from a Norwegian surveillance aircraft shows the Russian aircraft carrier, Admiral Kuznetsov, in international waters off the coast of northern Norway, on Oct. 17, 2016, en route to the Mediterranean.

If you're living in Russia right now, you might think World War III is just around the corner.

State-controlled media is warning of possible US attacks. (One recent story warned, "Schizophrenics from America are sharpening nuclear weapons for Moscow.") Everyone in Moscow is now supposed to have access to a bomb shelter. The military has moved missiles closer to Western Europe. And earlier this month, the Russian government carried out a massive three-day civil defense exercise to prepare for a nuclear attack. Forty million people reportedly took part.

But nothing in Russia is ever as plain it seems.

“I have absolutely no idea where my local bomb shelter is,” says Steve Rosenberg, the BBC’s Moscow correspondent. “Or whether they’d let me in.”

“I didn’t actually see anyone myself who was taking part in an exercise,” he adds. "So I’m not sure if that [40 million] figure is actually accurate.”

But there's no doubt Russia has been making a show of force. In just the last couple of weeks, the Kremlin has made several provocative moves:

“Certainly,” Rosenberg says, “the authorities have been flexing their muscles.”

Rosenberg argues there are several reasons why this is all happening now.

“Let’s look at Syria first," he says. "I think Russia is using this moment in time — the time that America is bound up in its domestic affairs with the upcoming election — ... to achieve military victories on the ground, and give [Syrian President Bashar al-Assad] and Russia a stronger position in any future negotiation.”

In addition, he says, Moscow is "sending a very strong message to the West, particularly to Washington, that Russia considers itself to be a global power which demands respect.”

But Russian President Vladimir Putin isn't “a suicidal president,” says Rosenberg. "President Putin does not want a military confrontation with the United States.”

He says no one is expecting a new Russian land grab, like its annexation of Crimea in 2014.

But there’s a big danger of miscalculation.

NATO has responded to Russia’s moves by bolstering its forces in the Baltic Sea, and continuing with its plans to deploy a missile defense system.

Russia sees those kind of steps as aggressive, says Rosenberg.

But direct conflict is in nobody's interest.

“It’s hard to believe Putin, [US President Barack] Obama, [UK Prime Minister] Theresa May, anybody, would want a military confrontation between East and West," Rosenberg says. "You’d like to believe that. But everything that’s been going on in the last couple of weeks suggests that things are slightly getting out of control.”

“There don’t seem to be the checks and balances that perhaps existed in the Cold War,” he says. “You know, the Cold War was dangerous, and the threat of nuclear annihilation hung over the world, but both sides realized that, and there were kind of rules. But now Putin has kind of torn up the rulebook, and I think the West is struggling to work out what the rules are now.”

A new US president will be thrown into the mix soon. But that could be a good thing.

“Maybe the US election will be a watershed,” Rosenberg says.

Putin said on Thursday that Russia will work with any president who’s elected, to solve any problem.

“So perhaps that is a signal,” Rosenberg says, “that once the US election is out of the way, there could be a clean page, and they’ll try to sort things out. But at the moment, it does look quite tense.”