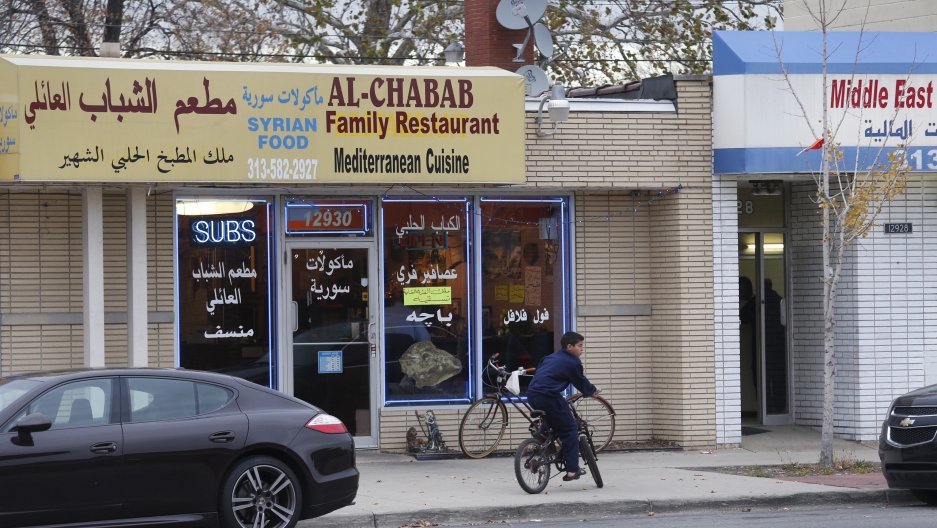 A Syrian restaurant is on Warren Avenue in Dearborn, Michigan. The 2010 US Census tells us Dearborn is home to just under 100,000 people. According to studies, some 30 percent are Arab American. The town is known for its large Lebanese American population.

It's easy to label some things — like food ingredients or the materials in clothing. But labeling people? That can be trickier.

Still, every 10 years, Americans are asked to fill out a census form and choose their ethnicity or race.

That's one reason a new proposal by the US Census Bureau is stirring controversy. The Bureau is considering adding an additional box to the mix: It's a category known by its acronym MENA that would ask people to self-identify as having Middle Eastern or North African descent.

Maya Berry, the executive director of the Arab American Institute, thinks the proposed new census box would be an important achievement for almost 4 million Americans who trace their roots to the Arab world.

"The Census is how the federal government makes determinations on the spending of our federal budget and hundreds of billions of dollars," Berry says. "When the Department of Education, for example, wants to make a determination on where they may need an English as a second language program, it would be useful to know where there's a high concentration of newer immigrants from the Arab world who might need assistance."

"Who's going to have access to that list? Is it going to be like the infamous no-fly list? Can someone get off that list?" she asks. "There are just so many questions going through my mind when I'm thinking about this topic."

Basatneh was born in Syria, raised in Chicago, and now lives in Miami, where she's a human-rights activist and a writer at the website Fusion. She says if the Census Bureau does add a MENA box, she'd be conflicted about checking it.

"Donald Trump calls for a total and complete ban on Muslims entering the United States? Of course, I'm going to think 10 times before I check that box," she says. "There are just so many politicians, so many reasons that are labeling us as outsiders, and I want to be an insider."

Another take on identity: I'm white in Barcelona but in Los Angeles I'm Hispanic?

"The value of arriving at a better category for our community far outweighs the risk, particularly with regards to a government surveillance program — because frankly it's happened without the MENA category and regrettably I trust it will continue to happen by some agencies," she says.

The US Census Bureau is bound to very high standards of confidentiality. They are not allowed, by law, to identify respondents to their surveys.

Berry says adding more detail to the Census would be the sort of change that would make life less confusing for the next generation. She notes the situation of her two children enrolled in her local school district.

A decision about whether to add the MENA box to the next Census form isn't final yet. A new form would need congressional approval in 2018, in time for the 2020 count.

History: More American than apple pie, Muslims have been migrating to the US for centuries