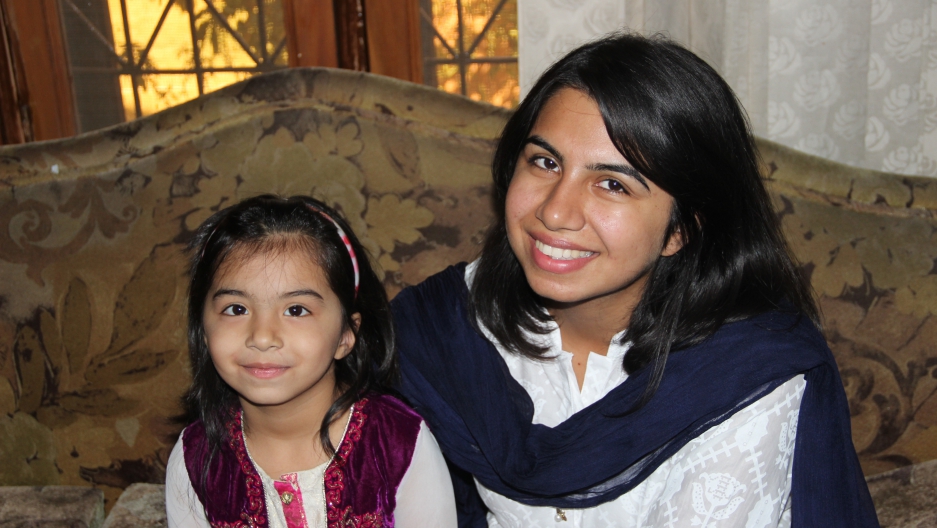 Umaima Awan sits with her mother, Um-E Salma, at the family’s house in Jauharabad, Pakistan.

This is what Um-E Salma remembers about her wedding day.

“Before I started to dress up I closed my room and I cried a lot, and I told myself that this is all you are going to cry for the rest of your life.”

She was transformed from an over-achieving tenth-grader into a bride terrified of what would happen on her wedding night.

“I was not educated about the subject even,” Salma said. “I was really scared of him coming in the room so I went to the washroom and I locked myself up.”

Salma's family arranged the marriage in order to win allies in a decades-old dispute.

When Salma, now 23, looks back at that night, she wonders how many other girls experienced the same fear she did.

One in five girls in Pakistan gets married by the age of 18. Many are poor. And many get pregnant quickly, drop out of school and pass their hopes and dreams on to their daughters.

Salma didn't want that future. She agreed to the arranged marriage only after her husband’s family promised she could stay in school. And she did, even after getting pregnant at 17.

She remembers being seven months pregnant, climbing four flights of stairs to her classroom.

“It was hard, and if I think back now I really wonder, how did I do it?” she wonders. “Maybe I didn’t know that it was hard. Nobody told me it's hard so I just did it.”

Salma is an extraordinary success story, but most aren’t so lucky. Some girls are married off to settle debts, others to lessen economic pressure on the family. The US government has called child marriage a “human rights abuse” and made reducing early and forced marriages a key goal of its 2016 US Global Strategy to Empower Adolescent girls.

But there’s not a single USAID program targeted explicitly at ending child marriage in Pakistan.

USAID officials say they do integrate efforts on child marriage into their other programs in Pakistan, such as education, community awareness, and economic development programs.

They point to a big push to increase access to education for girls, including a huge $70 million education initiative called “Let Girls Learn” that first lady Michelle Obama announced in Pakistan last year.

Child rights experts say access to education for girls is a key component of reducing child marriage, but it won’t work on its own. Changing societal norms and the social structures that allow families to marry their daughters off is important too.

“The reason is simple: the girls have no power,” said Anees Jilani, a lawyer and founding member of the Society for the Protection and Rights of Children in Pakistan.

Education can empower girls to speak their mind, but that won’t necessarily help them avoid marrying young.

“You may train them to air their views but once a male member of the family asks them to shut up, they will have little alternative but to comply,” says Jilani.

Jilani and other advocates in the US and Pakistan say addressing only education, instead of the underlying gender discrimination that makes child marriage possible in Pakistan, is less effective than a more comprehensive approach that includes public outreach through media campaigns and sexual and reproductive rights education.

After giving birth to her daughter, Um-E Salma went on to study engineering at a prestigious Islamabad university and finished her degree this summer.

Her husband didn’t like her career ambitions, and they split about a year ago. 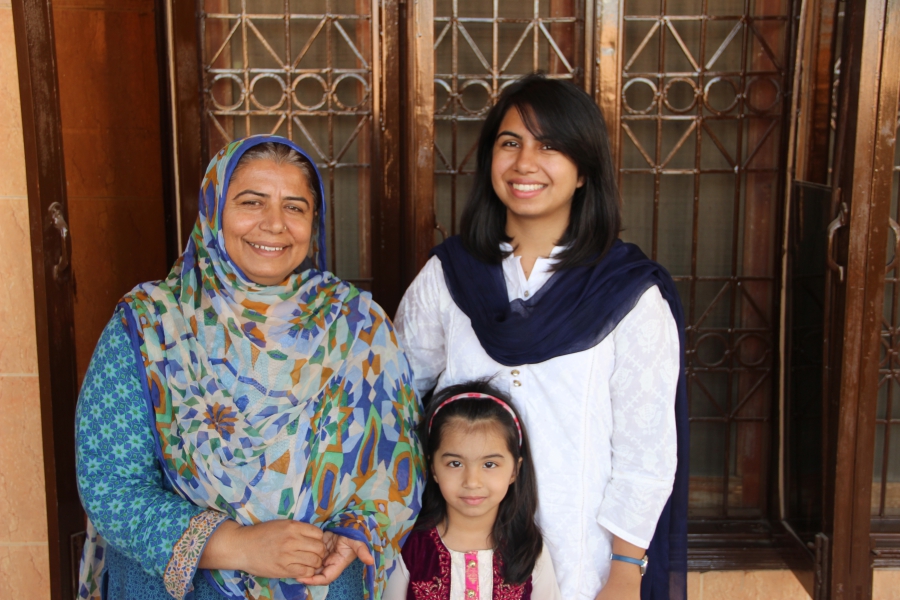 Shafqat Munir stands with her daughter, Um-E Salma, and her granddaughter, Umaima Awan outside her home in Pakistan. Grandmother and granddaughter live together while Salma pursues an engineering degree.

Salma visist when she can, usually about twice a month.

Soon she'll start a job with an international oil and gas company and will spend three weeks a month working on an oil rig in southeastern Pakistan.

Juggling single parenting and career ambitions is not easy for Salma. Sometimes Umaima doesn’t even call her “mom,” but uses the Urdu word for “older sister”.

Salma says she misses her daughter, but sees her career as a way to build a better future for her daughter.

"I had to do this,” Salma says, “because eventually where I want to be and where I want my daughter to be, this is I think the sacrifice time for both of us.” 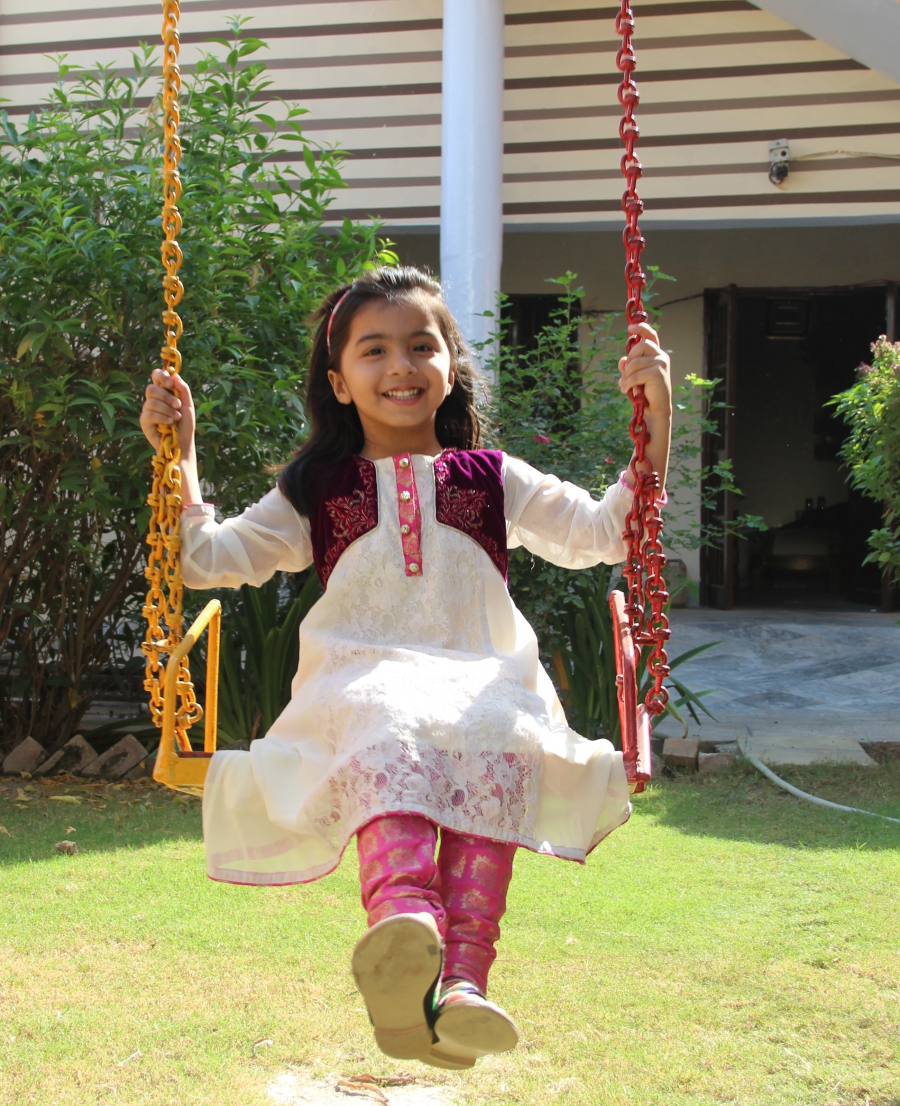 Umaima Awan swings outside her home in Pakistan.

Munir recognizes the toll early marriage has taken on her daughter.

“If she hadn’t had the added responsibilities of marriage and children, maybe she would be able to excel more,” Munir says through an interpreter. “I feel guilty about this.”

The child marriage rate in Pakistan has dropped by half in the past two decades. Sindh, the country’s largest province, recently raised the legal age of marriage from 16 to 18. A similar law was proposed at the national level, but was thrown out after being deemed un-Islamic.

Advocates say the toughest part of reducing child marriage rates is changing attitudes about the practice.

Programs run by Pakistani NGOs and backed by the Dutch and Canadian governments are trying to shift the needle in Pakistan by teaching girls about the health risks of early marriage and pregnancy, and training them to advocate for themselves.

That hard work has already been done in Um-E Salma's family.

Salma was 17 when she was married. So was her mother. Both of them want things to be different for 5-year-old Umaima.

When her daughter grows up, Salma says, if her daughter has a moment of doubt and asks herself what her mother would do, "that would be all my struggles rewarded."